What’s great about using vaporizers or slick vape pens isn’t just the fact that it’s a healthier alternative to smoking, but also because it comes in a variety of flavors to choose from for the satisfaction of your tastebuds! From cotton candy down to chocolate, you can find something yummy to have for vaping.

However, did you know that there are some flavors that have their own disadvantages as well. That’s why it’s important to choose the right flavors and know what to avoid. So read on as I show you the flavors all vapors might want to avoid! 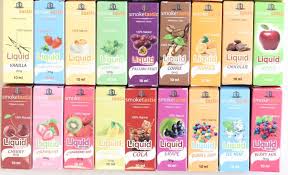 When you’re in a vaping store looking for liquids to choose from, then here are the top flavors to avoid:

While cinnamon is known to have their own health benefits, that’s not the case with the vape flavor! Did you know that the chemicals used to create the cinnamon flavor are one of the most toxic, which can damage your white blood cells in the long run?

In a study from the Frontiers in Physiology, the cinnamon flavor is known as the most toxic one! So even if it smells delicious, it’s best to avoid using this flavor as much as possible.

Besides cinnamon, vanilla is also at the top of one of the most toxic vape flavors on the list! It’s a plain flavor but the chemicals used to create the flavor are harmful to one’s health, particularly the o-vanillin. Just like cinnamon, the chemical is linked to cell death.

Some other vape flavors can also contain o-vanillin or other harmful chemicals, so it’s best to read labels and avoid any vaping companies that aren’t transparent with their ingredient list.

Sure, buttered popcorn may seem like a delicious snack, but the vape flavor has a ton of history- and not the best one!

The chemicals made to create the buttery flavors of popcorn are known to have caused irreversible lung disease in employees who manufactured the flavor, as they were breathing it every day in the factory.

The main culprit? A chemical known as diacetyl. We recommend that you stick to vegetable glycerin e-liquids, a healthier alternative compared to liquids that contain diacetyl.

There have been recent studies on tadpoles which show that fruit flavors might be toxic as well. Fruit and cream flavors cause tadpoles to develop cleft features, compared to tobacco and mint flavors that effect tadpoles less.

Tadpoles that have been exposed to almond, caramel, vanilla, strawberry, and other fruity and creamy flavors have developed clefts. So we recommend that you avoid both creamy and fruity flavors as much as possible, particularly if you are pregnant as this may affect your child.

Like mentioned above, the tadpole study shows that cream and fruity flavors can affect human embryos just as much as tadpoles. While the tadpoles developed cleft palates, there is still more studies to be done regarding the safety of vaping and how it affects humans.

So while cream and vanilla flavors are delicious with your cookies, it may not be best to use it when vaping. Avoid these flavors until more studies have been made about how it affects human embryos.

There have been studies on how vaping can also affect your heart health as well. Of all nine flavors tried and tested for the short-term effects on endothelial cells, it has been known that mint is one that can be dangerous and cause death to these cells.

Endothelial cells are the cells lining your blood vessels and in the heart. When smoking mint to the highest levels, it may prove to be detrimental to your heart health!

Last but not the least, complex flavors that contain multiple flavorings such as berries and cream or banana strawberry can be bad for your health as well! This is because you are inhaling more chemicals compared to just one single flavor. Research shows that mixing multiple chemicals to create a combination of flavors creates more cell destruction compared to single flavor e-liquids. So it’s best to avoid mystery flavors that might have a ton of chemicals in them!

While vaping may be beneficial for those trying to quit smoking tobacco, there are some flavors you need to avoid ensuring that you stay in good health. After all, some flavors still contain harmful chemicals that won’t help your body at all.

Hopefully, this article on flavors all vapors might want to avoid gave you an idea on how to choose the right flavors for your vaporizer. So don’t wait any longer and look into other delicious flavors to try today!

If you have any questions or want to share your tips and experiences with vaping, then comment below. Your thoughts are much appreciated!