Chi Kitchen is, without doubt, one of my favourite places to dine in Birmingham. So when  I received an invite to try the Chi Kitchen take on afternoon tea I was super intrigued. Chi Kitchen serves a glorious mixture of dishes that can be described as Pan- Asian, whereas afternoon tea is the most English of dishes. So how, exactly, would this work. The answer is that the twist on afternoon tea, served with that Pan Asian Twist, is exceedingly good. 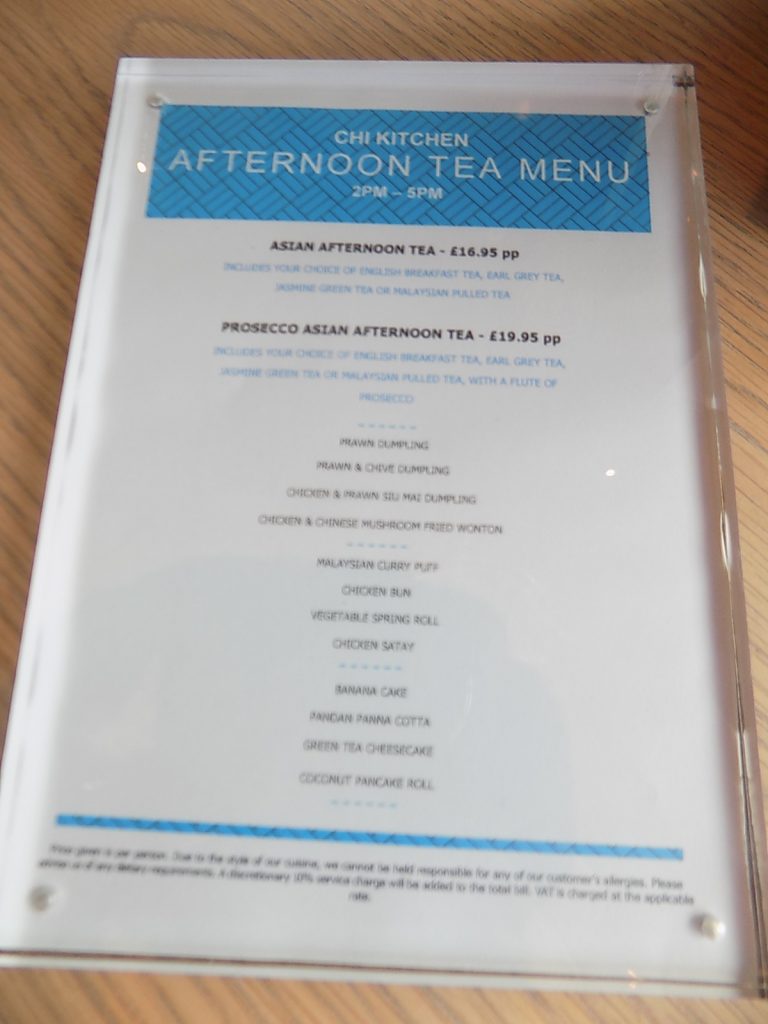 Afternoon tea is always best when there is an addition of Prosecco, and at Chi Kitchen, this was a deliciously crisp variety, with the addition of a cherry in the bottom of the glass. The afternoon tea itself is served very traditionally on the three tiered cake stand, but that is where tradition ends, with the top layer containing a selection of dumplings, the second tier consisting of savoury snacks and the bottom tier designed for those with a sweet tooth. 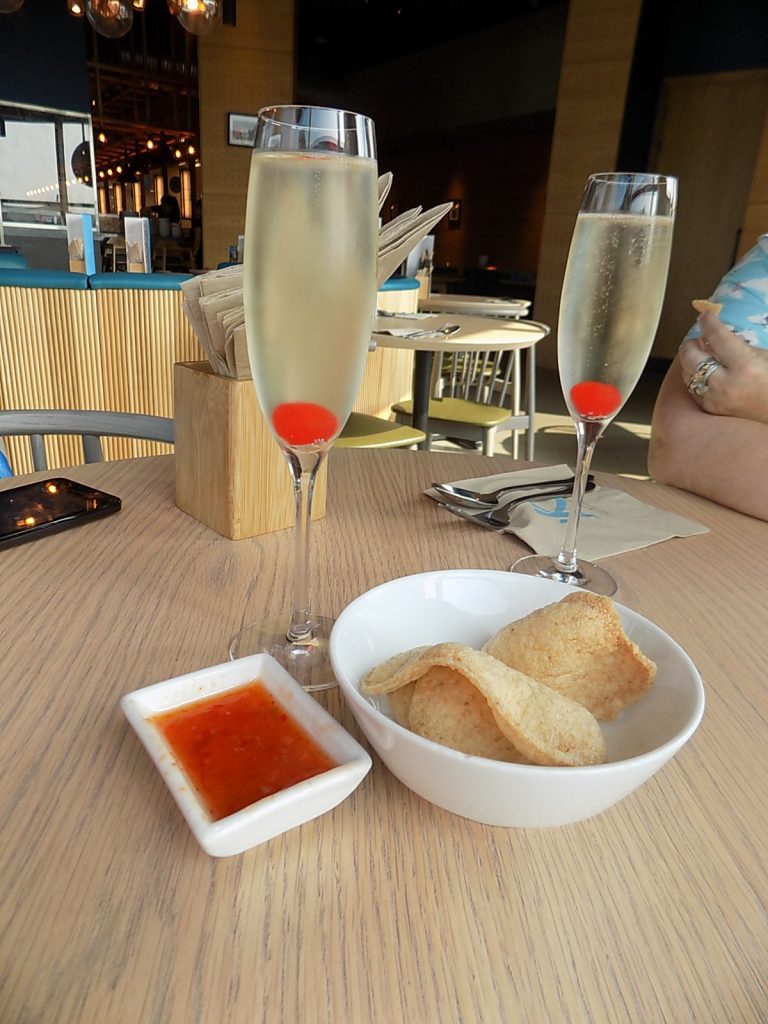 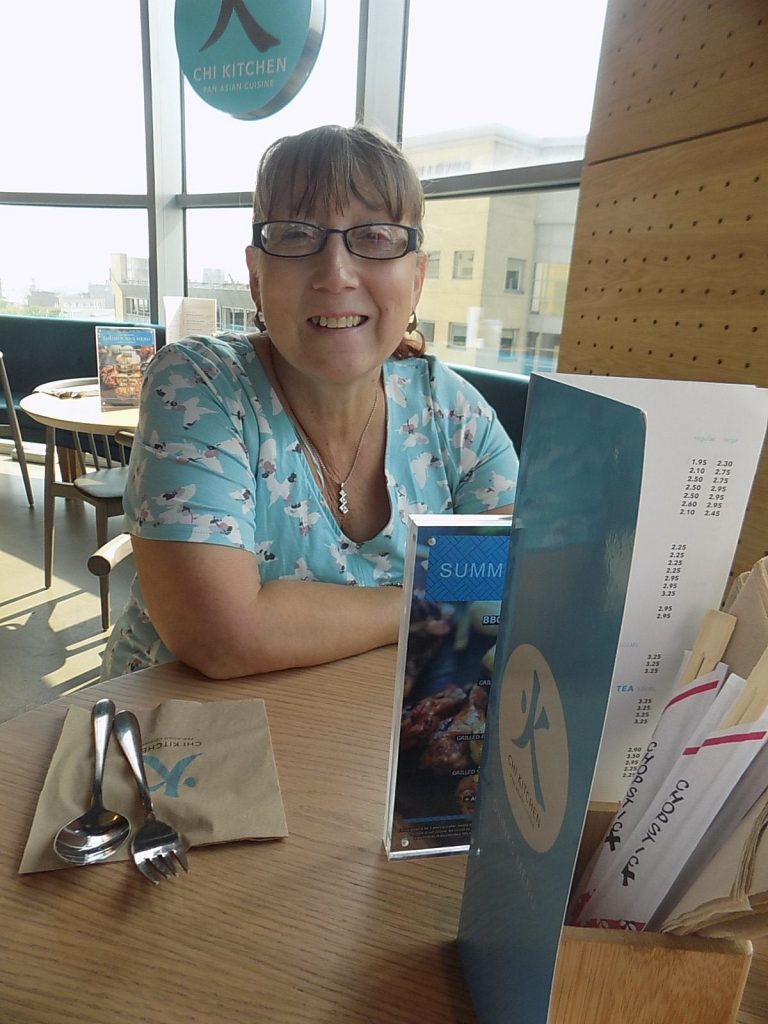 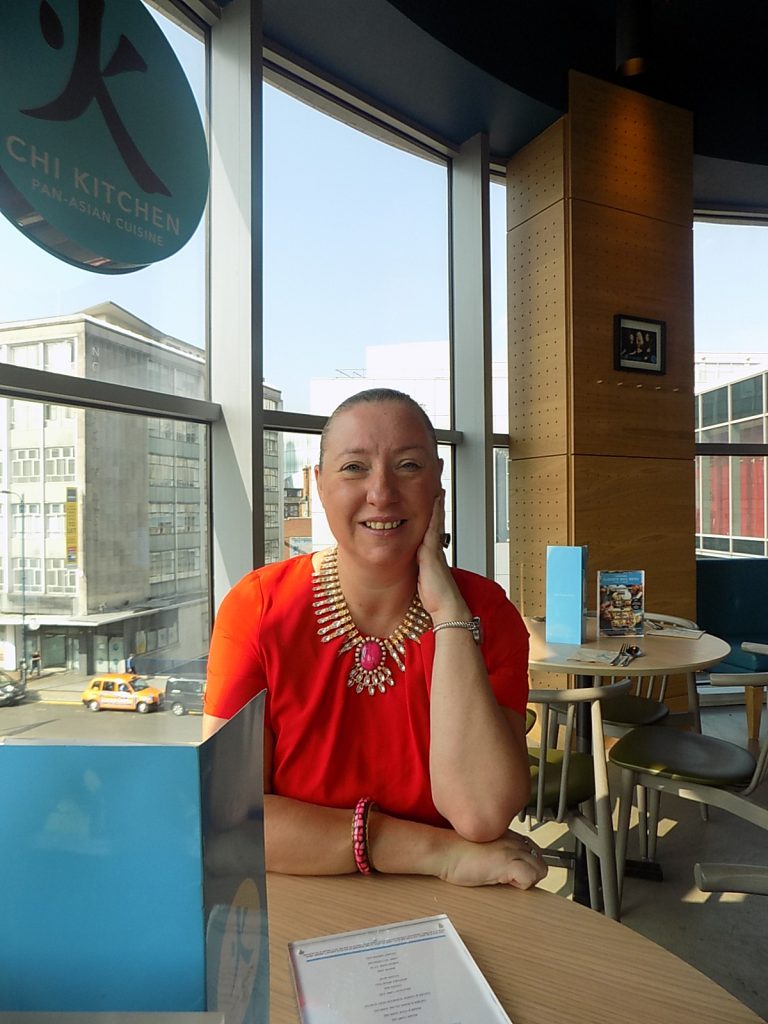 The dumplings were super delicious, in fact, despite the fact that I am well known for my sweet tooth, these were my favourite part of the tea. The dumpling were a mixture of chicken and prawns, as well as one which contained broccoli and chives, all were super tasty, nicely filled with plenty of filling, and the prawns in particular were large and juicy. There was also a crispy wanton that contained chicken and Chinese mushroom. I am not a fan of mushrooms, but loved the deep and crispy batter.

The second layer was full of savoury delights. The one which was voted favourite was the Curry puff, a slightly spiced and flavoursome take on a pasty. There was also a satay skewer which was covered in peanut sauce (another of my faves), a chicken bun which reminded me of chicken and stuffing, and a very moreish spring roll that was quite literally stuffed with filling. 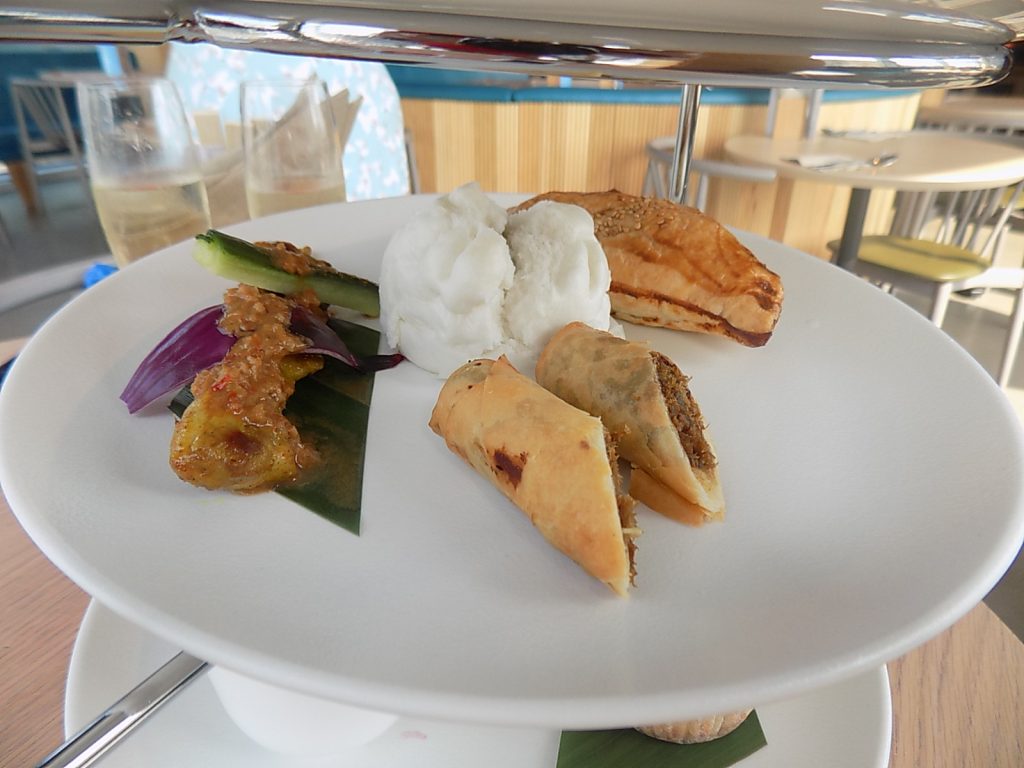 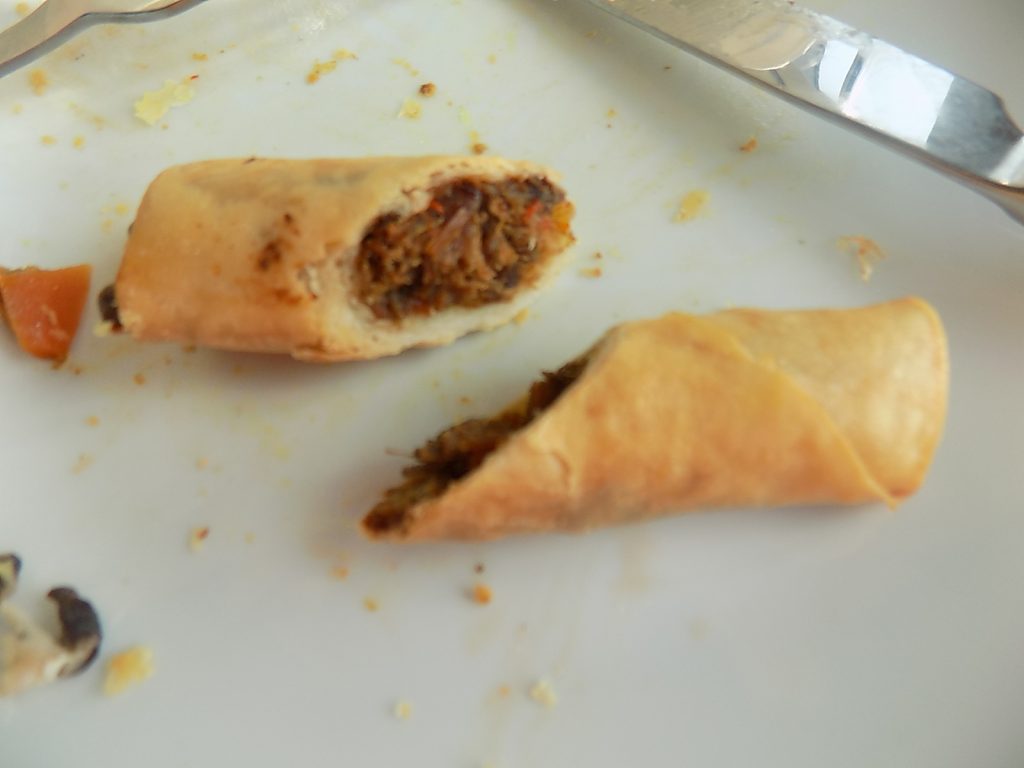 Of course, afternoon tea isn’t really afternoon tea without the sweet treats. The Pandan panna cotta was a delight, a super creamy confection that I can’t wait to try again. The banana cake was also delicious, with a custard style blob of banana cream on the top, and a lovely, moist fairy cake underneath. The green tea cheesecake was another revelation – if someone suggested it to me I wouldn’t be keen, but the tea flavour is very delicate, the sweet and creamy flavours are the ones that really come through. There was also a coconut spring roll which I didn’t get too, I’m not really a fan of coconut and I was, quite frankly full to the brim. 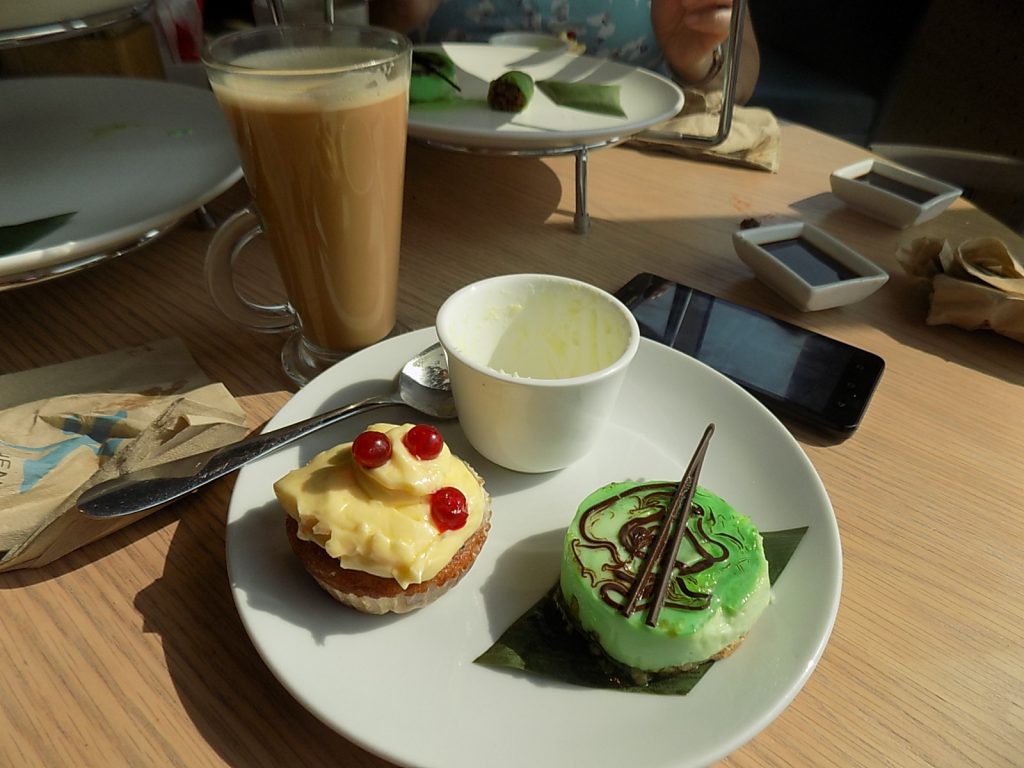 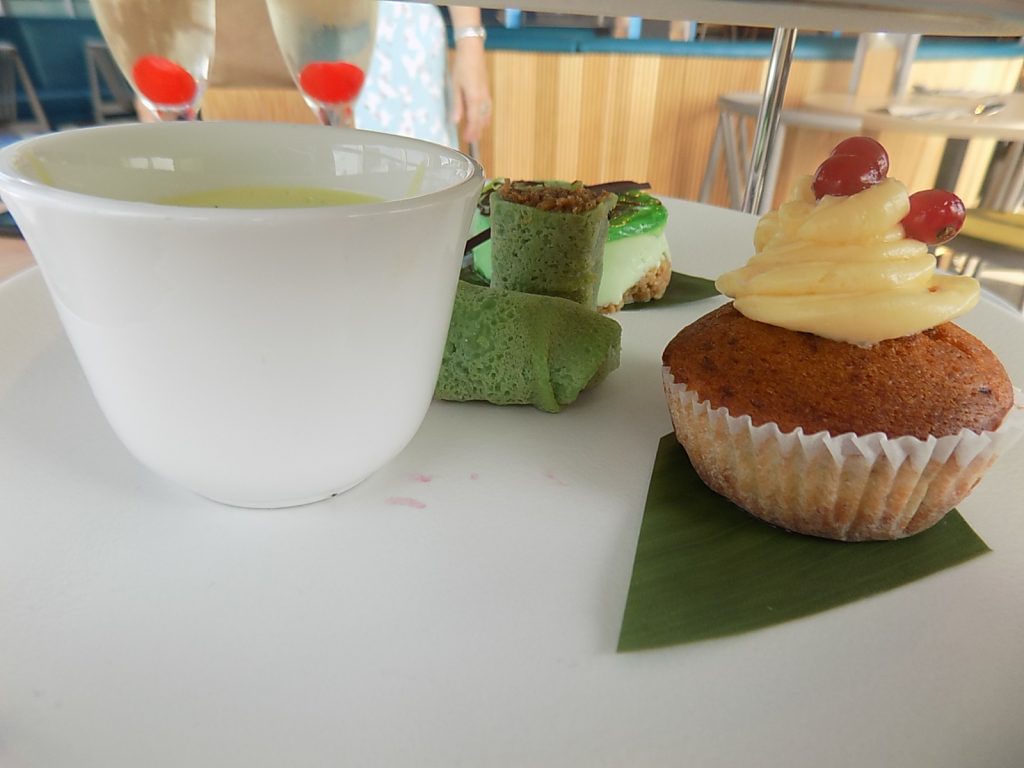 You can choose from tea or coffee to accompany your afternoon tea, I opted for Malaysian pulled tea, which is actually quite milky and not really for me (I like a builders brew so should’ve chosen English Breakfast).