Tucked away in the southeastern corner of Spain between Murcia and Valencia, Alicante is the capital of the Costa Blanca vacation region. Often overlooked in favor of more famous names like Barcelona, Madrid, Mallorca, and Malaga, Alicante is a gorgeous little city that is an excellent place to stay.

As the name suggests, the surrounding area is littered with beautiful white-sand beaches, while the city itself is a fantastic combination of culture, history, and relaxation. Right on the coast, there’s a delightful city beach, while the medieval fortress looming over the white houses and cobbled streets of the old town center hints at the region’s fascinating history.

If you are thinking about planning a Mediterranean cruise of a lifetime, Alicante would be a destination that is well worth considering. Here are some of the most interesting and exciting things to see and do in the city and around.

It is impossible to ignore the magnificent Santa Barbara castle thanks to its dramatic position that overshadows the entire city. Alicante was actually founded at the base of the original fort at some point in the 9th century and Santa Barbara has always played an important part in the city’s history. Take the lift or climb the sinuous path to the main entrance before exploring the fascinating interior, perfectly preserved, which takes you on a trip back in time through the history of Alicante. 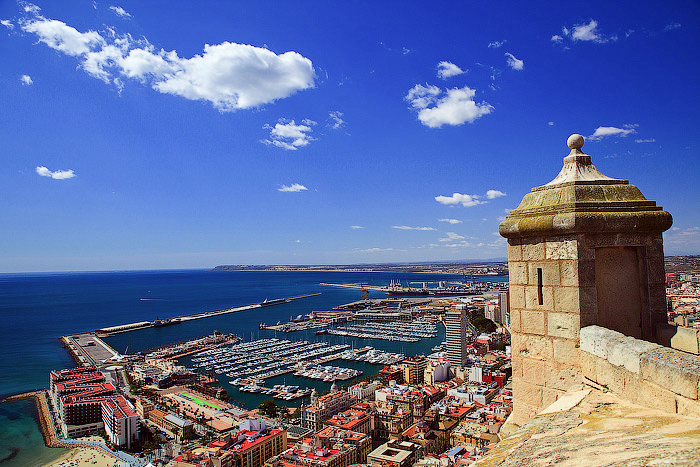 This gorgeous promenade is one of Alicante’s most beautiful features and is the center of the city’s life and vibrancy. Designed in 1867 by Jose Guardiola Pico, the pattern of the floor echos the movement of the Mediterranean alongside it and is perfectly complemented by the palm trees that line the avenue. This is the ultimate spot to indulge in the traditional Spanish evening stroll, and the market stalls, coffee shops, restaurants, and pintxo bars mean that there is something to do at every hour of the day or evening.

The heart of Alicante, the medieval old town is a fabulous warren of cobbled streets, whitewashed houses, and historic architecture. You can spend a delightful day getting lost in this charming district, and it is packed full of wonderful tapas restaurants and cocktail bars, so however far from the trail you stray you won’t be short of sustenance or refreshment.

There is a lot for history buffs to get their teeth into in Alicante, but the absolute must-see attraction is the Basilica de Santa Maria at the bottom of the mountain, just a stone’s throw from the beach. This is the oldest church in the city, and one of the most beautiful too, built on top of a former mosque following the Reconquista when the Moors were expelled from most of the Spanish mainland in the 13th century. There’s plenty to admire here, from the 13th-century tower to the incunable, a printed book from the 1200s.

Although technically an everyday public transport service, the Alicante tram should be considered a tourist attraction in its own right. The route runs right along the coast and offers stunning views of the Costa Blanca, from the winding coastal path to the charming towns and villages up in the hills. Head to the beach at San Juan, or be enchanted by the picturesque wonders of Altea, with its Moorish architecture and delightful coffee shops. Or just ride the tram there and back, the sea views and mountainous scenery really are worth it!

No trip to Alicante would be complete without a visit to the beach and luckily enough one of the best beaches on the Costa Blanca can be found right in the center of town! The Playa del Postiguet is a vast stretch of sand that runs the entire length of the city and out along the coast towards San Juan. The sea is clear and calm and it is the perfect spot to relax and soak up the sun. As one of the most beautiful beaches in the area it does get crowded in high season, so be sure to get there early to stake out your spot!

For a little untouched tranquility, you can escape the city to the lovely island of Tabarca, just off the Alicante coast. Ferry boats run throughout the day and a return trip is not expensive. The boat trip takes you through a Mediterranean Marine Reserve, so be sure to keep an eye out over the side of the boat, as the crystal-clear waters will show a wonderful underwater world of marine life and coral. The island itself is charming, full of ancient houses, a centuries-old church, and a wonderful hiking path that hugs the coast all the way around.