All or Nothing, the smash hit mod musical that tells the life and times of the wonderfully talented Steve Marriot and the Small Faces, arrived in Wolverhampton last night for a three night run. The story of The Small Faces, a bunch of Cockney teenagers who became one of the most biggest and most iconic bands of the 1960s, is a taundry tale of talented and youth exploited and ultimately wasted, but it also has laugh out loud moments, amazing music and a cast who are totally at the top of their game.

All or Nothing is written by Carol Harrison, perhaps best known for her role as Louise Raymond in Eastenders. She has produced an extraordinary piece of theatre, it probably is ‘the coolest musical ever’. Carol also plays the role of Kay Marriot, the mother of Steve Marriot, and a real heart of the story, a vibrant East End mother with a posh telephone voice and aspirations that her boy might one day work with Sir Laurence Olivier. Young Steve (Samuel Pope – all cheeky sass and attitude) has other ideas, his heart and soul lie in making music, and a chance meeting with Kenney Jones (Stefan Edwards) and Ronnie Lane (Stanton Wright) sets the wheels in motion for the band that will become the Small Faces. A change of personnel sees the tall Jimmy Winston(Joseph Peters) replaced by the pint sized Ian McLagan (Josh Maddison) and the classic Small Faces line up is complete and set for stardom. But fame does not bring fortune, as the band are exploited by a string of managers, and the charismatic but self destructive Marriot ruins their chances of world wide success with obnoxious behaviour that sees them banned from the likes of Top of the Pops. All or Nothing tells this story in blistering fashion, complete with a string of classic hits that are played live by a talented cast of actors who can also sing like a dream. 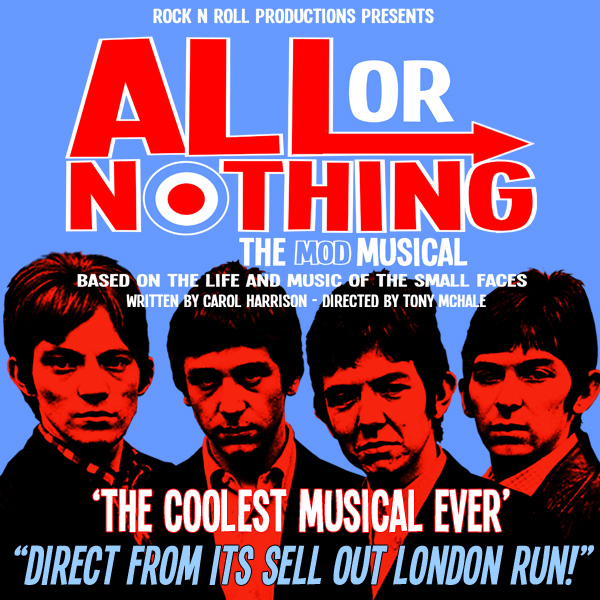 All or Nothing is one of the best musicals around, one with a real sad story to tell, and brilliant music that has stood the test of time.