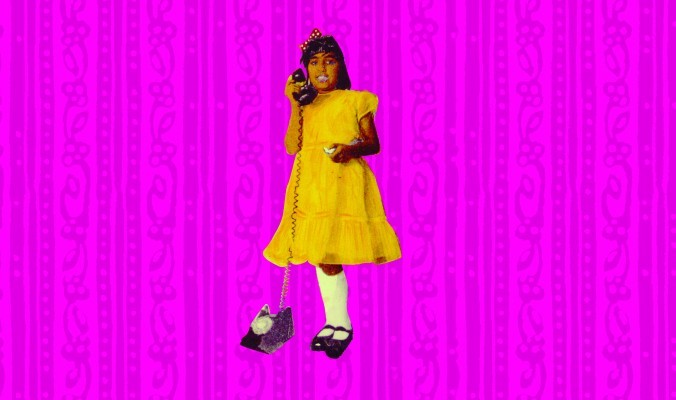 The stage version of  ‘Anita and Me’, Meera Syal’s fantastic novel based on her childhood growing up in Walsall in the 1970s, has its world premiere at the Birmingham Repertory Theatre this Friday. Ahead of the much anticipated show, I was lucky enough to have a chat with Kay Wilton, who is one of the costume makers and cutters at the Birmingham Rep, about how the costumes were sourced for a play that has both feet firmly planted in the 1970s.

Fashion-mommy: How did you go about sourcing the costumes for Anita and Me?

Kay: We had some original pieces in our stores in Hockley, original 70s stuff that are part of the Rep’s long history. We also looked in vintage shops and sourced stuff online. We have also been lucky that the 70s is having a bit of a fashion moment presently, which means there are 70s inspired pieces in stores like New Look and H&M.

There were a few very special pieces that had to be specially made, but most of the costumes could be quite easily sourced.

FM: Were there any costumes that gave you any problems?

KW: Obviously there are Asian characters in Anita and Me, and although I am knowledgeable about 70s fashion having lived through the period and worn it myself, I am not familiar with traditional Asian dress from this period. I consulted with some of the actors to make sure what we were using was correct – such as the Salwar Kameez. We didn’t want to be using modern Asian clothing for characters from the 1970s.

FM: Is there a particular costume that you are most proud of?

KW: Most of it has been sourced, but there is one dress that Meena wears which her mother has made for her – frilly, over the top. It’s not exactly proud though – more that it looks authentic.

FM: Were you familiar with the film and story?

KW: I had seen the film recently so was reasonably familiar with it, I also read the script, which does differ a little from the film and book. One thing our director was keen on was bright colours. There was an awful lot of brown in the 1970s, but our director wanted to avoid this cliche, this stereotype.

FM: You say you sourced a lot of the costumes, were you able to do this in Birmingham?

KW: Yes, we looked in a lot of the vintage shops, but not the obvious ones. The Rag Market was great for some things – flared jeans for example, and at the back of the market is a shop called Cash Converters Vintage where we were able to find lots of original pieces reasonably priced – things like day dresses and street wear. Vintage shops like Cow have amazing, high end pieces, but they would be wrong for this play. We needed daywear and casual clothes.

FM: Has Meera Syal had any imput into the costumes?

KW: She’s not had any direct imput into the costumes, but she did supply some original family photographs for the designers to help get the look just right.

With thanks to Kay Wilton for her time.

Anita and Me opens at the Birmingham Rep on Friday. For ticket information, click here.

4 thoughts on “Birmingham Rep wardrobe chat about Anita and Me”