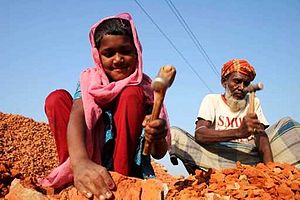 Fashion-Mommy has always considered herself to be a bit of a magpie. Since I was a young girl admiring my nan’s very heavy, charm laden bracelets, I have had a love of beautiful jewellery. But I have never really considered the origins of my much treasured pieces. Not once have I questioned whether my beautiful black and white diamond wedding ring was created from ethically sourced minerals. vulnerable workers, child labour , exploitation and appalling working conditions that include the use of toxic chemicals like cyanide and mercury and zero health and safety considerations were outside the remit of my safe and cosy world.

But today, I had my eyes opened widely. I was lucky enough to attend the Brilliantly Birmingham seminar looking at the world of Ethical Jewellery. The seminar/discussion was chaired by The Guardian’s ‘Life and style’ editor Kate Carter, an expert in ethical fashion, with a panel consisting of Fifi Bijoux’s Vivien Johnston, Sara Preisler, the Birmingham based jewellery designer and founder of the Sara Preisler gallery, Fair Trade and Human Rights campaigner Greg Valerio, the founder of Cred Jewellery, and Professor Jack Cunningham PhD, Head of Birmingham University‘s School of Jewellery. What followed was an interesting and tought provoking afternoon, with clear messages that the beautiful objects that are so precious to us, may be the cause of suffering, cruelty and a horrendous existence for others.

Fifi Bijoux’s Vivien Johnston opened the seminar. Fifi Bijoux has cleverly become  a leading ethical jewellery brand whilst still appealing to the High Fashion glossies like Vogue and Grazia. Regularly showing at London Fashion Week and appearing in Marie Claire, Fifi Bijoux is fully committed to sourcing jewels from socially and environmentally responsible mines. Vivien started her career in Jewellery working for a large commercial company, sourcing gems and gold. It was during this time that Vivien became aware of the horrors of the mining industry, the unfair working conditions, the use of child labour involving children as young as 6 years old, blood diamonds, and the use of chemicals like mercury which lead to the miners inhaling vapours and handling substances that have severe health implications. Vivien’s horror that our luxury items come from such horrific human rights abuses and environmental costs led to her determination to produce her own jewellery using ethically sourced gold and platinum, and gemstones that have not involved the use of child labour. Fifi Bijoux was formed in 2006 with the message ‘we believe it luxury as it should be; without the blood, sweat and tears…’ 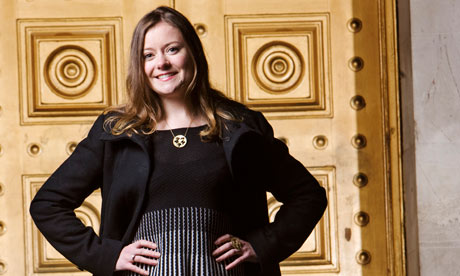 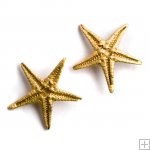 The pieces are beautiful, fashionable and ethical. My personal favourite is the beautiful ‘Radiate’ pendant, which is a stunning design piece. The starfish earrings are cute and fun, showing that ethical jewellery can be young, funky, fashionable and totally covetable.

Professor Jack Cunningham from The University of Birmingham almost played devils advocate during the discussion.  He discussed how gold has been a constantly recycled mineral since the time of the Aztecs, making it difficult to ever really know the complete provenance of the jewels we own. He cited the use of Brinks Mat bullion in the Birmingham Jewellery Quarter during the 1980’s as an example of this. I was struck by his comment that ‘the jewellery trade is the dirtiest business on the planet – but we know this when we enter it.’

The third speaker was Sara Preisler, a jewellery designer who is committed to doing her bit to make the industry a little less dirty. Based in Birmingham since 1993, and the founder of the Sara Preisler gallery which showcases a range of different designers from many genres, Sara concentrates on changing our perceptions of the beauty, and in particular, the concept of preciousness relating to sparking gemstones and ostentatious jewels. Sara believes that you can be responsible from where your materials come from if you are working on a small-scale and producing objects from scratch. Like Fifi Bijoux, Sara’s beautiful objects have attracted a starry clientele list, including The Royal Shakespeare company, Molton Brown and Selfridges.

Sara wants to help change our perceptions of beauty. She is not interested in large rocks and sparkle. She explained that thought and consideration can also be considered precious and says it is important that any piece of jewellery maintains a ‘hand made, considered identity throughout’. 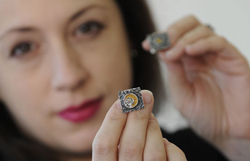 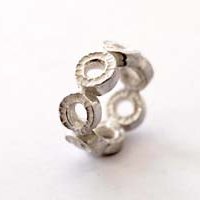 The final speaker was Greg Valerio.   A Fair trade and human rights campaigner, Greg was the introduced Green/gold wedding rings to the UK and was the founder of the Cred fine jewellery company. Greg has a hard-hitting message about jewellery production, believing that we are intentionally screening out the source of our jewellery products because the source is not beautiful. He continues that there is ‘nothing beautiful or romantic about cruelty.’ Greg has facts and figures to back this up. Small scale mining is the 2nd biggest employer in the world, employing 100 million people, but it is a poverty driven livelihood, with most gaining payment of less than $2 per day. Greg believes that we need to articulate a new way of being jewellers, with a commitment to safer working practices and community managed profits.

From February 14th, a day when traditionally a lot of jewels are presented as romantic gifts by our loved ones, ethically sourced gold will have a new hallmark. The fair trade and fair mined gold standard will follow a stringent set of rules that will provide clear traceability for your gold jewellery. This is a huge step forward in terms of the fair trade fight in the jewellery industry.

So, next time you admire a piece of gold, or some humongous diamond, ask yourself, what suffering went into creating something so beautiful. It may not appear quite so appealing if you actually take a minute to answer that question…