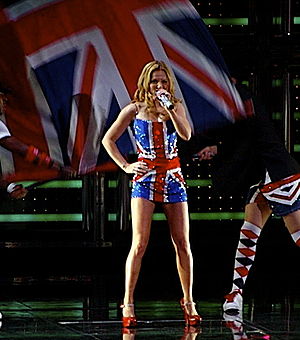 According to the October edition of Vogue, there is a 1990’s revival occurring in fashion. This made me shudder in disbelief, the 1990’s don’t seem to be far away enough in the past to be subject to a revival. Nor do they seem to be a distinctive enough style decade to warrant said revival. This got fashion-mommy thinking about her 90’s style, and the decade in general in order to try to answer the question ‘is it too early for a 90’s style revival, and if it is not, is it really worth reviving anyway?

My early 90’s style was dominated by Grunge. I loved The Wonderstuff, Soundgarden and Nirvana, and for a while this governed my look. The grunge look, in essence was easy. Dress as if style was a rude word, wear everything too big, and most important of all, abandon all bright colours. Grunge was morose and dreary, and so the clothes followed suit. I remember raiding my grandad’s wardrobe in order to pinch his plaid lumberjack shirts, and I was wearing a dark red one, over baggy jeans and a crop top, the night I met my future husband.  I also lived in Doc Martens purchased from Birmingham‘s famous Rag Market. Frankly I resembled Juno, and in hindsight, in the days when I did have a ‘perfect size 10’ figure, this was not the best look for me to have adopted. Heck, I should have been in lycra at all times, rather than covering up like a docker!

By the mid 1990’s I was out of my grunge stage. Britpop in all it’s glory had happened. Glamour was back. Blur, Oasis, Pulp and The Spice Girls dominated the charts. And I bought a Wonderbra! My already huge boobs were pushed up and pushed together to the point where it looked like I had two-thirds of ‘Right Said Fred’ under my top! I also coveted little black dresses with just a touch of lycra in them, and my River Island Union Jack bag. This was unusual as it was a blue/pink Union Jack, and I’m not embarrassed to say I still have this relic of the 1990’s under my bed somewhere. My hair was long, blonde and poker straight. Other girls had strange attempts at the ‘Rachel’ cut, but I played straight and safe. Not for me the two-tone hair of Geri Halliwell or Louise Wener, I was aiming for something more Dani Behr (whom Hubby loved!).

The late 1990’s saw minimalism at its peak, with Calvin Klein its key exponent. I tried this with polo neck jumpers (which made aforementioned boobs look like a shelf!) and pencil skirts, and black opaques, always opaques, which meant you could leave shaving your legs just a little bit longer. And now I bought a pashmina, and wondered how I had ever survived without it, and bought cheap versions in every colour in London and Birmingham from street vendors. A new style icon emerged, the inimitable Kate Moss, who looked great all the time, and hung out with cool people in Primrose Hill.

So, a brief summary of what the 1990’s meant to me. And, looking back, there were style moments to savour. The late Princess of Wales really hit her fashion stride in the mid 1990’s, wearing Chanel suits, Jackie Kennedy style pillar box hats and stunning Versace shift dresses. Vintage style arrived at the Oscars, and was embraced by Winona Ryder, Demi Moore and paved the way for one  of my favourite dress, Renee Zellweger in a gorgeous canary yellow strapless number by Jean Desses in 2001 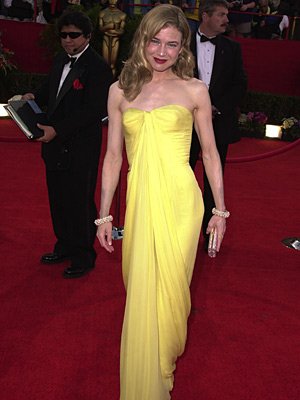 Then there were the Spice Girls. I loved the Spice Girls, but was a little too old to be a loud and proud girl power fan, so I was a secret Spice Girls fan. But I did love them. They were bright and bubbly, they were fun. I loved Geri strutting her stuff in a Union Jack teatowel which became an icon of ‘Cool Britannia‘. I loved their stupid shoes and Posh’s pout and point. I loved Scary in her leopard print, with her ‘so what’ attitude and her beautiful face. I loved Baby’s dimples and puppy fat, and Sporty’s backflips and real singing talent. I just loved them.

So there were things to savour. But do we really need a revival.  Well, I think not. You see, the 1990’s haven’t really left us anyway. They’re alive and well in 2010. Kate Moss is as iconic as ever, starring in ad campaigns for the super cool Isabel Marant. Naomi, Claudia and the other supers are still in demand, with Naomi’s sultry face all over a t-shirt by Dolce and Gabbana. Geri Halliwell is on the X Factor, whilst the Spice Girls are alive and kicking and now going under the name of ‘The Saturdays’. The top boy/man band is Take That – with Robbie Williams, just as it was in 1994. Doc Martens are having a moment, but never really went away, and now grace the feet of Emma Roberts, Alexa Chung and Agyness Deyn. Grunge has morphed into Emo style, but my sister still wear her Pearl Jam ‘ten’ top from 1991. And all is still well in the world of fashion…just as long as that curtains hair cut doesn’t make an unexpected comeback…