Well, it’s almost the end of London Fashion week, and it’s not been without its drama. We’ve had a moving memorial service to the ‘enfant terrible’ of British Fashion, Alexander McQueen. We’ve had lots of models taking a tumble, particularly at the Burberry Prorsum show. Star studded front rows, Anna Wintour, Carinne Roitfeld Reston from French Vogue, Olivia Palermo, Cat Deeley, Sarah Jessica Parker. Star models Daisy Lowe, Agyness Deynn, Kelly Brook and Abbey Clancy. And then there’s been the clothes, so many shows, so little time. So here’s my personal opinion of the good, bad and Mark Fast at London Fashion Week Spring/Summer 2011.

Christopher Kane. This featured mouth-watering sherbet shades and was completely wearable. Great dresses, pretty two piece suits with a 1960’s Doris Day/Pillow talk feel to it. This collection was supposedly inspired by a young Queen Elizabeth 2nd, a somewhat overlooked style icon who may be due a retrospective. I loved this collection. 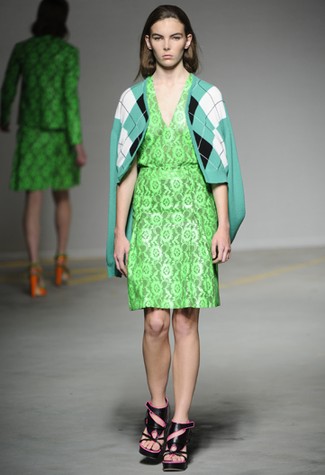 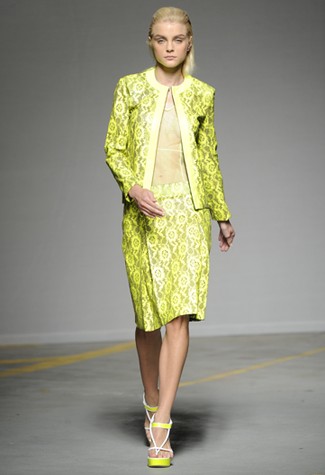 Clements Ribeiro. So good to have them back. There was lots of bright yellow in this collection. (My favourite shade on the catwalk.) There were floral prints in 70’s style and a great yellow cardigan which I am totally coveting. There was also a beautiful black dress that has to be one of my hero pieces of this fashion week – it’s so stunning in its covered ‘upness.’ My one dislike was the strange samurai hairstyle the models wore, but maybe it aloud this collection to speak for itself. 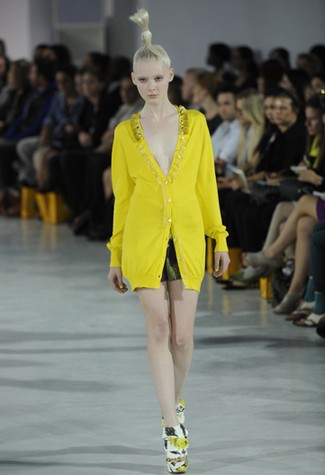 My favourite cardi – I so want this. 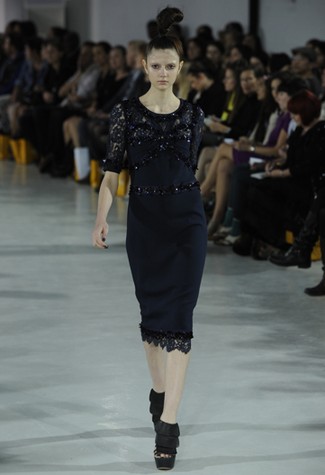 My hero piece from Clements Ribeiro.

Giles. To be fair,  I did quite enjoy some of the dresses in the Giles collection, and I was pleased to see curvy girls Kelly Brook and Abbey Clancy gracing the catwalk. But everything was overshadowed by the totally garish, melted clown make-up the girls were sporting. I was reminded of a crying Joan Collins covered in make up in a Badly Drawn Boy video and the image wasn’t pretty. Unfortunately, it overshadowed everything on the catwalk. 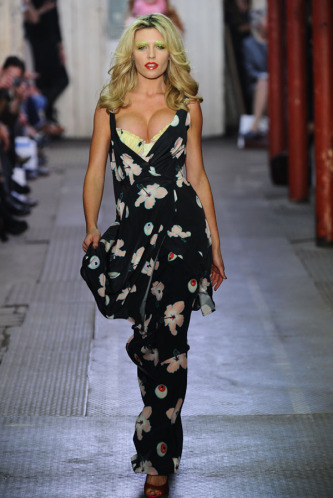 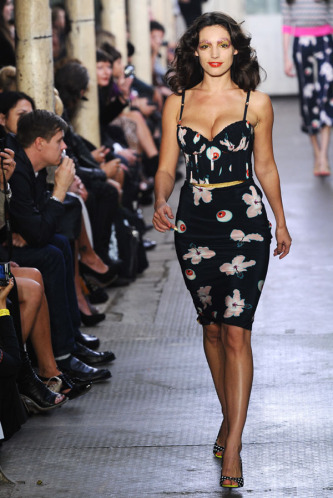 Burberry Prorsum. This is a strange collection. Everything looked shrunken. Tiny leather biker jackets that looked like they had been found in the childrenswear department at John Lewis. Short trench coats and the tiniest dresses and skirts. There was an emphasis on snake-skin and there was also two much Barbarella inspired silver fabric. It seemed aimed at the super slim, the leather leggings were totally unforgiving. A really disappointing collection. 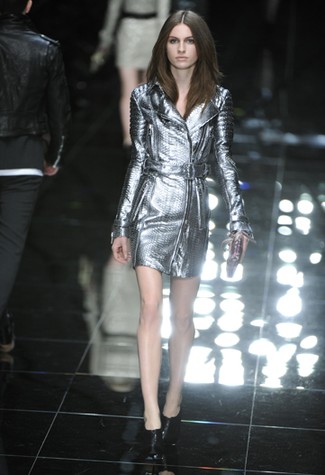 …AND…THEN THERE WAS MARK FAST…

The knitwear designer Mark Fast is no stranger to controversy. He lost a stylist after using curvy models in his Spring/Summer 2010 catwalk shows. But this collection was frankly indescribable. Many designs were barely there, with spiderman and cages seeming to be an influence. At its worst it bought to mind Scott Henshall, but there were some eye-catching designs. One white and silver catsuit evoked images of a 1960’s era Twiggy, and there were some cute, if daring dresses in the collection.  The designer also deserves plaudits for again using a mixture of curvy and slim models, although the slim were very slim indeed.

My favourite dress was a directional black dress with halter neck styling. I can imagine Cheryl Cole wearing this on the X Factor live shows. 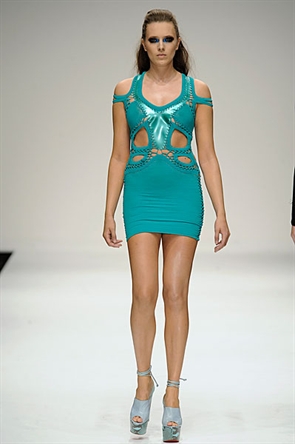 One of Mark Fast’s curvier models. 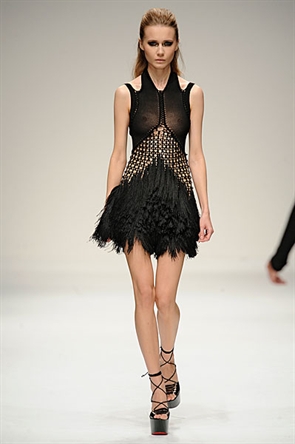