For lovers of the hilarious and anarchic ‘The Play that goes Wrong‘, there is a new, must see show in town. This time around, the Mischief Theatre group are not showing us a play within a play, but a real story in The Breakfast Club mode, following the five protagonists from their Year 2 class assembly, to their school reunion twenty years later. Funny, often hilariously so, Groan Ups also has a poignancy at times which surprises the audience. This is a comedy, but one with a lot to say about real life. 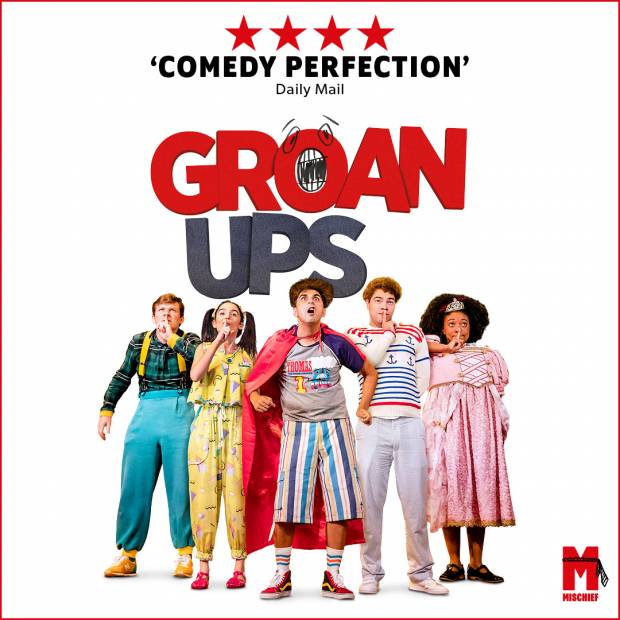 We start with that aforementioned Year 2 assembly, a wildly uproarious exploration of kids saying exactly what it in their heads when explaining what happened during their weekend. Our five heroes are introduced and we find out more about them as they are kept in at playtime for their hilarious ad-libbing. We have the Princess, Moon (Yolanda Ovide) totally ready to have an enormous tantrum if she doesn’t get her own way, the swot Katie (Lauren Samuels), who is both clever, pretty and popular too. Then there is the class clown Spencer (Dharmesh Patel) a loveable rogue with an unfortunate habit of squashing the class hamster, and newcomer, and reluctant jock Archie (Daniel Abbott), a football player who prefers drama. Rounding out the group is the class whipping boy, the slightly strange Simon (Matt Cavendish) desperate to be accepted by the group, but more often than not the butt of their jokes.

The action moves on to seeing the gang as teenagers in Year 9, where the dynamics of their relationships change as the hormones kick in. A potential relationship between two of the characters has life changing consequences as the play takes a decidedly darker turn. The final section of the play sees the characters twenty years on, at a school reunion where we see where life took them. This scene is much darker and more serious in tone than earlier scenes, although it does have the introduction of two new characters, Paul (Killian MacArdle) – why does no one remember him, and the scene stealing Chemise (Jamie Birkett). These characters lead to brilliantly funny moments as we move towards our conclusion. 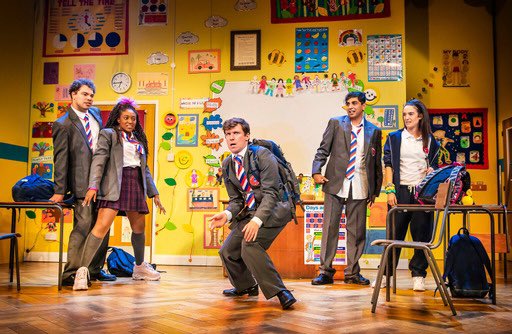 Groan Ups has so much to recommend it. It is clever in its portrayals of its characters at each stage of their life, and I can say that from experience of someone who taught Year 2 for three years, and it has real moments of comic genius, not least from the use of oversized and undersized furniture as part of the sets. Each character is a school stereotype, but the talented cast also make them feel real, and you like them all, even whilst often cringing with them. My only criticism would be that the third scene feels a little long, although often side splittingly funny (thanks Chemise!), it could be shorter and still retain all its value. This is a minor quibble though in what is fantastic entertainment.

Groan Ups is comedy gold that resonates with everyone who regards their school days with love or horror. Definitely worth a viewing.