Jodie Prenger proved, once again, what an amazing talent she is as she brought Willy Russell’s 1980s heroine Shirley Valentine to life at the New Alex Theatre last night in a one women tour de force.

Leaving a note on a post-it on the fridge, explaining that she had ‘gone to Greece, be back in two weeks’, Shirley Valentine has proved to be one of Willy Russell’s most enduring and beloved characters. Shirley is a bored surbuban housewife who feels that life, and all it has to offer, has passed her by at the age of 42. Her kids are grown up, and she has grown apart from her husband Joe. She dreams of a time when she might have some excitement, or at least something different in her life. A ticket for a two week holiday in Greece might just bring the excitement that she needs, but will she really be able to return to her mundane life once she has had a taste of something different?

This is Shirley’s story told in a series of monologues, first in her kitchen where she is tied to the cooker and the kitchen sink and talks to the wall, and then from the beach of her Greek island escape. Jodie Prenger brings Shirley vividly and brilliantly to life as she tells those stories. She commands the stage with her sheer presence and force of personality, by turns hilarious, and by others poignant, and with a faultless Scouse accent. Prenger makes Shirley so real, funny, sympathetic and brave. As she tells those stories of Bryan and Malandra, and her husband Joe, you really root for her to go out and enjoy herself. 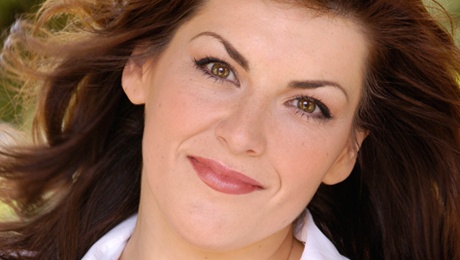 Even though Shirley Valentine is now over 30 years old, it still resonates – there are still plenty of Shirley’s out there, and that is why the ending is so heartwarming. You don’t really know what Shirley’s next step will be, but we do know that the downtrodden housewife has disappeared for good, and that is a brilliant thing.