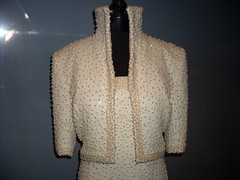 On Thursday I went to the V&A to see the Grace Kelly exhibition. After spending an hour admiring Grace’s style, we exited to the main costume exhibition. One dress made us all gasp. For there, in all its glory, was the Princess Diana ‘Elvis‘ dress, the stunning off white gem encrusted strapless dress, with short sleeved jacket with the upturned collar. This was the dress that the Franklin Mint had donated to the museum in 2005/6, the dress that had raised the most money when Diana had held her famous dress Auction.  The dress was instantly recogniseable to all, one of Diana’s most famous, most successful looks. And yet its designer was not a name instantly recognisable to all. Her name was Catherine Walker, and she has died at the age of 65 after a long battle with cancer.

The young Princess Diana wore a whole range of designers whilst trying to find her signature look. Belville Sassoon, Jasper Conran, Zandra Rhodes and Bruce Oldfield were amongst the designers whose clothes were worn by the willowy Princess. But it was the French-born Catherine Walker who became her favourite designer. Many of her most famous looks were created by the designer, including the salmon pink and jewel encrusted dress and bolero worn in official royal photographs taken by Lord Lichfield and worn on the official visit to India in 1992.  Walker also designed many of the day suits that the Princess wore on official engagements.

Catherine Walker was a designer who remained a Diana favourite until the end of her life. Although the Princess frequented a range of designers from overseas after her divorce from Prince Charles, including Versace and Chanel, she remained faithful to Walker, wearing a short halter neck jewel encrusted gown to the Serpentine Gallery in 1995.  The Princess was buried in a black Catherine Walker dress. 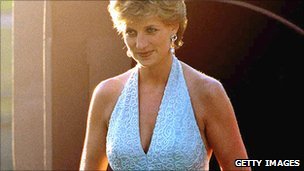 Catherine Walker experienced heartache in her life. She was left a young widow with two small children in 1975, and she fought cancer twice. She was a private person who shunned publicity and the public, whilst being awarded two British design awards for couture and glamour in the early 1990’s. She designed for other royal family members, most notably the wedding dress for Lady Helen Taylor.

In a statement, her family said: “Catherine Walker overcame young widowhood and fought cancer twice with enduring bravery. “She built one of the most successful British couture brands and at the same time raised a loving family. Catherine Walker has dressed many of the world’s most beautiful women.”

Catherine Walker’s legacy are her beautiful dresses as worn by her greatest, most famous muse, The Princess of Wales. In numerous photographic images, Catherine’s amazing sense of style and eye for detail is there for all to see and admire. RIP Catherine Walker.