Some women deserve the term ‘Domestic Goddess.’ They swan around the kitchen in best Nigella mode, making the most mouthwatering creations from scratch, baking their own bread and cakes, seemingly able to rustle up a three course meal from a block of cheese and a bag of potatoes. Sad to say, I am not one of those women.

In fact, I couldn’t be further removed from the term ‘Domestic Goddess’, ‘Domestic embarrassment would be more apt. You see, I really hate cooking, I hate it with a passion. So whilst some lovely ladies litter their blogs with culinary delights, I clog up my Facebook feed with ‘OMG!’ moments from the kitchen. However, my five year old loves to bake, cook and generally mess about in the kitchen so I do sometimes have a go …with varied results. 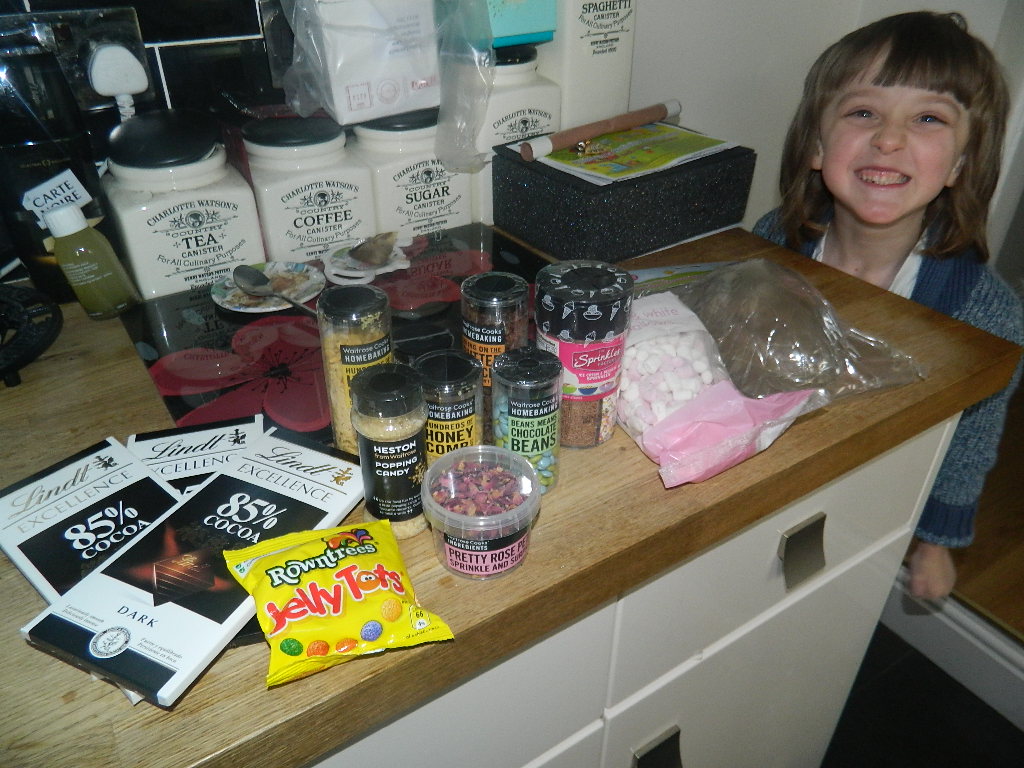 When I was approached by the lovely people at Waitrose to see if I would be interested in making my own Easter Eggs with Joe, my first response was to laugh out loud. Me. making my own Easter Eggs – were they joking? But, after having a think about it, I decided it would be a lovely activity for the first day of half term, and, as it only really involved melting chocolate – what could possibly go wrong? These were to prove famous last words. 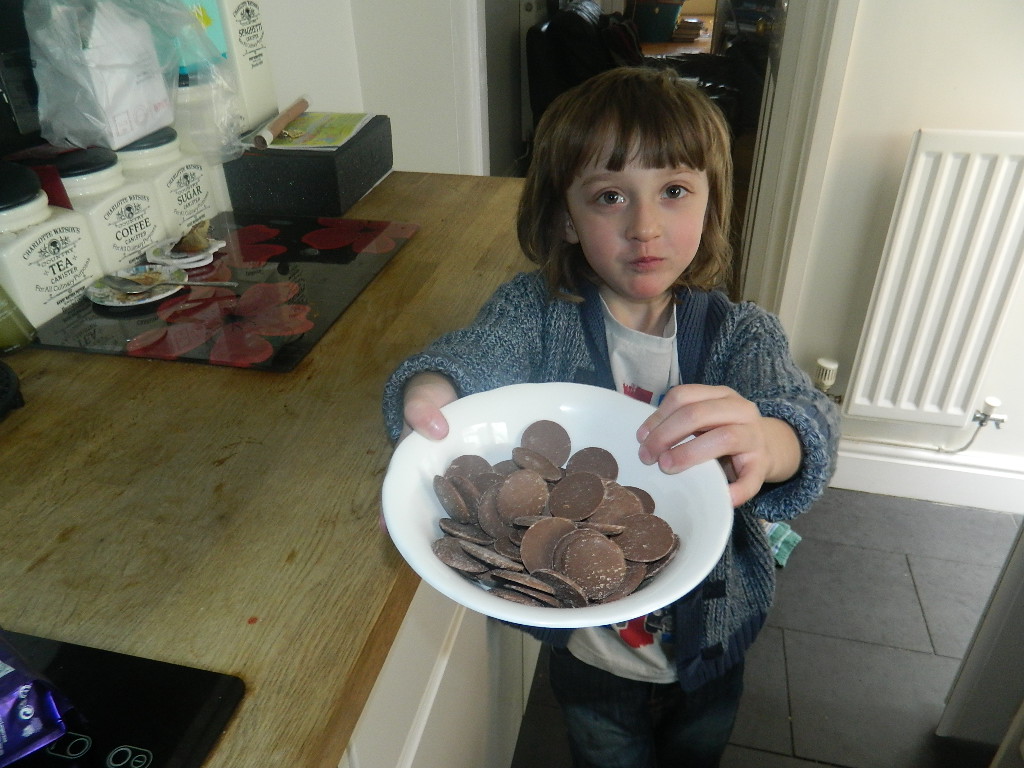 We were sent a truly amazing box of ingredients, both to make, and decorate the eggs. Everything from chocolate sprinkles (also perfect for ice cream), honeycomb and butterscotch pieces, mini marshmallows, pre-made icing, popping candy, the sweet treats were literally endless and totally mouthwatering. There was also a mixture of chocolate – Lindt dark chocolate, and dairy milk chocolate in the form of large buttons. Everything we needed to create the perfect Easter Eggs. 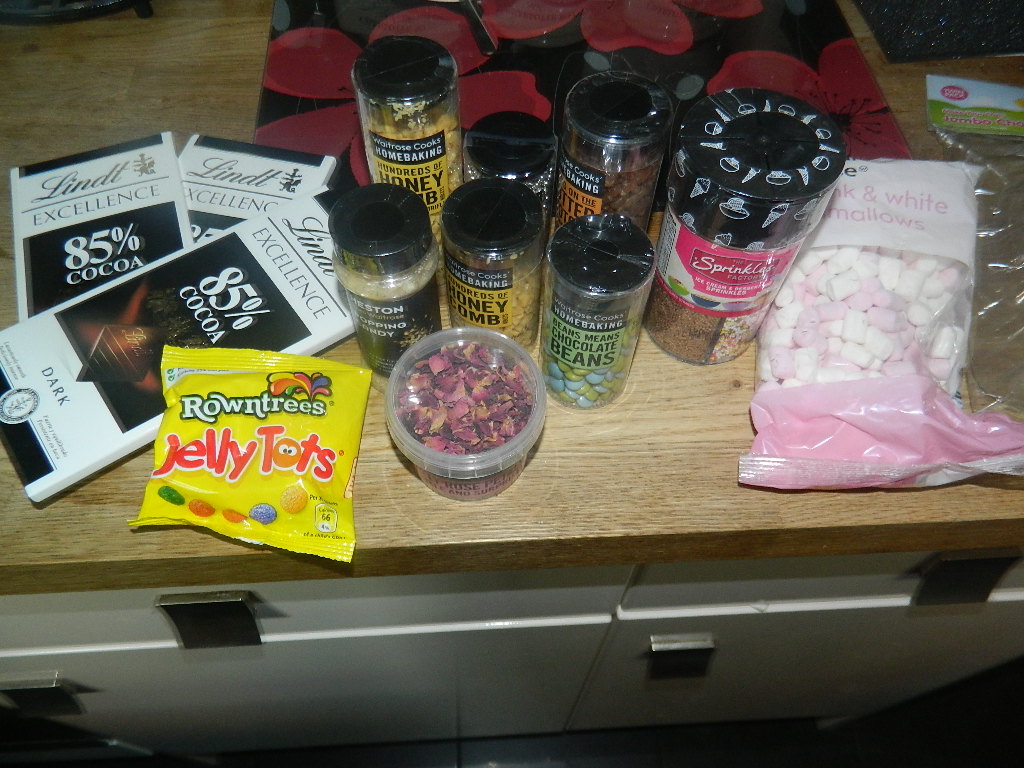 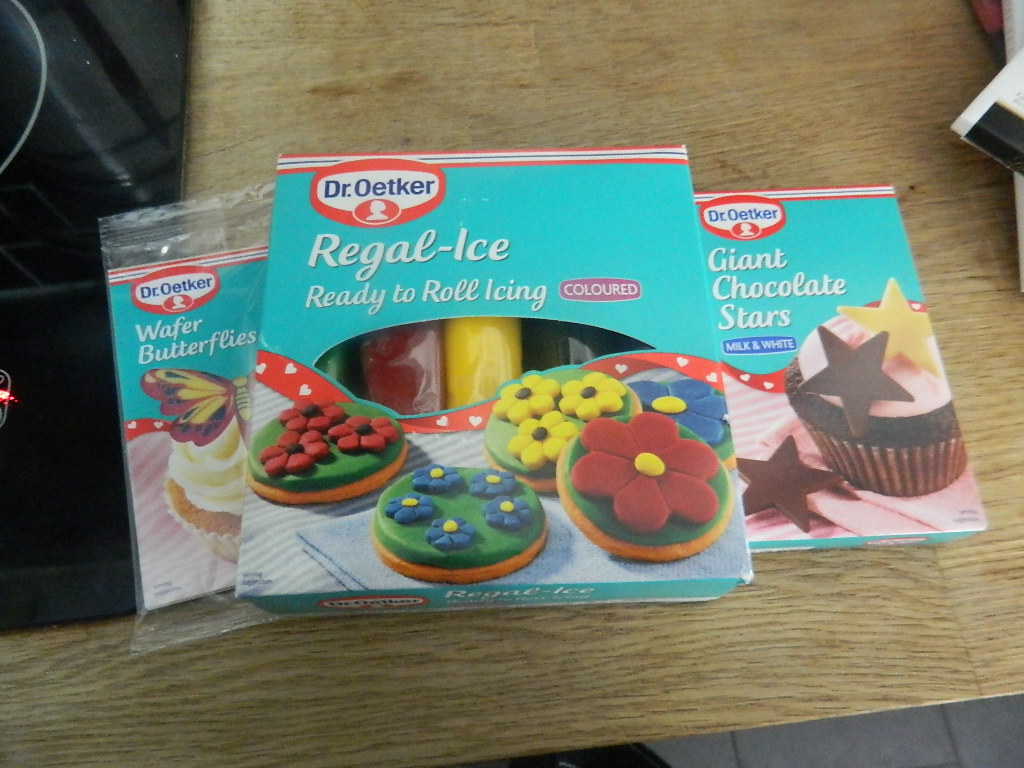 We started quite well. We melted the chocolate and got the molds ready. We found old, clean paintbrushes as I don’t possess a pastry brush (what exactly is a pastry brush?) and got down to putting a thin layer of the melted chocolate in the mold. So far, so good (save except for a few stray bristles from the paintbrushes – but what’s a bristle or two between friends?) We allowed the first layer to harden, and then added a second layer. Again we allowed this to go hard. We were now all set to decorate…or so we thought. 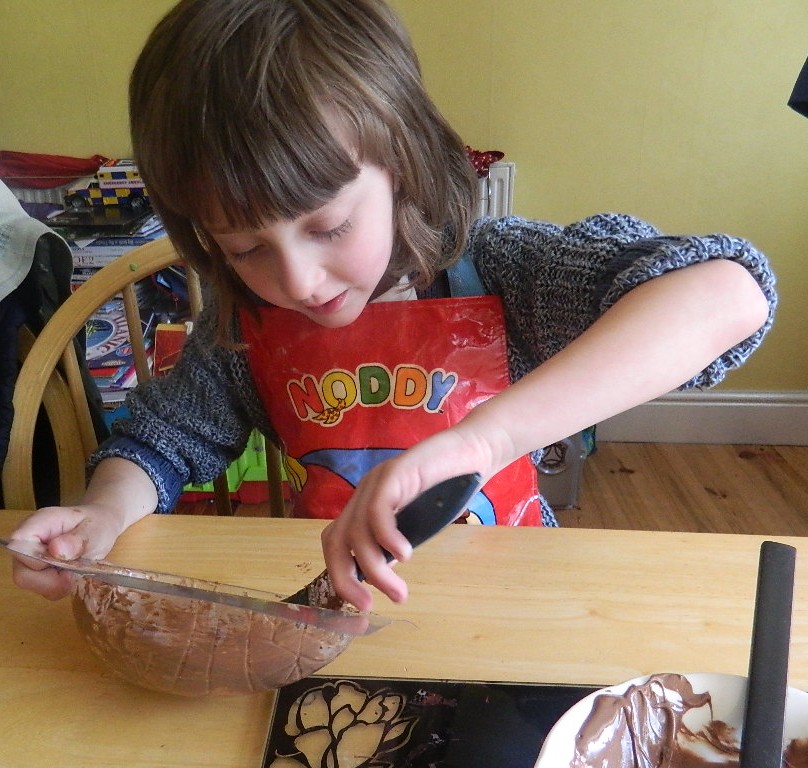 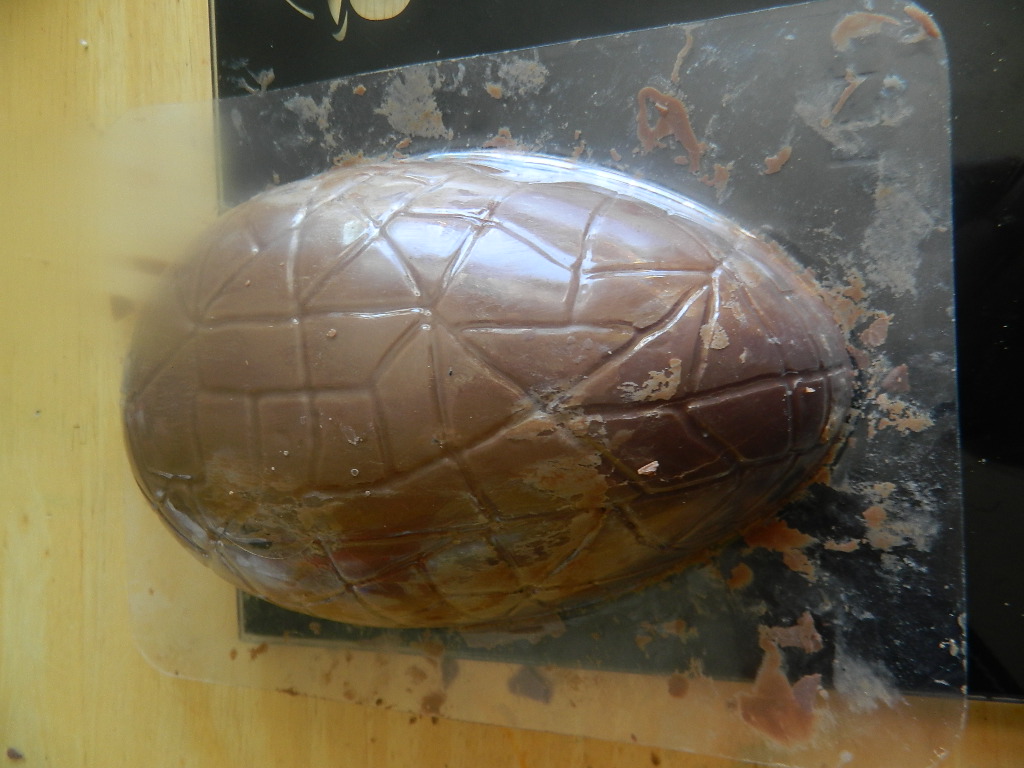 The problem came when we tried to get the eggs out of the molds. They wouldn’t come out. Joe suggested banging them on the table – I did, and that didn’t work either. I then tried to loosen them by squeezing the edge of the mold, and this, eventually, started to release the egg – in shell-like pieces unfortunately.

We eventually ended up with this. 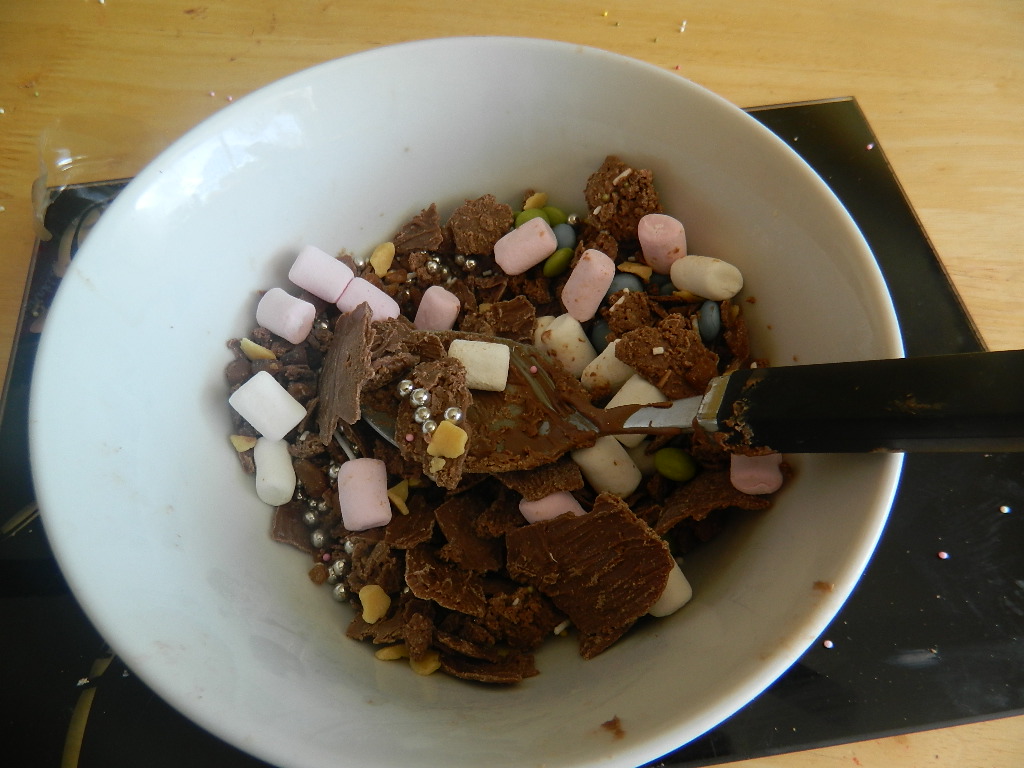 The amazing thing is that Joe was as happy as could be and set about adding all the honeycomb pieces, sprinkles and smarties to the mix, he stirred, tasted and proclaimed that he wanted to save some for his nan. And I guess that is the crux of this task, the sheer enjoyment factor. You can buy an Easter Egg anywhere for a pound, but the giggles and fun we had was both memorable and totally priceless. 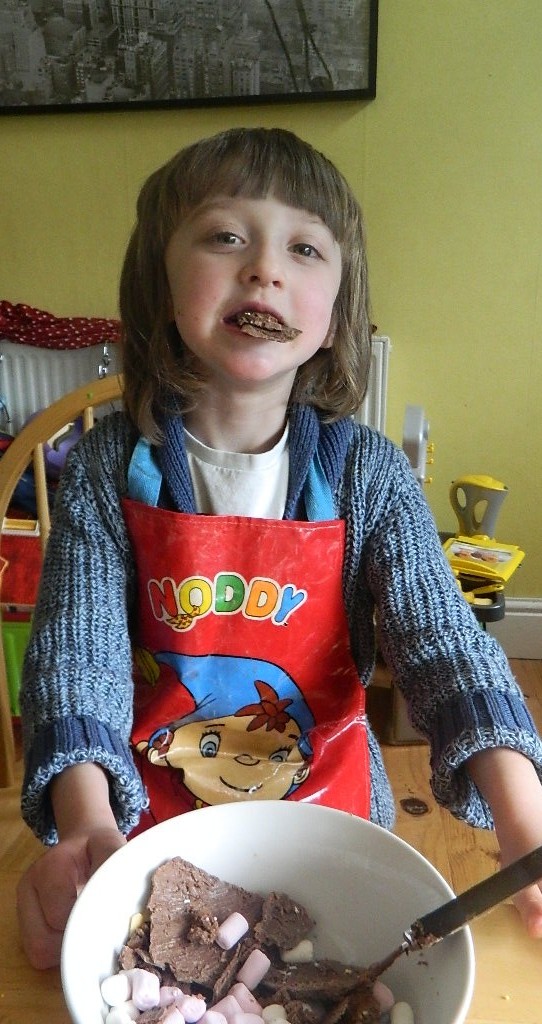 With thanks to Waitrose and Simone Stevens from Propellernet.

Spring is a wonderful time of year for fashion but for busy parents it also means Easter, and that means the school holidays. And that means two or three weeks of finding activities to keep the children entertained and happy – which is never an easy task.

It’s usually okay if the weather’s decent; play in the garden, go to the park, stroll around a farm, that kind of thing. But as everyone knows, the UK weather is rarely predictable and April can be especially wet and miserable. With that in mind, it’s always advisable to have a few ideas for indoor fun.

Arts and crafts are perfect to occupy little minds. If you’re not particularly craft-minded, don’t worry: this brilliant Easter Holiday Boredom Conqueror guide is full of projects to enjoy. Easter egg characters in cups, decorating Easter bonnets, face painting, making an Easter chick – all of these are great fun and pretty simple to do.

Don’t feel these are just for young children only, either. Older kids and teenagers may enjoy creating batik eggs, achieved by melting wax in bain-marie sachets and then using that to draw patterns onto the surface, before dipping it into cold water dye for a stunning effect. These make cool decorations for the home or, alternatively, unique and memorable presents.