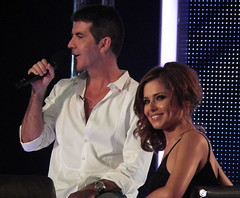 There seems to be an amazingly vicious style backlash against Cheryl Cole at present. This week tacky designer Julian MacDonald waded into the row by criticising her clothing choices on the X Factor this series, Cheryl reportedly ran off in tears after the tirade. OnLine fashion sites have also been vitriolic in their abuse, reporting on the return of the hair extensions, the red colour, the orange looking tan and the ice skater style short skirts in detrimental terms.

It is all so different from when Cheryl first emerged as an X factor judge. Cheryl was praised for her warmth and beauty and her style, wearing outfits from Preen and Atelier Versace and shoes from Brian Atwood. Her every outfit was copied in a multitude of ‘steal her style’ articles in almost every fashion magazine. A L’oreal contract and a Vogue cover soon followed, along with a number one single and album. But then the backlash began.

Danni Minogue, her fellow female judge on X Factor, quietly began to steal her fashion thunder by wearing outfits from labels like  J’Aton Couture and a never-ending stream of changing hairstyles. She looked edgy and fashion forward. Cheryl, in comparison, struggled when she wore a dress from up-coming designer David Koma, with the dress being referred to as the hubcap dress, and ridiculed by the press. Her long locks began to seem tame in comparison to Danni’s quiffs, bobs and pony tails, but it was rumoured that her L’oreal contract forbade hair style changes.

This season of the X Factor has seen Cheryl’s style influence seem to reach an all time low. Danni Minogue has worn a steady stream of amazing looking outfits, from Gucci, her own range Project D dresses, and most spectacularly, dresses designed by Cheryl’s former friend, Victoria Beckham. Victoria has tweeted about how wonderful Danni looks in her designs, and this has been a major coup for Danni.

Cheryl, on the other hand, faced insults from Simon Cowell himself for looking orange in the first live show. Her endless stream of short, skater style skirts have seen her face the accusation of looking like a Chav, whilst a recent hairstyle was likened to Minnie Mouse ears. When she unveiled her Madame Tussaud’s dummy in yet another short skirt, she showed off more tattoo art on the top of her thigh, which also led to sneers about Cheryl’s chaviness. Louis Walsh waded into the row by saying that Danni Minogue was definitely winning the style battle on this years X Factor.

So why such a backlash now? Maybe part of it is down to the ‘tall poppies’ syndrome. The British do have a peculiar habit of raising people up just to cut them down. Cheryl was feted when she first joined X Factor, whilst Danni Minogue faced the critics insults for being older and less pretty. Now fashionistas and designers have decided champion Danni the underdog, so Cheryl must now face the more hostile press.

But is this unfair?  Cheryl, in the cause of fashion experimentation, is bound to make mistakes. Some of the designs she has worn recently haven’t been the most flattering, however, it is equally true to say that someone has beautiful as Cheryl would look good dressed in a sack! Which then makes me wonder if other issues, such as Gamu-gate, the non-voting fiasco with TreyC and Katie Waissel, and now the Wagner issue are the actual reason for such vicious taunting. If you want to really upset a women, the best way is to criticise her appearance, and this is what the press, fashion critics and almost everyone else is doing at the moment. It is also worth noting that Cheryl was recently judged to the best dressed women by Now magazine, and was voted Glamour best dressed women for the 2nd year running earlier in 2010. When she wore Wolford’s bondage style tights in performing ‘Promise this’ on the X Factor, the tights quickly sold out.

It remains to be seen if Cheryl will turn the tide and again be the nation’s sweetheart. With Rebecca Ferguson. she again has an act capable of winning the X Factor, her most recent single ‘Promise this’ entered the charts at number one, as did her album ‘Messy little raindrops’, so the nation hasn’t completely fallen out of love with the Geordie sweetheart just yet!