British Comedy has a long tradition of slapstick and farce. From Jeeves and Wooster, to Monty Python, from Benny Hill to The Young Ones, British Comedy always has the ability to send itself up, to be slightly anarchic and to understand that, no matter what goes wrong, the show must go on. That tradition is now in the safe hands of Mischief Theatre and their comic creation, The Cornley Polytechnic Drama Society, in the side splittingly funny ‘The Play that goes wrong’ which had its press night at the Wolverhampton Grand last night. 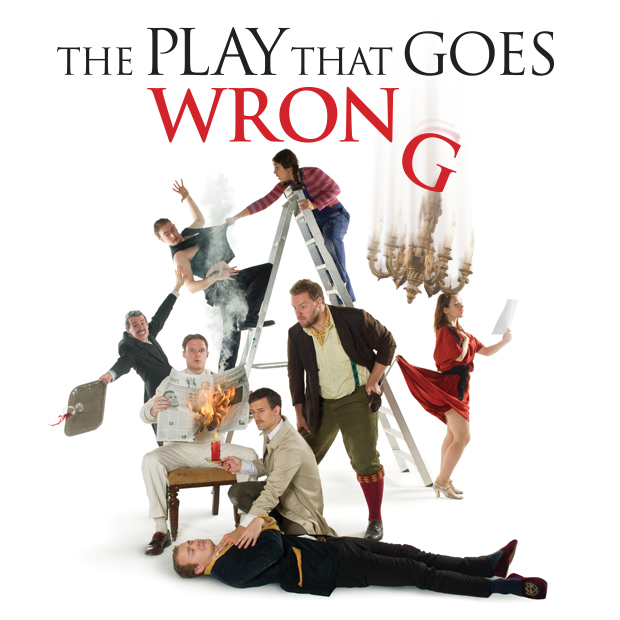 ‘The Play that goes wrong’ is exactly what it says on the label. The Cornley Polytechnic Drama Society are staging ‘The Murder at Haversham Manor’. For once they have a cast that is large enough to actually stage a full version (unlike the time they had to stage an abridged version of Cats called ‘Cat) and Director Chris Bean(Patrick Warner) is very excited, especially as he has a rather large and juicy role as Inspector Carter. Despite the fact that the set is still being created as the audience arrive, and there seems to be a dog missing, the stage is set for a wonderful show. But whatever can go wrong does go wrong, from sets that collapse, actors forgetting their lines, props that disappear, lines being said in the wrong places, doors that won’t open, shelves that have not been erected, swords that break…I could go on and on. Add in the character of Florence Colleymore being played by a series of different characters due to a series of unfortunate injuries, and the funniest ‘dead body leaving a stage’ scene you have ever seen, and you have a play that does go wrong, but in the most glorious, hilarious style.

The ensemble cast are all uniformly excellent, masters of physical, visual comedy who can raise belly laughs from a gesture, a look, a walk or, in the case Alastair Kirton, (as Max playing Cecil) the way he milks any acknowledgement from the audience with wide eyed wonder. Edward Howells is also supremely funny as Dennis playing Perkins, struggling to remember his lines and how to pronounce key words properly (particularly facade and cyanide). Jason Callender who is supposed to be dead for the majority of the play, is also super funny, trying to play dead as people step on his hands, put him onto a broken stretcher and use his as a sofa. If it all sounds crazy, that’s because it is, at times there are so many funny things happening at the same time it is hard to know just where to look, especially when the backstage staff become part of the onstage action.

‘The Play that goes wrong’ is so, so right on every level, hilarious in a way that only British comedy can be. It is an absolute joy, and you will laugh until your sides hurt and the tears roll down your face…and then you will laugh some more.

THE PLAY THAT GOES WRONG