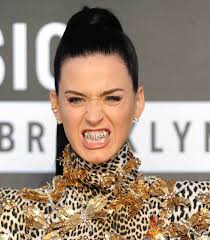 Grills or Grillz, also known as fronts or golds originated in the Hip-hop Culture.  It is a type of jewelry worn in front of the teeth, usually made of precious metal accompanied with precious stones and is generally detachable. They are the perfect way to show off your wealth by just literally smiling. Grills started way back in the early 1980’s when New York rappers started wearing them. And now even though the grills bandwagon has not reached its peak, it is slowly rising into mainstream fashion. You can find many celebrities today buying gold teeth grills. Some out of curiosity and others follow their ghetto gospel religiously. Here are some famous celebrities that buy and wear gold teeth grills.

One of America’s sweethearts, Katy Perry is a successful singer that has topped the music charts for so long that she has finally reached the stage of joining the Grills brigade. In 2013, she walked the red carpet at the MTV Music Awards sporting a diamond encrusted grill which reads ROAR. An ideal way to exhibit her popular song ROAR and at the same time show a new fashion statement.

This rapper, singer, and songwriter has been an avid Grills supporter since he hit the spotlight. He even made a song about the dental grills to prove his love for the trend. Nelly is well known for wearing grills and even matching them with his chains. From gold grills to personalized diamond encrusted grills he has it all. Being buddies with Paul Wall, a jewelry designer that makes custom grills, people don’t have to wonder where he buy gold teeth grillz.

Being married to a Hip Hop Mogul will have a major influence in your lifestyle and fashion. That’s what Beyonce learned when she married Jay-Z. She also joined the Fashion Grills Club recently thanks to the influence of her hubby. Not everyone can rock those grills even if you try hard. But she has been spotted wearing simple Gold Grills design and even posting some pictures on her social media rocking her custom grills. This soul singer proves that she can also have that expensive smile without being arrested by the fashion police.

This rapper and songwriter that made Autotune famous is also a famous Grills lover. He is a big spender when it comes to buying grills. One of his fronts is reported to be a staggering worth of $30,000. It is made out of gold with fancy yellow diamonds. He is one of the most iconic Grills Advocate’s in the hip hop culture. Never afraid of going bankrupt, he is well-known when it comes to bling spending.

This Rap Superstar has mentioned in one of his interviews that he spends around $150,000 for his diamond-covered teeth. He does not have the ordinary detachable grills like the others. His grills are permanent. Due to his deteriorating dental health, he decided to get a permanent set to immortalize his smile. A big time spender when it comes to grills Lil Wayne maybe setting a new type of grills with his permanent sets. Instead of getting ordinary prosthetic teeth celebrities might get the new personalized and iced-out ones.