As a huge Agatha Christie fan, I love a good murder mystery. And Death Drop is a good, old fashioned murder mystery, just with added drag queens. It has the lonely, cut off country house, the stormy night, the cast of characters, none of whom have met their host before, and then it has the mysterious deaths. But there the resemblance to ‘And then there were none’ end. Because I don’t think any of the deaths in that remarkable Agatha Christie story were the fault of a Findus crispy pancake… 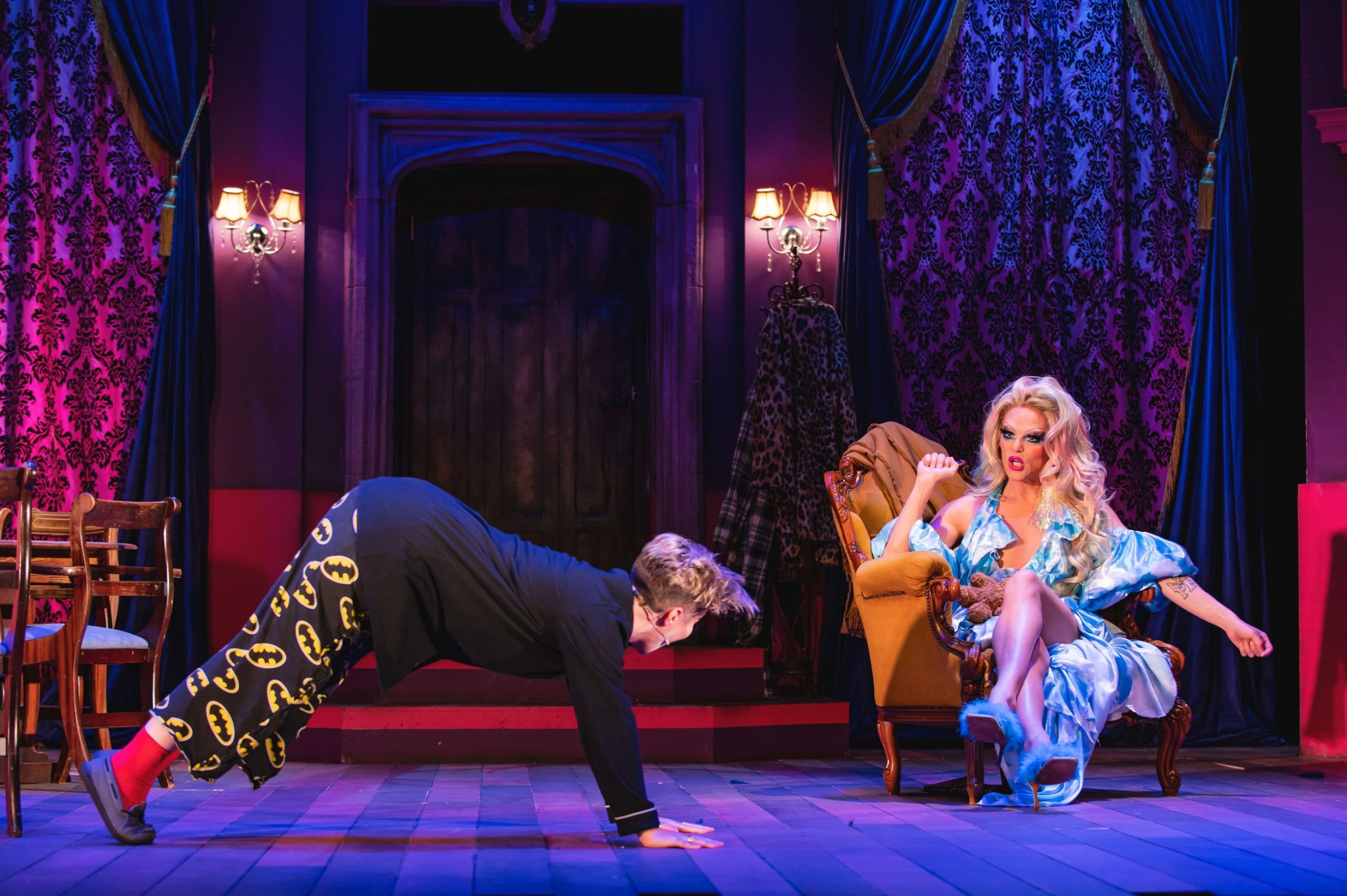 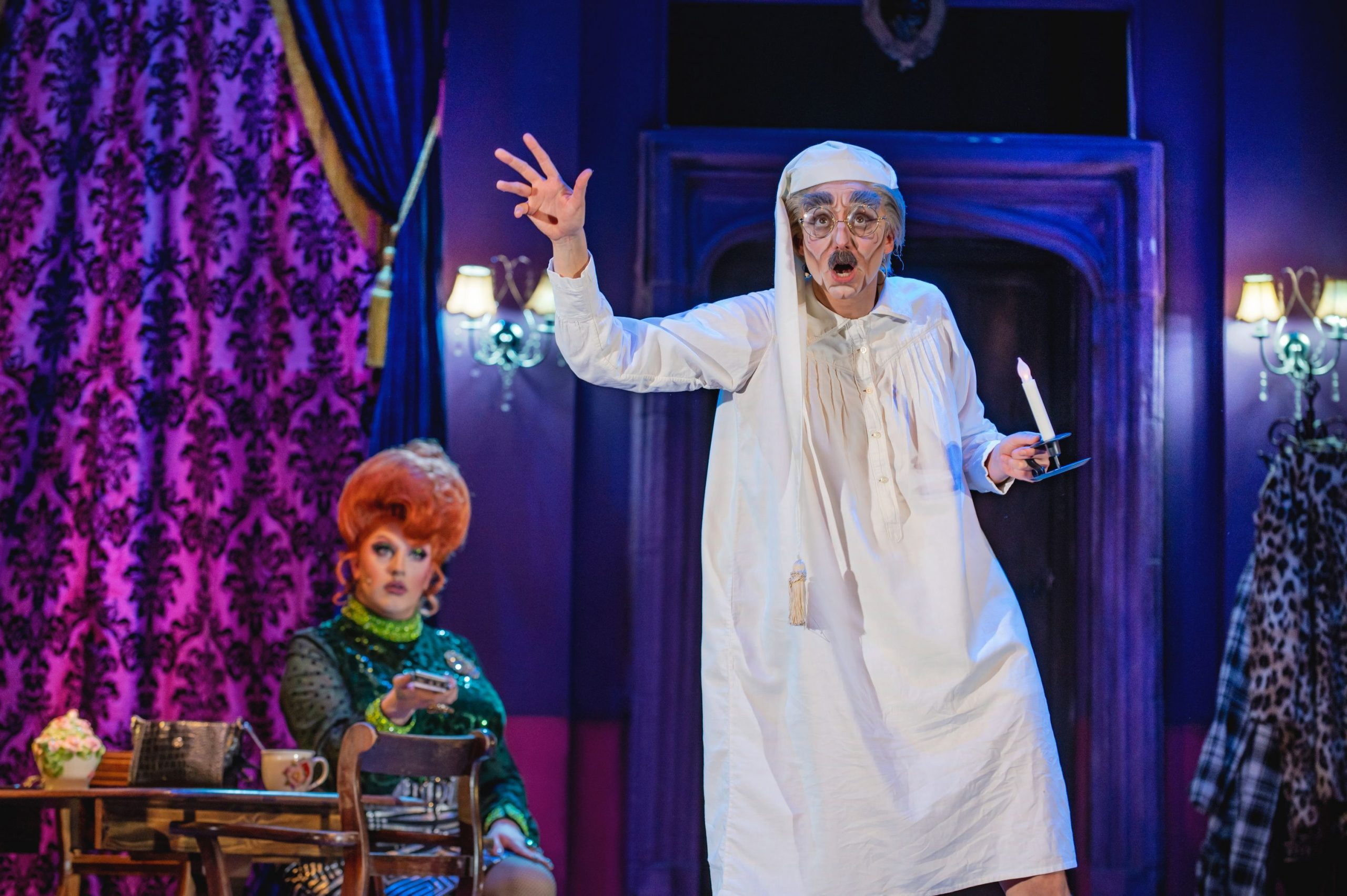 On a cold and stormy night, a group of people are invited to a party to celebrate Charles and Diana’s 10th wedding anniversary (yes, that Charles and Diana, keep up.). Their host is Lady Von Fistenburg (Vinegar Strokes), but none of the guests have ever met here before, and come to the celebration believing they might meet the royals themselves. Amongst the guests are a former pop star Shazza (Willam), a weather girl Summer Raines (Ra’Jah O’Hara), the editor of the World of the News Morgan Pierce (Karen from Finance), a tory MP Rich Whiteman (Richard Energy), and a TV producer Phil Maker (Georgia Frost). They are looked after by a trio of sisters, Blue, Brie and Spread (all named after their mother’s favourite cheeses and played in hilarious style by Holly Stars), whose cooking skills are limited to Frey Bentos pies and Vienetta. But as the storm gets worse and the guests start to wonder why they have been gathered together, the body count starts to rise. Who is the killer, and will anyone survive the night? 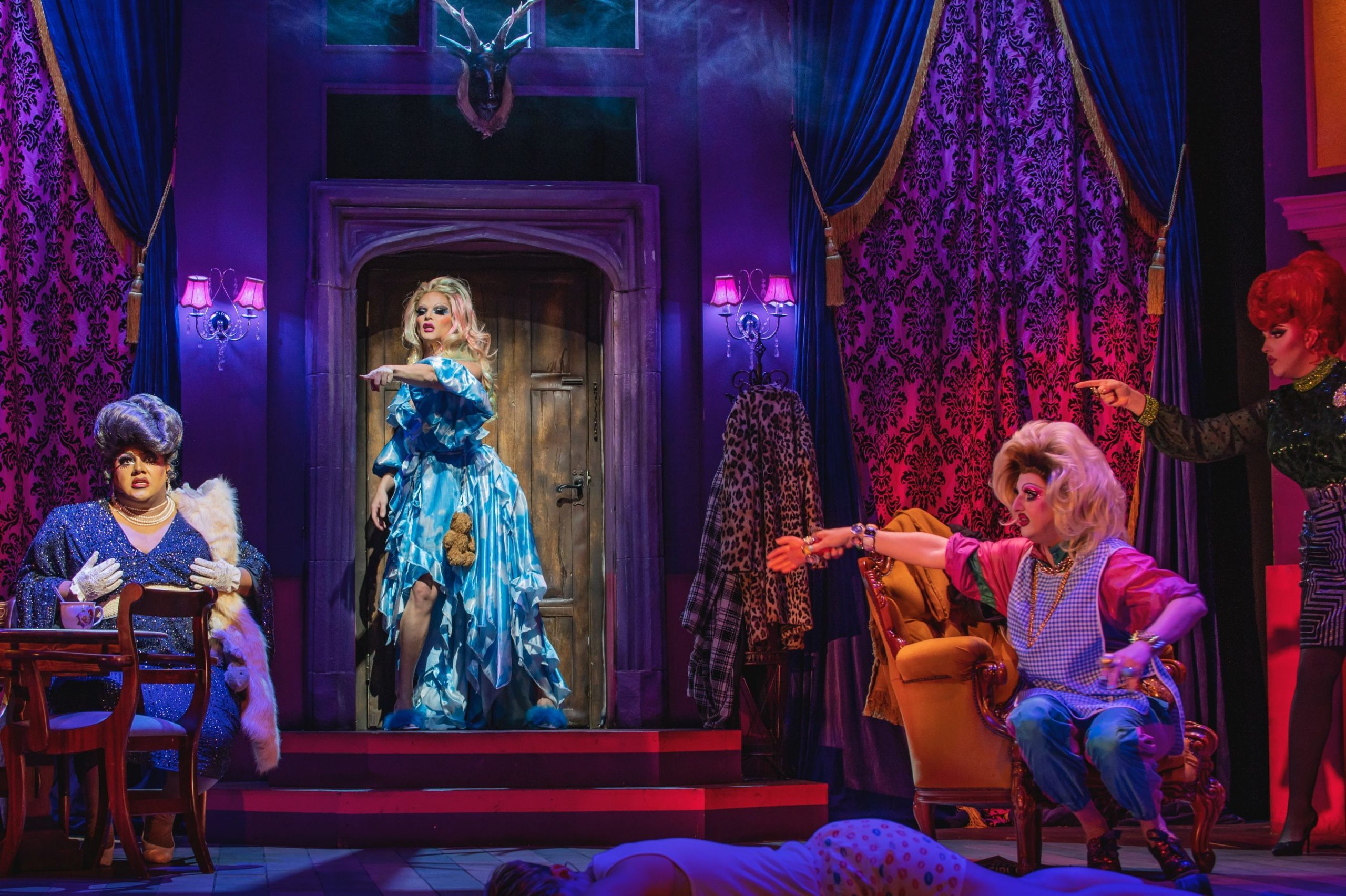 The beauty of Death Drop is its knowingness. Set in 1991, there are many bad taste jokes about everything from Charles and Diana to Jimmy Saville, as well as very bawdy scenes with rude sexual innuendo that had the Birmingham audiences laughing until they cried. The whole cast is on top form, hilariously overacting in everything from voices to mannerisms, with Richard Energy’s constant funny walks as the tory MP just one of the highlights. Shazza’s opening song to act two, complete with Stevie Nicks styling, and 80’s dry ice, is another standout moment, whilst the one liners come thick and fast, as do the tongue twisters which are a recurring theme of the show. 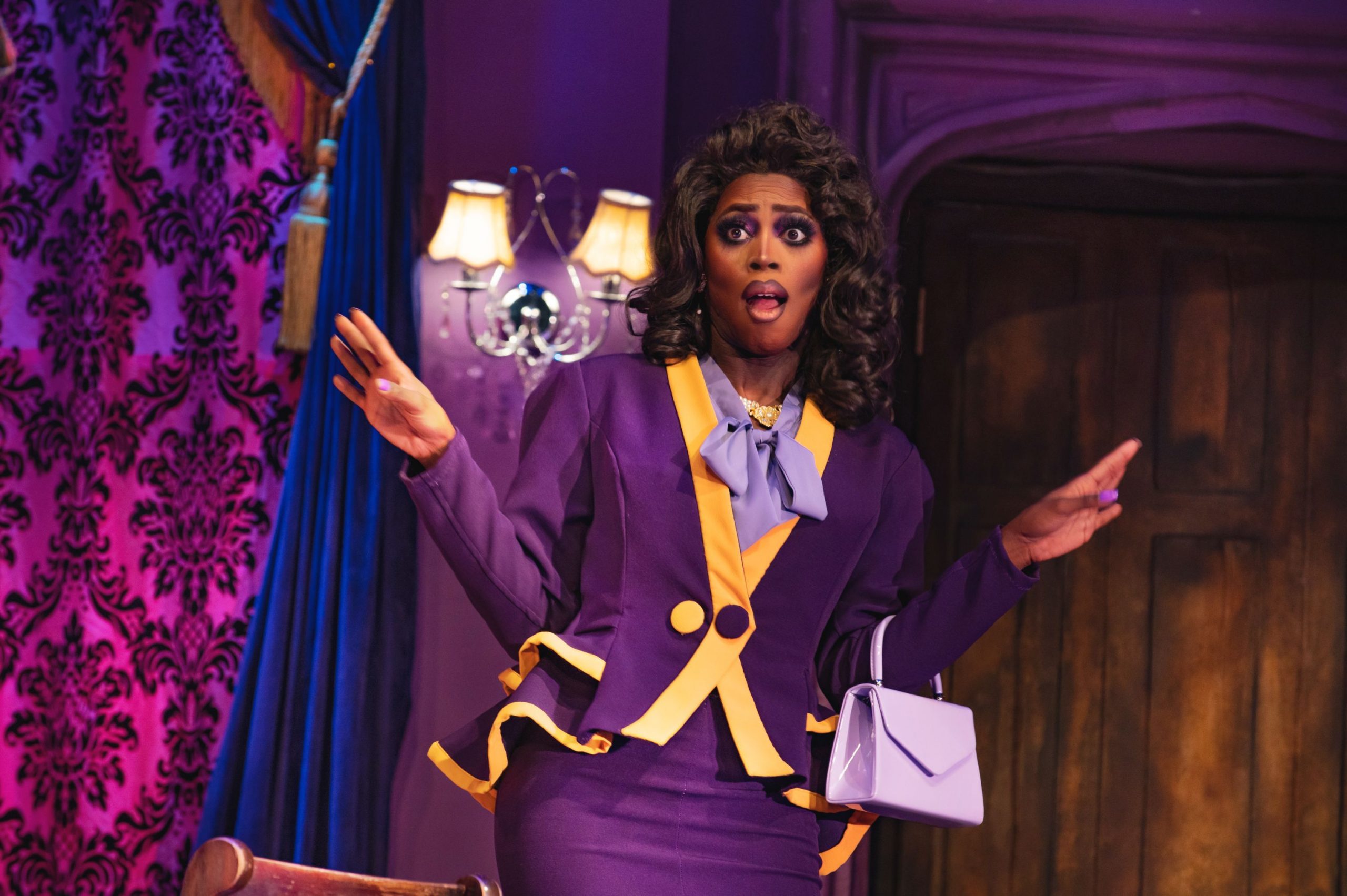 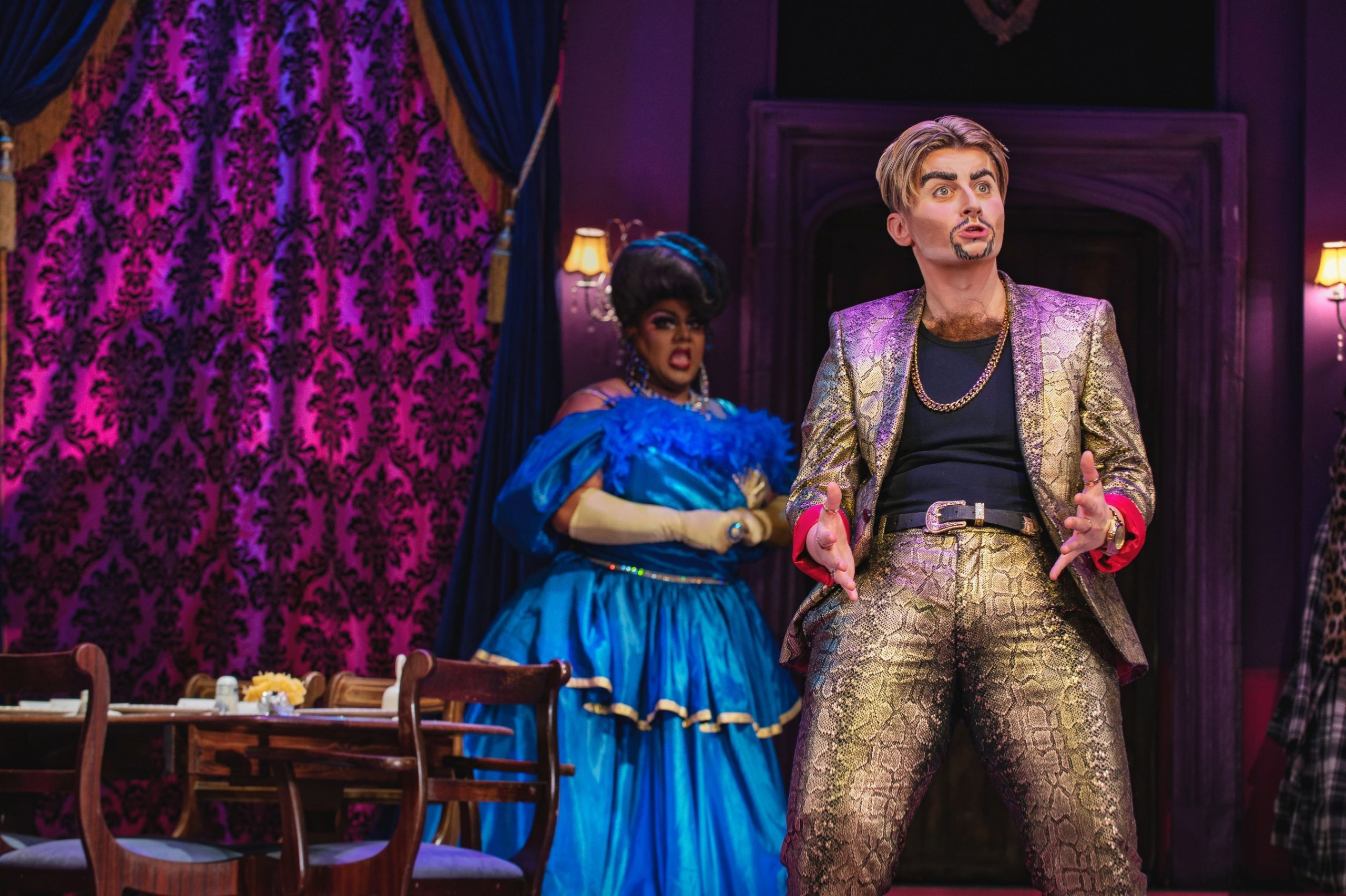 Death Drop is funny, at times side splittingly funny, and is rude and outrageous, all in one delicious package. Go and see, but, beware, if you sit too close to the front, you may require a hood…