We have just seen the end of London Fashion Week, following hot on the heels of New York fashion week, and it is safe to say that two of the brightest, most interesting Autumn collections come from two style mavericks who first came to our attention in the 1970s. Both Vivienne Westwood and Betsey Johnson are at an age when they could relax and put their feet up, instead, at 69 and 68 years old respectively, they are continuing to push fashion boundaries. Here are some of the highlights of their recent collections.

Alice in Wonderland meets the Royals!

As can be expected of the woman who was at the forefront of the Punk/Fashion movement, Vivienne Westwood doesn’t mince her words. In recent weeks she has insulted Emma Watson, the newly crowned ‘Elle Style Icon’ by saying she didn’t know who the actress was. This week she turned her attentions to Kate Middleton, saying of the royal bride-to-be “..I would have loved to have dressed Kate Middleton but I will have to wait until she kind of catches up a bit somewhere with style…”. Harsh words, but Vivienne is well placed to have that opinion. Almost 70, she is as relevant as ever to British fashion. At the Brit awards, she was the designer of choice for girl of the moment Jessie J, for Ellie Goulding, Katherine Jenkins and Paloma Faith, whilst she designed the actual award. Helena Bonham Carter, a long-time fan, has worn Westwood designs for all awards ceremonies, whilst young starlets like Diana Agron are also part of the Westwood Fan club.

The show took place at London’s Royal Courts of Justice, and was a fusion of the Royal Family meets Alice in Wonderland, with Charlie Chaplin style hats, crowns fashioned from the model’s hair, red and blue plaid, flat caps and headscarves reminiscent of Her Majesty at Balmoral. 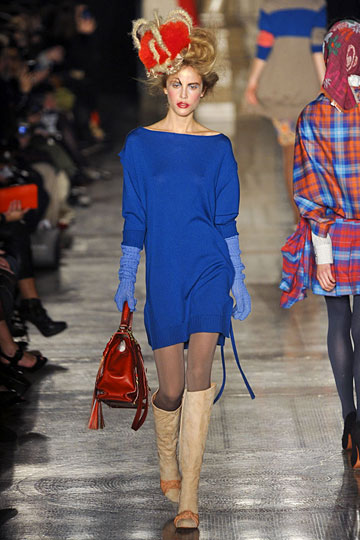 hair fashioned into crowns and royal blue - of course! 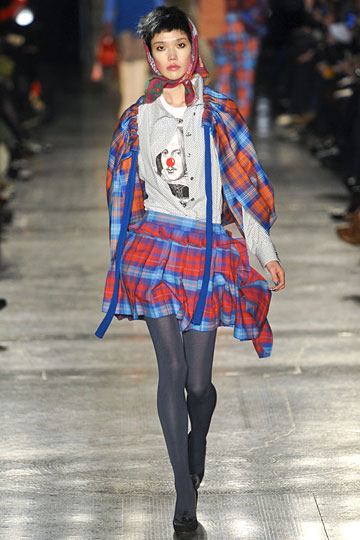 The collection featured lots of layering. There were long argyle socks worn over tights, jumpsuits worn over tops, shirts over t-shirts and coats over everything. The look was very mismatched, but there were flashes of English heritage tradition in the argyle prints, tweeds and wooly socks. Animal prints were also an integral part of the collection. 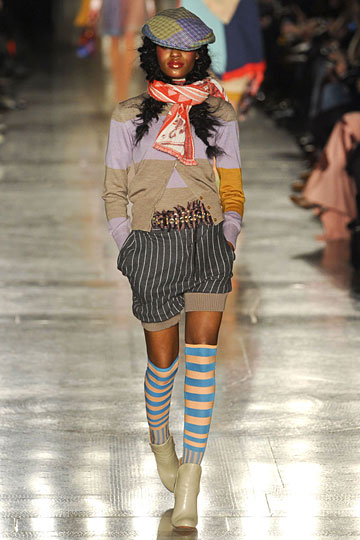 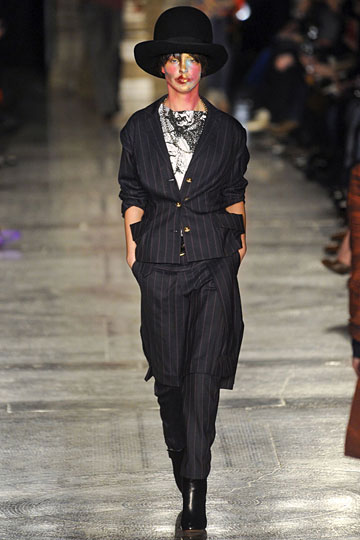 Some of the pieces were extremely wearable and will translate perfectly to an Autumn wardrobe. The pinstripe trousers worn with the camel jacket looked cosy and stylish, whilst the grey double-breasted coat was a beautiful piece of clothing. I also loved the high collared Chartreuse green/gold coat. 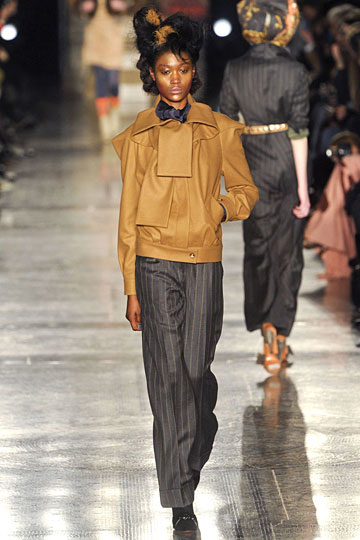 All elements of English Heritage in one outfit - what's not to love? 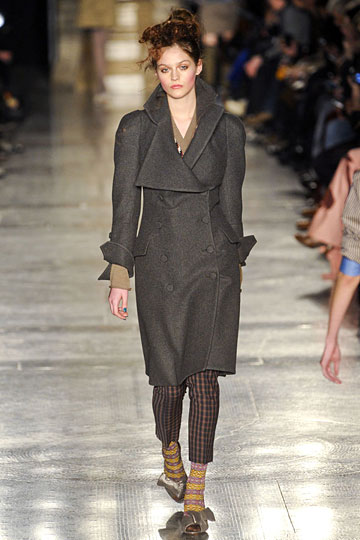 Think Nicola Roberts will be seen in this... 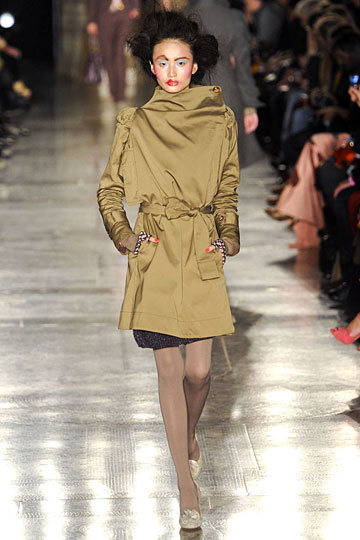 ...although this would look amazing with her red hair.

The most successful looks of the collection were the sexy Westwood dresses. These are perfect for Vivienne’s real women like Paloma Faith and Helena Bonham Carter. The dresses had an off the shoulder style that showed acres of cleavage for a look that was sexy dishevellment, a sort of just tumbled out of bed look. The blue dress would be perfect for Jessie J if shortened slightly, whilst the beautiful red dress modelled by Daisy Lowe was a perfect showcase for her curves. I particularly loved the mens style pinstriped blazers draped over the shoulders of the party style dresses – a nod to girls who face the cold to flash the frock. 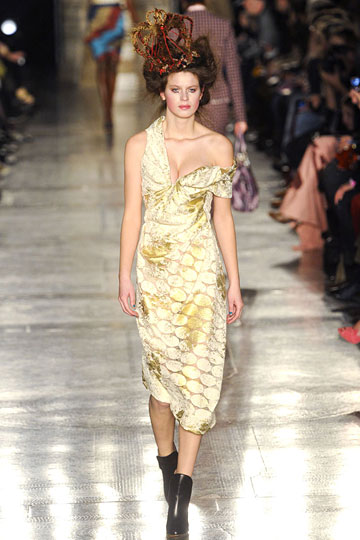 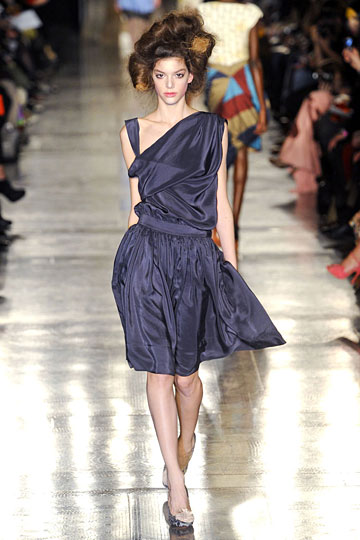 shortened slightly..this would be oh so Jessie J 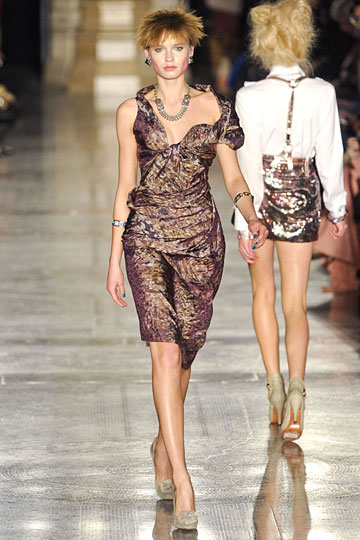 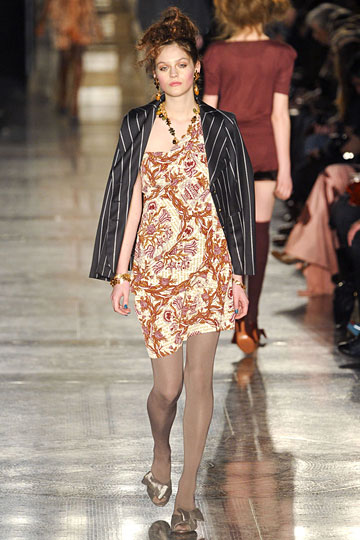 Overall, the collection was another triumph for Vivienne Westwood, full of texture, colour and humour. I loved it and look forward to seeing it translated by the fashionistas.

Betsey Johnson is an American style eccentric, beloved by fellow fashion mavericks. Remember the anchor print dress that Amy Winehouse wore to marry Blake? That was Betsey Johnson. What about Agyness Deyn in a gorgeous blue strapless prom dress? Betsey again. Kelly Osbourne wore a Betsey pink dress straight off the runway during the S/S after show party last year. This years show had Jessica Hart and Patricia Field on the front row, and also had the employees of Betsey Johnson modelling the ‘Pink Patch’ collection. 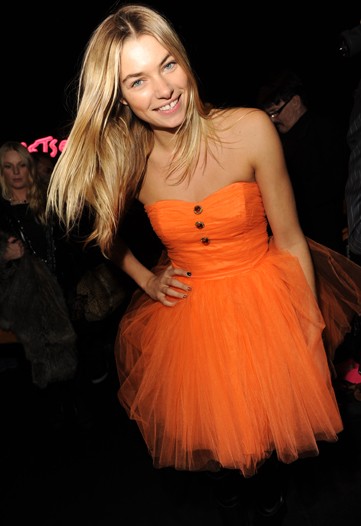 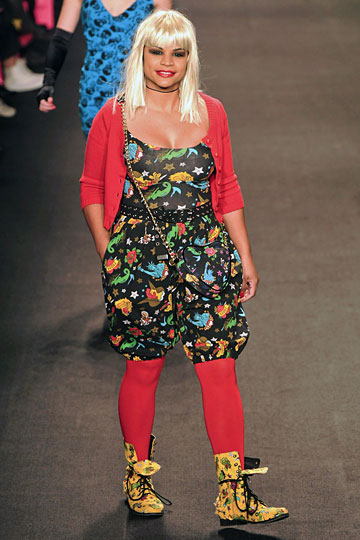 Betsey Employees take to the Catwalk with trademark Betsey hair.

The collection itself was typical Betsey. There were beautiful devore style dresses worn over zebra print bodystockings,  elaborate frock coats with Mozart style ruffles worn over the same zebra bodystockings. Animal print was everywhere – red leopard, traditional cat-prints mixed in a way that should never be attempted by mere mortals, but works in Betsey’s designs. 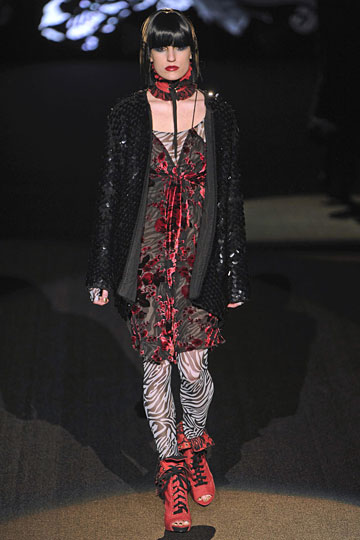 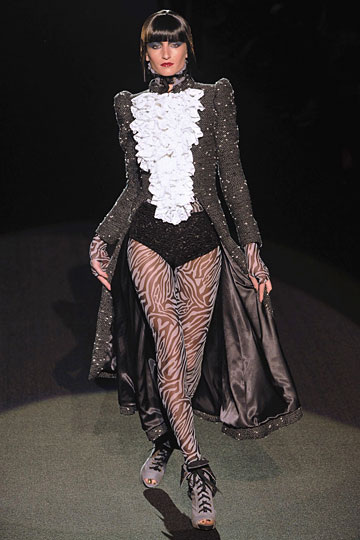 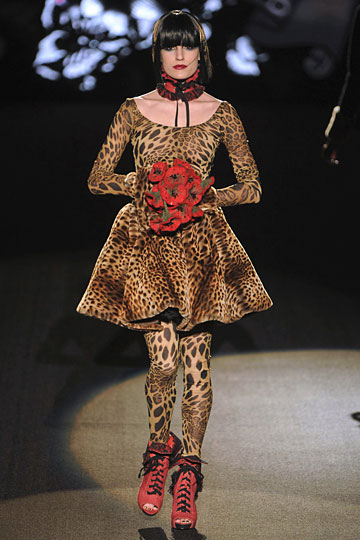 There is a touch of Eva Peron about the use of red poppy corsages to add details to the shoulders. I love these Spanish touches, which add class to counterbalance the red animal print bodies. I also really loved the fur tippets and muffs used to add vintage elegance to totally modern looks. 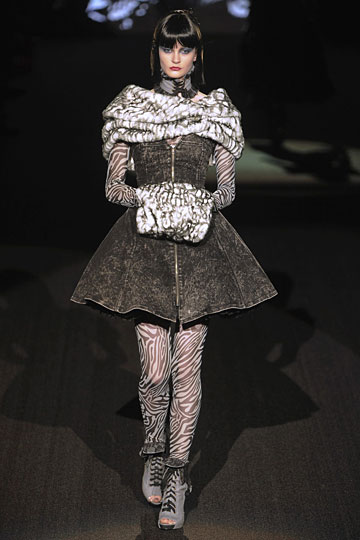 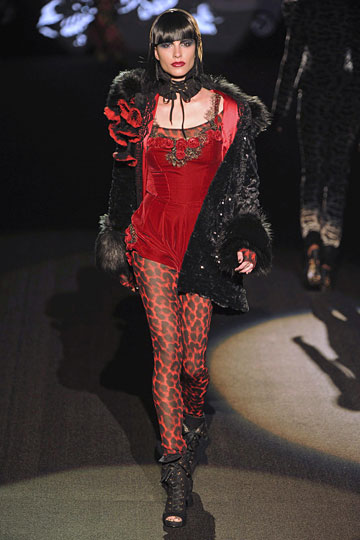 The perfect name for this collection would be ‘falling into granny’s wardrobe’, because that is the overall effect of many of the outfits. Pretty teadresses and tippets worn with outrageous tights and DM boots, elegant evening dresses with heavy footwear. It is experimental, like when teenagers attack the wardrobe of their mom, or charity shops in search of their style. The beautiful brocade style cape worn over the red evening dress has the look of a treasured vintage find, whilst the flamenco style maxi dress is a real flashback to 1970s style. 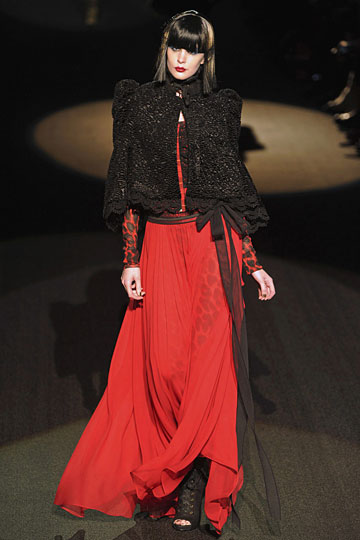 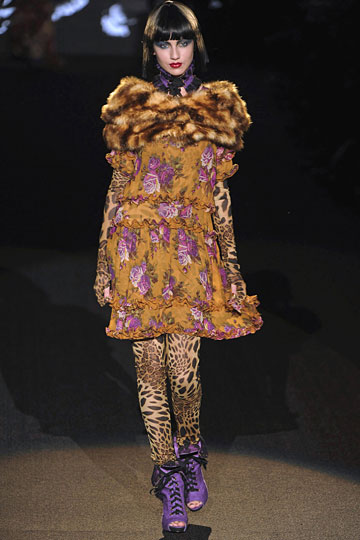 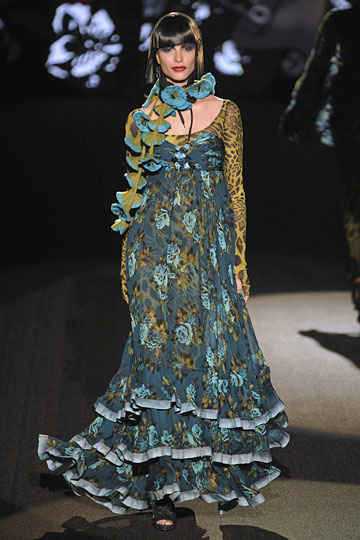 Betsey’s collection shows that there is very much a place for the experimental style gurus in the modern fashion world. She ended the show with her trademark cart-wheel, showing the sense of fun that is always so apparent in her extrordinary designs.