Every year at Christmas, Birmingham Town Hall stages a family show that is based on a children’s classic story. In the past this has seen great adaptations of ‘The Tiger Who Came To Tea’ and ‘We’re Going on a Bear Hunt.’ This year they have turned their attention to Julia Donaldson with a dramatisation of ‘What the Ladybird Heard’. And whilst it is bright and colourful, and generally good fun, I don’t think it has the same appeal as recent productions. 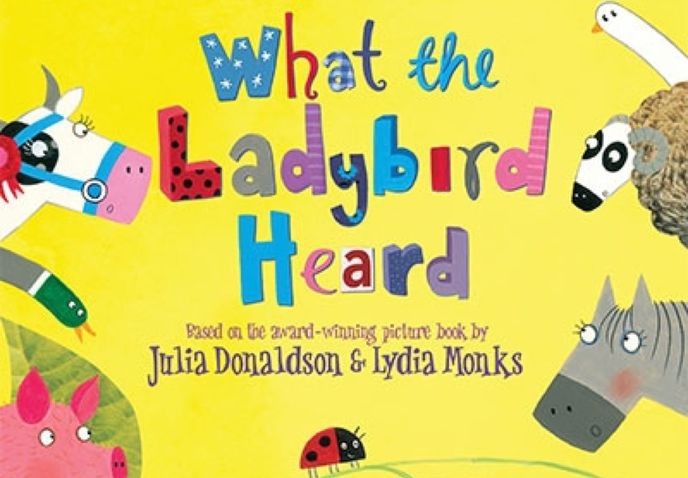 The main reason for this is the star of the show, the ladybird. My eight year old Joe said, I think the ladybird should’ve been much bigger, maybe someone in costume. And whilst this may have been the biggest ladybird in the world, I can sort of see his point of view. From our seats in the balcony, the ladybird, which was created as a hologram, was quite hard to spot at times, especially for my three year niece – we had to keep pointing it out, which sort of defeats the object.  The same is true of the cute talking cats in the windows and the tractor and vehicles seen in the distance – they are just too small for such a visual play.

But there are plenty of other things to recommend the show.  The characters are fresh and funny, with Raymond being the standout favourite for the children. The creation of the farmyard animals from things like bicycles and wheelbarrows is magical, the hog in particular is brilliant and made the children laugh and gasp, and there are some good songs, including the one about the burglars, which help to set the scene well, although I do think that most songs are overlong for the age of the audience.

Ultimately, ‘What the Ladybird heard’ is a good introduction to theatre for young children, particularly if they love the original Julia Donaldson story. At just under an hour in length, it is probably the right amount of time for young children to sit through. And there are moments of magic, but, to me, it just isn’t magical enough.

WHAT THE LADYBIRD HEARD

One thought on “What the Ladybird heard at Birmingham Town Hall”