I lost my nan to an aggressive form of Alzheimer’s. This was in 1998, but even today, almost 20 years on, I can still remember everything in vivid detail, from the moments when we cried with despair that there was nothing we could do, and laughed out loud because it was the only thing to do. Alzheimer’s takes away the person you love, even if they are still there in body, and despite the fact that it affects so many people – 1 in 14 people over 65, 1 in 6 people over the age of 80, it is still a disease that we seem to know so little about, or talk about in any sort of real detail. 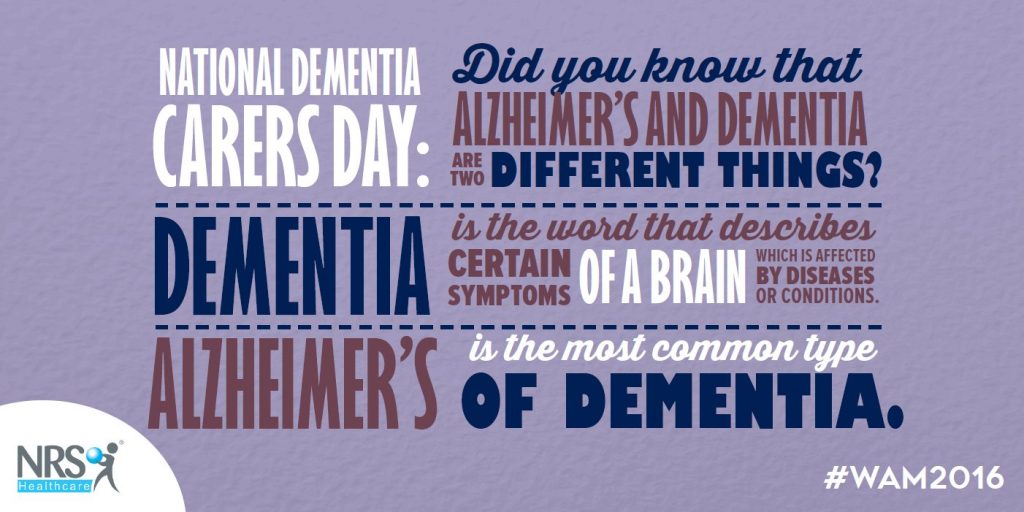 NRS Healthcare, a provider of disability and living aids are currently in the middle of a really worthwhile social campaign designed to bring more awareness to all aspects of dementia and Alzheimer’s disease. They are supporting World Alzheimer’s month by sharing one interesting fact about the disease every day throughout September through their Twitter account at @NRSHealthcare. There are facts about factors that can increase the chance of developing Alzheimer’s, as well as suggesting things that could help those who have developed the disease.

I applaud this campaign whole- heartedly. When my nan faced the disease, the stress and pressure on the immediate family were immense, especially in the days when we were struggling to get used to the diagnosis. It is hard to have to break the news to your mother that your father has died, an horrific groundhog day where they grieve over and over. My nan had vivid memories of her childhood and youth, knocking on doors of houses where she had lived as a girl inquiring about her sisters and parents. Yet she couldn’t remember to pay the bills, or what had happened the day before, and eventually people were forgotten too, lost in some fog in the mind that mercilessly takes away all the things that make a person so special. Think of those houses destroyed during the blitz, a facade left standing with nothing behind it. That is Alzheimers.

We need campaigns like NRS Healthcare’s, and days like National Alzheimer’s day (21st September) to raise the awareness of what people live with on a day to day basis, and how their loved ones are suffering, often in silence, as they try to shoulder a burden.

One of the most heartbreaking things you can ever face in life is the reality of knowing a loved one had Dementia, and is no longer the person you know and love. Trying to cope with the fact, and choosing the right thing to do for both you, your wider family, and the person living with the dementia is difficult, with the care and safety of the sufferer being paramount, but trying to balance that with the feeling of guilt if you have to admit you can’t cope alone is hard and painful. I speak from experience.

It is now 18 years since my grandmother died at the age of 68. She had an aggressive form of alzheimers that took just over three years to kill her brain, and eventually kill her. We had not been aware initially just her advanced her disease was as my grandad had covered and protected her, but my grandad died in 2006 and we were suddenly faced with a situation of a women who could no longer care for herself, whose reality was often steeped in the past, but whose present was  very difficult. Bills were unopened and stuffed into drawers, she would leave the house in the middle of the night to look for my grandad – my husband once found her sitting in a bus stop at 4am waiting for a bus ‘to work’ (she’d been retired for years.). Her house became dirty, and she couldn’t settle – she would pace, holding her handbag and looking out the window for who knows what. It was distressing – and made all the more distressing because we had no space for nan to live with us.  Nan had to go into a care home for her own safety and to receive proper care. But in 1998 there was little choice or information about choosing the right home, and this was a very difficult time for all the family.

May sees Dementia Awareness Week, a sign of how far we have come in the understanding and treatment of Dementia. Care homes provider Barchester Healthcare have a range of different types of care home around the country, some which actually specialise in Dementia care, and their website is an invaluable source of information about what you should look for when trying to choose a home for a loved one – this just wasn’t available when my nan was suffering. They recommend visits and even trial stays before you commit to an establishment, something that I think could give you some peace of mind at this most horrible of times. Their dementia care homes guide  is very useful, it comes complete with questions to ask and checklists.

Dementia is a condition that cannot be cured, but it is comforting to know there are now places that sufferers can live in comfort and safety, with their families safe in the knowledge that their loved one can experience a good level of care.