Following on from the Megableu games review that arrived just in time for Halloween, we recently received three further games from Megableu to play with and enjoy. The games were Cobra Attack, Trickin Camel and Alien Mission, and either one of these would be a very welcome addition to any child’s Christmas stocking. They show that games have come a long way from Ludo and Snakes and Ladders.

Joe totally fell in love with Cobra Attack, not least because it is a game that centres around a snake, which is my number one phobia and hence is very funny in the eyes of a 6 year old. The Cobra Attack game is easy to play, with a fabric snake that slots very easily into the plastic, woven effect basket.  The rules are really simple, you are trying to retrieve the emerald, of which the cobra is the guardian. You may move as long as the snakes eyes are green. But beware, if his eyes are red, he is watching you. You have to  grasp the emerald before Cobra sees you? After being caught 2 times, the Cobra jumps out of his basket and you lose! 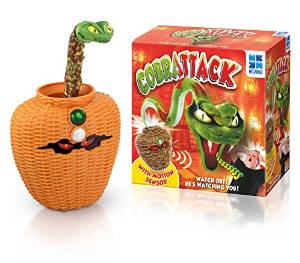 I really like that this is a decent, sturdy game, it doesn’t feel like it will fall to pieces after a few uses. I also love that this is a game that can be played by just one person, it means Joe can literally enjoy this any time he wants to, without needing an adult or a friend.

Alien Mission is a lot like Ghost Hunt in that you need the goggles and the gun to attack the aliens who appear on the walls all around the room. This game again is great fun, and best played in twos so you can attempt to beat each others scores. (We get very competitive in our house!). Take care though, you only need to shoot the aliens. I was very trigger happy and was shooting the robots too, it is just the aliens you need to get rid of. 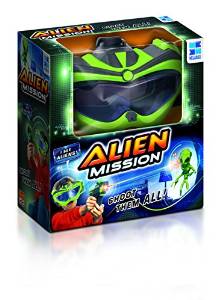 We also have a third game that we have not quite got around to reviewing yet, this is the Trickin’ Camel that reminds me of an updated Buckaroo, the camel throws the bottles if he gets annoyed. We’re looking forward to enjoying this one once Joe breaks up from school. 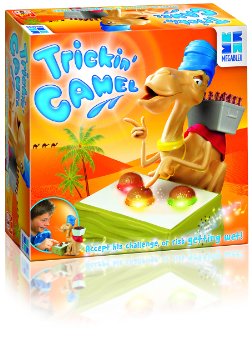 You could win all five of the MEGABLEU games that we have been  reviewing. The games are Ghost Hunt, Cobra Attack, Creepy Hand, Trickin’ Camel and Alien Mission . You can enter below before midnight on the 6th December.
Megableu games giveaway

Every child loves a message from Santa, whether this be a personalised letter or a visit to a grotto. Last year I discovered a third way of receiving an amazing letter in the form of a video from Portable North Pole. This is a unique and personal video that can be created for any child, with the gold package, which gives you access to unlimited videos in a range of themes, costing just £9.99. 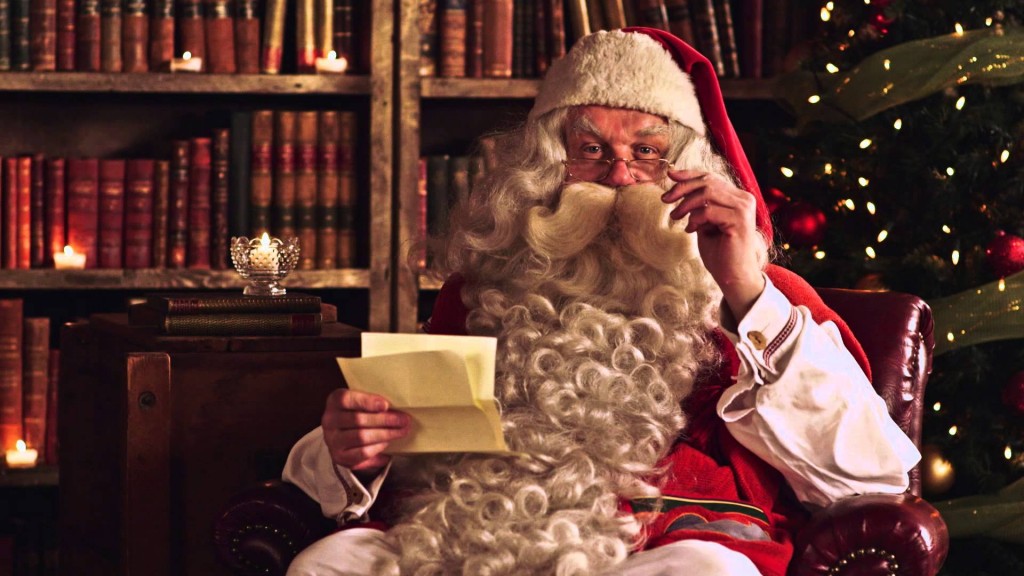 PNP videos are just so much fun, they have been created to a really high specification, looking just like a mini Hollywood movie. Santa is just how you would imagine him to be, and the elves and music are really enchanting too. The use of the machines to see who is on the naughty and nice lists are super cute, and I love that you can add real pictures of your child, names of their friends and lists of their achievements throughout the year. Your child will truly believe that the message has come from Santa, and this will certainly help to keep that Christmas magic alive.

What you can get?

PNP is such a fun idea, truly enchanting for children, and something that has become part of my family tradition. With Joe also having a December birthday I also create a birthday message too, something which is again easy to do and can be part of your package.

Have you tried PNP?

Get in on the action, join the Twitter party tomorrow.

On Friday I had the most exciting of evenings. I was a finalist in the Birmingham Awards in the catagory of best blogger, shortlisted from literally thousands down to just five. I didn’t win, but still had the most amazing night, not least because I was dressed for the occasion by one of my favourite brands Kaliko, in a dress that I can only describe as perfect. Even though I do get to go to some pretty glamorous occasions, the chance to do proper black tie was a mouth- watering prospect, and this dress just ticked every single box, in terms of colour, cut and design. People talk about dream dresses, and this was certainly mine. 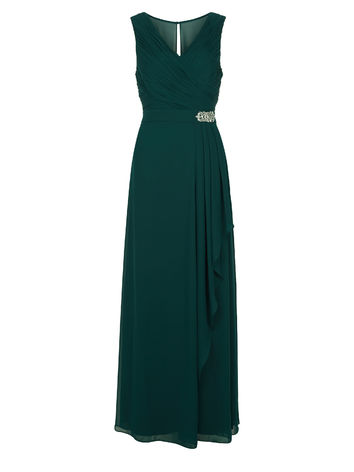 The waterfall maxi dress is a semi fitted dress in chiffon. It has a faux crossover neckline with pleating detail, a waterfall draping detail on the skirt and a diamante embellishing detail on the waistband. The dress has a concealed zip fastening on the back, and there is also a sheer panel on the back, with a keyhole detailing. But the most striking detail about this dress is the colour, a deep green, almost bottle green in fact, making this such a striking change from classic black, and very memorable. 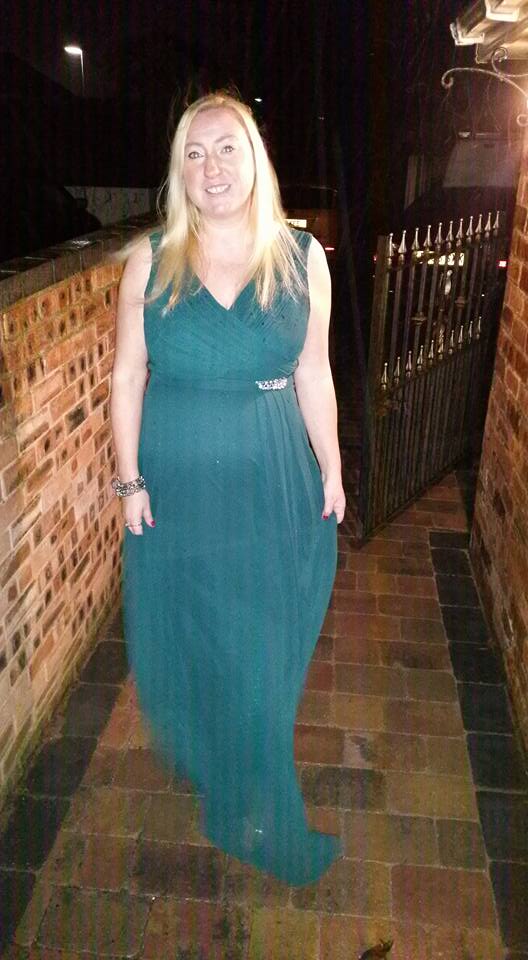 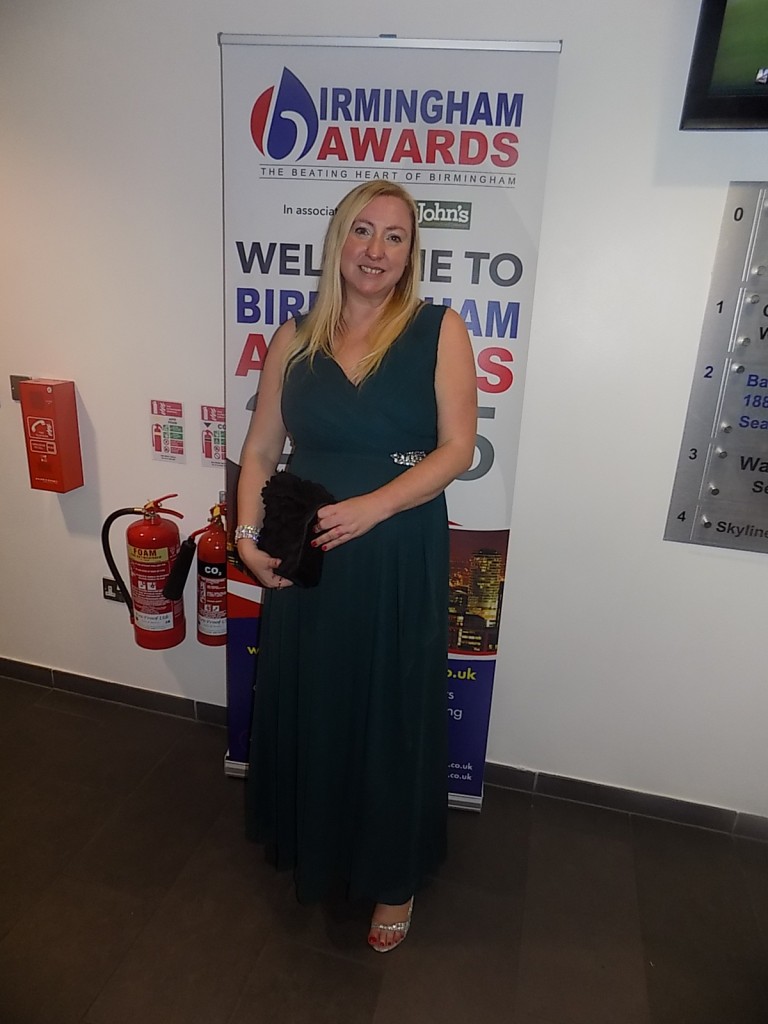 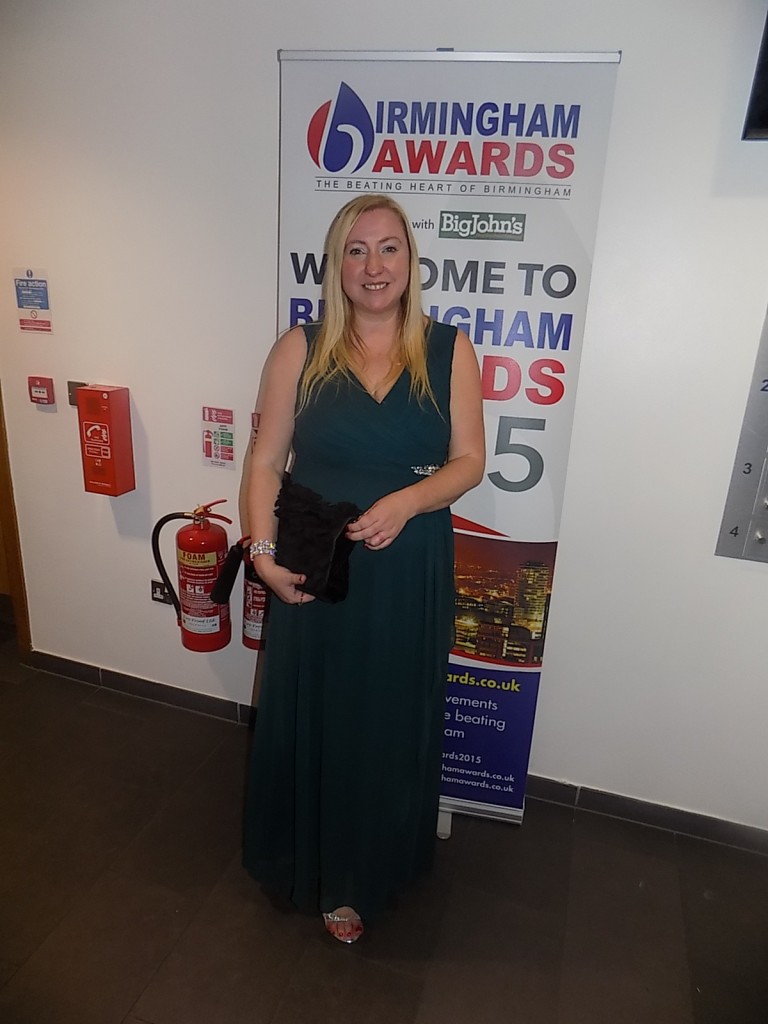 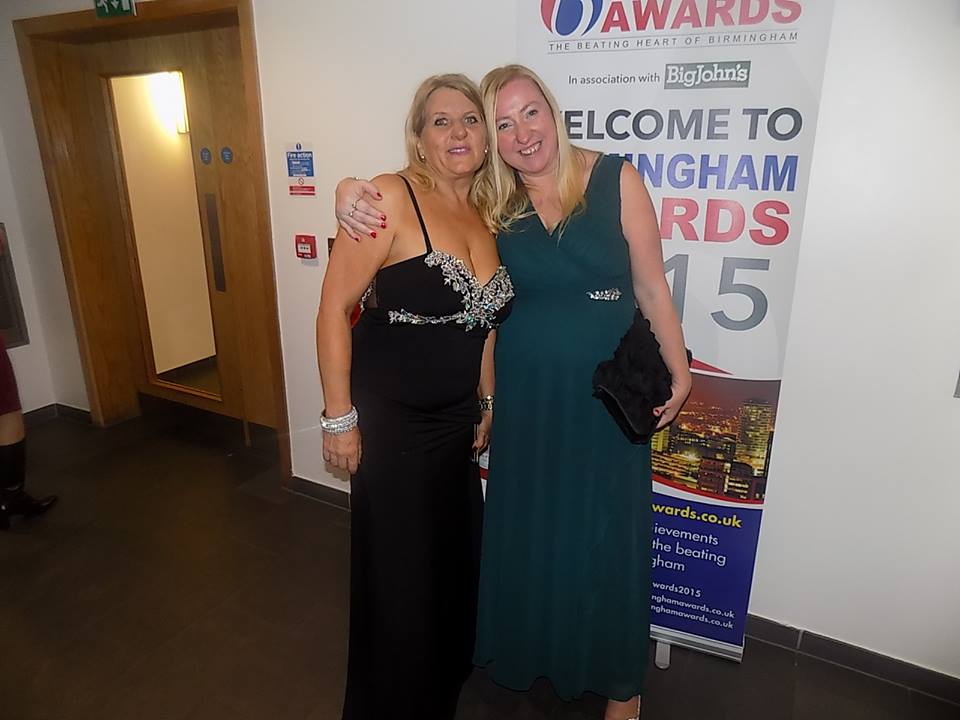 With Lisa Smith of Prepared PR 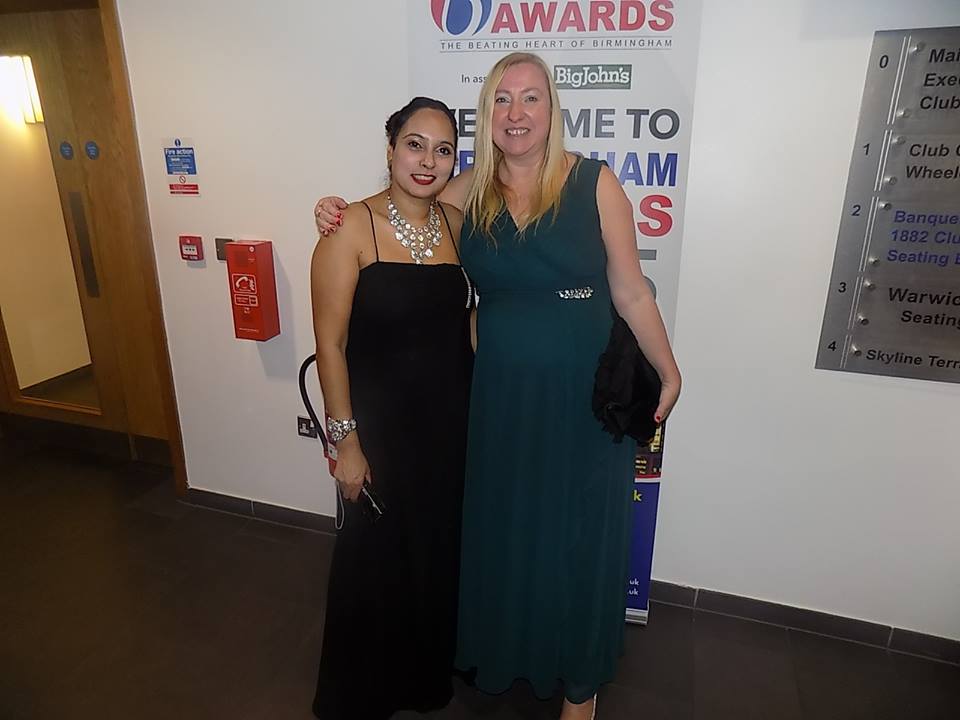 With Pushpa Alexander of Headz Up Business

This dress is a dream to wear, and it had so many lovely and positive comments on the night, I really did love wearing it. I kept the accessories to a minimum, just a silver diamante bracelet (from my mom), silver Jimmy Choo style heels and a black velvet bag, not my number one choice, but really needed something big enough to carry my camera too. 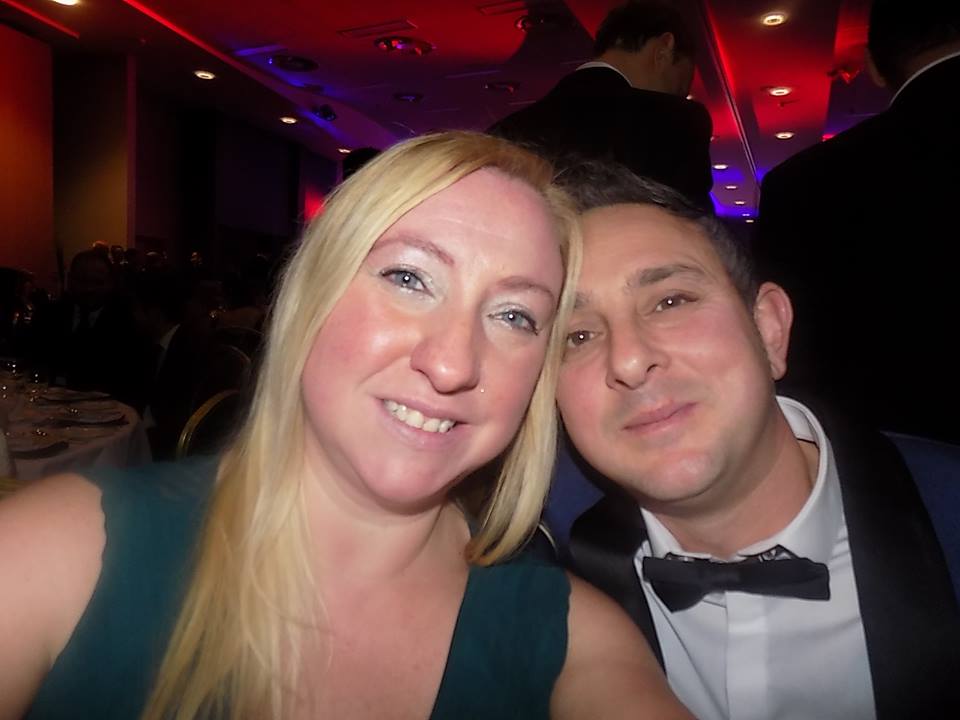 Selfie with the hubby.

*With huge thanks to Kaliko and Publicasity for the wonderful dress.