As a teen I loved The Wonderstuff and their album ‘Never Loved Elvis’. This was partly because the title was true. I’d never loved Elvis, it had always been about Buddy Holly in our house. From an early age I can remember ‘That’ll be the Day’ ringing out from my little record player, the graffiti emblazoned cover of ‘Buddy Holly Lives’ on my bedroom floor. It’s a memory and love that has remained with me, and was resurrected in supreme style last night, as the brilliant ‘The Buddy Holly Story’ electrified the Wolverhampton Grand. 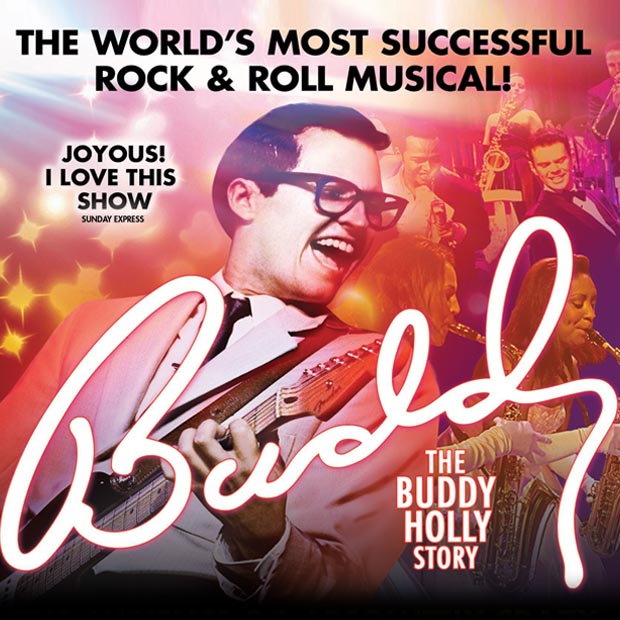 ‘The Buddy Holly Story’ is the story of Buddy’s meteoric rise to fame. If your image of Buddy is of a nice, bespectacled boy from Texas, you are in for a surprise. Buddy was a maverick genius, a passionate, sometimes volatile, quick tempered artist with a vision and focus on the type of music he wanted to make. Starting out as a future Country star, Buddy wanted to be a rock and roller, but it was all about the music, never about the image. Glen Joseph brings him brilliantly to life, the voice, the look and the attitude are all perfect, and he brings to life the man behind the legend with both verve and warmth. His Buddy can be funny, can be passionate, and during those rock and roll classics, is simply electrifying.

This is a musical where the whole cast delivers the goods. As The Crickets, Joe Butcher and Josh Haberfield are brilliant, fabulous musicians with a good sense of comic timing too. In particular are the scenes where Cindy Lou is changed to ‘Peggy Sue’ to enable Jerry to get the girl, and the long, long recording session where Jerry is virtually asleep as they record the last song, are full of fun and energy.

There are great scenes throughout the show. Matthew Quinn as Hipockets Duncan is great as he tries to interview Buddy, firing questions at the naive singer that don’t quite get the answers the listeners want. Kerry Low is a lovely Maria Elena, feisty and intelligent, and not prepared to put up with snide comments and casual racism, the scene where she talks about her recurring dream is haunting with hindsight of what was to come. Norman and Vi Petty are also crucial to the story, and are played wonderfully by Alex Tosh and Celia Cruwys-Finnigan, with Celia, in particular, delighting with her rock and roll piano playing.

In a show with so many highlights, the scene at the New York Apollo Theatre is a standout. The fear, then exhilaration as the Crickets play to an all black audience and win them over with the sheer power of their music and performance is exciting and thrilling. Mention also has to be made Minguel Angel and Jordan Cunningham as the Apollo performers for their ‘turn the house down’ version of Shout – wow, just wow!

The final scenes on the Winter Dance tour are stunning, poignant as you know what followed, but the rock and roll that comes before is incredible. Jordan Cunningham and Thomas Mitchells are both superb as Richie Valens and The Big Bopper, also to lose their life in that terrible crash, and the scenes when the three rock and rollers are on the stage together are brilliant. You can see exactly where The early Beatles songs came from, they were the songs Buddy Holly never got chance to make, you can see where Hank Marvin got The Shadows dance moves from – check out Buddy dancing with his guitarist. And as for the glasses – Hank, Jarvis Cocker, Elvis Costello, they all owe a debt of gratitude to the late, great, Buddy Holly.

The Buddy Holly story is an unmissable night of incredible music, 50s nostalgia and a story of a man who changed the face of music forever in a career that lasted just 18 months, but has provided inspiration ever since. Because, Don Mclean was wrong, February 3rd 1959 was not the day the music died. Buddy Holly died, but the music will live on Forever.

The 1950s were a fabulous decade for fashion, music and style. Rock and Roll, American Diners, bouncy pony tails and poodle skirts, heartthrobs resembling Elvis and James Dean, it was the time that saw the birth of the teenager and Youthquake. No wonder if still inspires fashion, film and fun.

Ladbrokes have taken our fascination with this wonderful era and have created a new online, music themed slot game. Called ‘The Vinyl Countdown‘, this is an online, five reel,  nine payline, and nine coin online slot machine. The multiple paylines increase your chances of winning.  The gorgeous images used on the slot machine include pretty bobbysoxers, blue suede shoes and gorgeous ice cream sundaes, giving this a real fifties diner look.

You don’t need to spend huge amounts to play this game, the minimum bet is 25p, with the maximum bet being £18.00. (Or currency equivalent). The maximum jackpot is 1000 coins.
You can choose to play for fun, but don’t forget you’ll need to be playing for real money to scoop the jackpot.

With winter evenings already starting to draw in, grab a glass of win and a takeaway, and enjoy playing this great new game. You could be hand jiving all the way to the bank!

WIN WITH FASHION-MOMMY AND LADBROKES

To celebrate the launch of ‘The Vinyl Countdown’ Fashion-Mommy and Ladbrokes have got together to host a very special competition. One lucky reader could win £50 of vouchers to spend at Ticketmaster, where you could buy tickets for a whole host of occasions from concerts to comedy, theatre and Sport.

To enter simply answer this question by leaving a comment in the box below.

Q. Who most famously sang the Rock and Roll song ‘Hound dog’?

The competition will end at 11.59pm on Sunday 7th October and the winner will be drawn at random and contacted by email.