Two very different conmen, a suave man of the world who may also be a Prince, or a pychiatrist, on any given day, and a young and vulgar upstart who spins an unlikely yarn in a way that could bring tears to the eyes. These were the Scoundrels who charmed and delighted the New Alex Theatre last night. It was the press launch for ‘Dirty Rotten Scoundrels’, which showed, in all it’s glory, why it was nominated for 10 Tony Awards, including best new musical. It is simply one of the best nights in theatre. 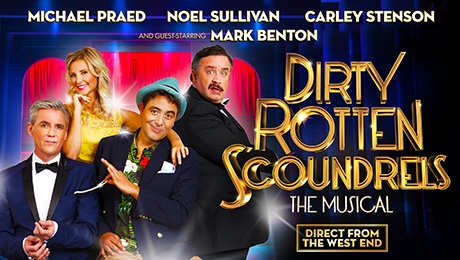 Lawrence (the suave and devilish Michael Praed) is the king of the Riviera Conmen, able to charm the jewels from rich women with a tried and tested method. He is aided in this by his loyal sidekick Andre (Mark Benton – when is he ever less that hilarious?) and together they lie, cheat and swindle, but all in the most glamorous, delightful way. But their easy rich pickings are threatened when young American upstart Freddie Benson (Noel Sullivan – a revelation) stumbles upon their schemes and demands to be taught the ways of the ‘hustle’. This starts quite well with the dispatching of an awful American heiress, Jolene from Oklahoma, in a scene that is so funny I thought my sides would burst. But then the beautiful, perfect American Christine Colgate (Carley Stenson – as sweet as apple pie) is introduced to the proceedings, and war is declared between the two conmen. Mayhem then ensues.

I must admit that I have never seen the film that Dirty Rotten Scoundrels is based on, and I think this is a good thing. I had no preconceptions around the story and performances, and so was able to enjoy this without comparing and contrasting it to anything else. To me, this was a brilliant story, expertly played by a perfect cast who all looked like they were enjoying themselves immensely. The setting of Beaumont Sur La Mer was evoked with stunning set designs of glossy Art Deco hotels and casinos, and from the first scene when we are introduced to the impossibly caddish, but totally suave Lawrence, I was hooked. 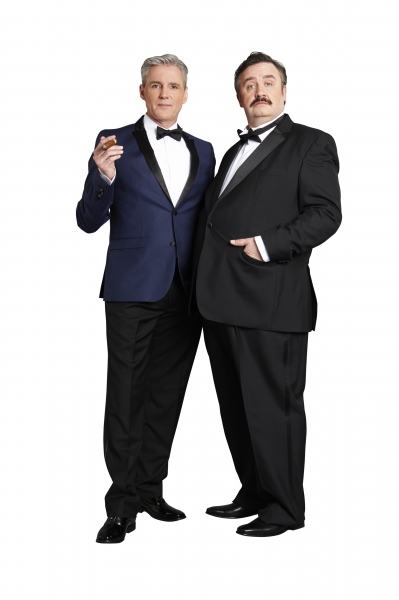 The whole cast is exceptional. Michael Praed plays Lawrence with immense charisma, but also sends up his own heart throb persona in an hilarious manner. His scenes with a mirror admiring his own perfection are laugh out loud funny. He is balanced perfectly by Noel Sullivan who was born to play the dirty, vulgar chancer Freddy Benson. When his character is called upon to play Prince Ruprecht the scene is set for a side splitting funny song that is a show highlight. Carley Stenson is brilliant as the wholesome toothpaste heiress Christine Colgate, all apple pie and selflessness, and shows that she is a theatre talent to be reckoned with. 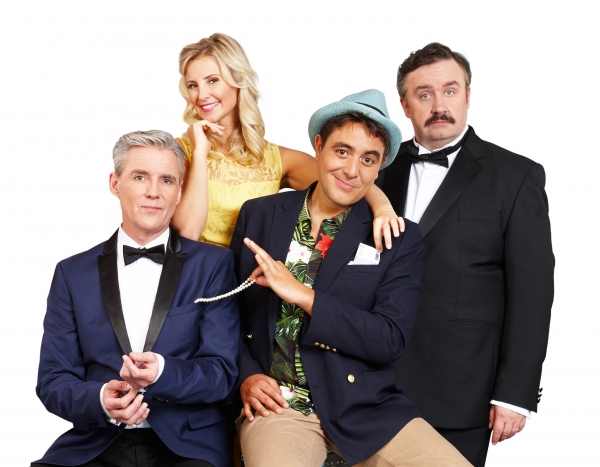 Rounding out the cast are the comic foil of Mark Benton and Geraldine Fitzgerald, bringing a genuine, touching romance to the proceedings that is both sweet and bawdy in equal measure. They are just magic together and their duet ‘Like Zis, Like zat’, complete with Benton’s mauling of the English language is just sublime.

The original songs soar, the cast is never less that delightful and a standing ovation was well deserved. Dirty Rotten Scoundrels is a delight of modern theatre that should not be missed.

Dirty Rotten Scoundrels is running at the The New Alexandra Theatre, Birmingham until Saturday 16th May. For ticket information, click here.

7 thoughts on “Dirty Rotten Scoundrels charm at The New Alex”