Last night saw the opening of the second show of the Birmingham Royal Ballet summer season for 2017. This time audiences were in for a treat, as a triple header of three short ballets charmed, thrilled, amused and shocked in equal measure. The ballets performed were Arcadia, a new ballet from BRB alumni Ruth Brill, the classic haunting Le Baiser de la Fee’ and the Gilbert and Sullivan inspired ‘Pineapple Poll’. Each ballet was wonderful in its own way – three very different ballets in very different styles. 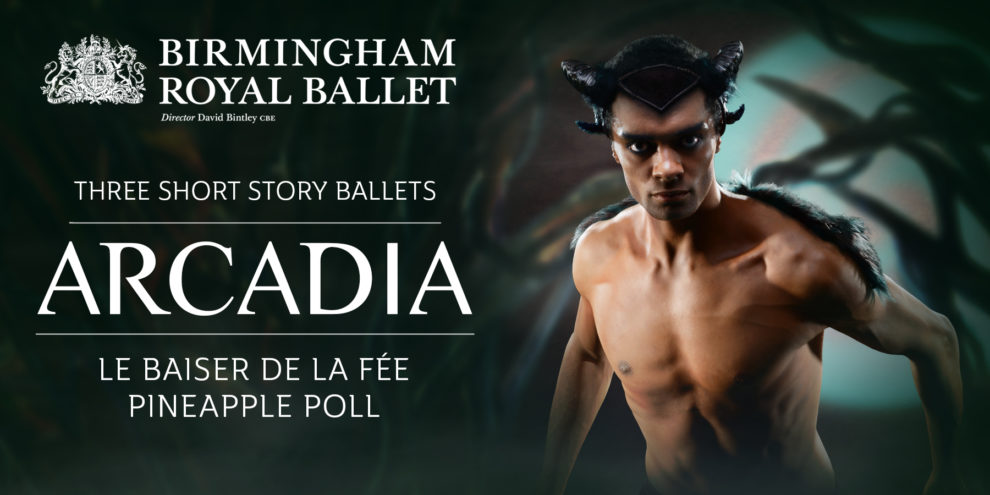 Arcadia is the story of Pan, the god of Arcadia, and has a wonderfully earthy central performance from Brandon Lawrence. Visually striking, scenes like the nymphs dancing and ignoring Pan, where the dancers Brooke Ray, Yijing Zhang and Delia Matthews are silhouetted against a stunning Arcadian backdrop, are vivid and linger in the memory.  The stunning costumes in colours that echo the forest of Arcadia are also pivotal to the ballet.  The ballet is further enhanced by the soaring saxophone solo by John Harle which creates a score that is almost Gershwin in tone. Ruth Brill has really done a great job with creating a stunning tableau that has passion and emotion.

Where Arcadia is a ballet filled with hope, the classic Le Baiser De La Fee is a haunting experience. A woman is lost in a  snow storm, trying to protect her baby, when she is ambushed by a fairy and her attendants. The woman tries to protect her baby, but the sprites take the child from her and the woman dies in the snow. The fairy kisses the child on his forehead but is then disturbed by villagers who find the child and his dead mother. Many years pass, and the child grows into a young man, in love with his soon to be bride. However, happiness is not to be there’s as the fairy returns to claim the young man. She tricks him into believing she is the bride by wearing the veil and he is horrified to find that he has been tricked, but is powerless to resist her charm and beauty.

This is a beautiful haunting ballet which truly transfers you to a world of snow and ice. There are lighter, exquisite moments, like when the lovely bride (Momoko Hirata who dances so prettily, an utterly charming performance) dances with her attendants in her wedding veil. This is a scene that is enchanting and lovely, such a contrast to the passionate, almost tortured scenes with the young man (Joseph Caley) and the Fairy (Jenna Roberts). Joseph Caley once again shows himself as a dancer who can express so many emotions from happiness to fear, passion and delight, a real leading man. Jenna Roberts is exquisite as the rather dangerous fairy, a glittering and glamorous presence.

This is a ballet that is filled with powerful moments, and the denouement, when the fairy has finally ensnared the young man, and his heartbroken fiancée is disconsolately searching for him, is as disconcerting a moment as you will find in a modern ballet.

Just beautiful in every way. Pineapple Poll is a delight, a superbly funny piece of ballet in the style of Gilbert and Sullivan.  The Birmingham Hippodrome stage was transformed into Portsmouth in the Victorian Era as the handsome Captain Belaye charms every woman he meets, including Poll, who sells her trinkets by the quayside. Captain Belaye has the same effect on other woman too, as Poll discovers when she stows away on his boat disguised as a sailor. All the other wives and girlfriends of the sailors have had the same idea and have also stowed away, leaving the Captain with a ship crewed entirely by women. Much hilarity ensures as the woman try to keep up their disguise whilst swooning over the dashing captain. Poll was danced wonderfully by Nao Sakuma, who showed a wonderful sense of comic timing, especially in the scene on board ship where she faints twice, first from the sound of the cannon, and then in a swoon for Captain Belaye. The captain is also wonderfully danced by Mathias Dingman, who plays the role with his tongue firmly in cheek, but dances a dream, particularly in the hornpipe inspired dance. Balaye’s fiancee Blanche (Laura Day) is also hilarious, playing the pretty, pampered princess like a wind up doll to brilliant effect, whilst Kit Holder as Jasper, the pot man in love with Poll, gives the ballet emotion in the scene where he believes Poll is drowned.

Pineapple Poll is such a lovely, funny experience, it leaves you with a wonderfully warm glow.