For as long as I can remember, I have been a fan of The Beatles. As a child I had one of those ‘first’ record players (I know there are some people reading this right now thinking what’s a record player – grrr). These were the portable ones with a lid and a carry handle and it went everywhere with me. I used to plunder mom and dad’s record collection, and loved ‘From me to you’, ‘Hello Goodbye’ and ‘Get Back’ on that instantly recognisable Apple record label. For me, The Beatles are the standard that all other bands aspire to, their music is what the word ‘classic’ was invented for.

And that may be why I was so utterly excited to get the chance to see ‘Let it Be‘ the smash hit theatrical concert that is dedicated to recreating those classic Fab Four moments. This is a truly fabulous theatre experience, one which starts the minute you enter the auditorium. Vintage style television screens, both centre stage and in the corners of the theatre, set the scene, showing classic 60s television clips and advertisements. By the time the concert starts, you have been transported back in time to the early days at The Cavern. 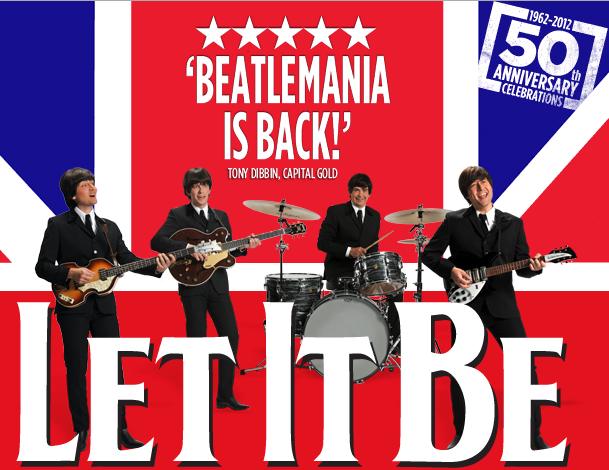 But make no mistake, this is not a play, or a cheesy musical with Beatles hits added to tenuous links, this is a concert, pure and simple, with sublime hit after sublime hit. Performed by Ben Cullingworth, James Fox, John Brosnan and Reuven Gershon, ‘Let it Be’ takes the audience from those early days in the Cavern, to ‘She Loves you’ at the London Palladium, (with that infamous ‘Rattle your jewellery’ quote thrown in for good measure by the Reuven Gershon – earily uncanny as John Lennon) right up to the 1970 final (American) single ‘The Long and Winding Road’, the fabulous songs just keep coming. I loved the Shea Stadium segment, complete with a backdrop that showed all those screaming fans. ‘Daytripper’, ‘Drive my car’, ‘Ticket to Ride’ – all the hits were there, and they all sounded fabulous. Mention too has to be given to the costume changes – these added to the nostalgia trip and the general feeling that this is the closest you could now come to seeing The Beatles.

The first half ended  the groundbreaking Sergeant Pepper, and the majestic ‘A Day in the Life’ , a song that has always sent shivers down my spine, and did so once again.

The second half saw less costume changes as we entered the difficult period post Brian Epstein. This section had some definite highlights – a beautiful ‘In my Life’ from John, a lovely acoustic tinged ‘Blackbird’, and another sublime piece of music in George’s ‘While my guitar gently Weeps’, a song that shows the genius of the ‘Quiet Beatle’. The segment and show ended with the touching ‘Let it Be’, the audience had their arms in the air and sang every word to one of The Beatles most loved tunes.

But it couldn’t really end there – and as the audience shouted more, the Fab Four responded in the only way possible – an almighty sing-along to ‘Hey Jude’. With this perfect ending, it really was time for goodbye – but what a fabulous night everyone had experienced.

Let it Be is currently on a UK Tour, and is at Birmingham’s New Alexandra Theatre until Saturday 22nd March. Click here for ticket information.