You know when Santa is starting to pack up the sleigh when Panto season begins, and last night the Wolverhampton Grand got the season off to a flying start with a wonderfully funny version of Aladdin, starring a host of hilarious stars and absolutely delighting the audience with its sheer fun and exuberance. It is, quite frankly, the best Wolverhampton Grand panto in years and I enjoyed every single minute of it.

All the key elements were in place with X Factor winner Joe McElderry showing off the amazing vocal talent that made him such a runaway winner. He is well matched with his beautiful princess, Britain’s got Talent’s Lucy Kay, and their vocal skills and winning personalities make them enchanting romantic leads. I often think that these roles are quite thankless in comparison to the showy comic roles, but Joe and Lucy handle them with charm and style. 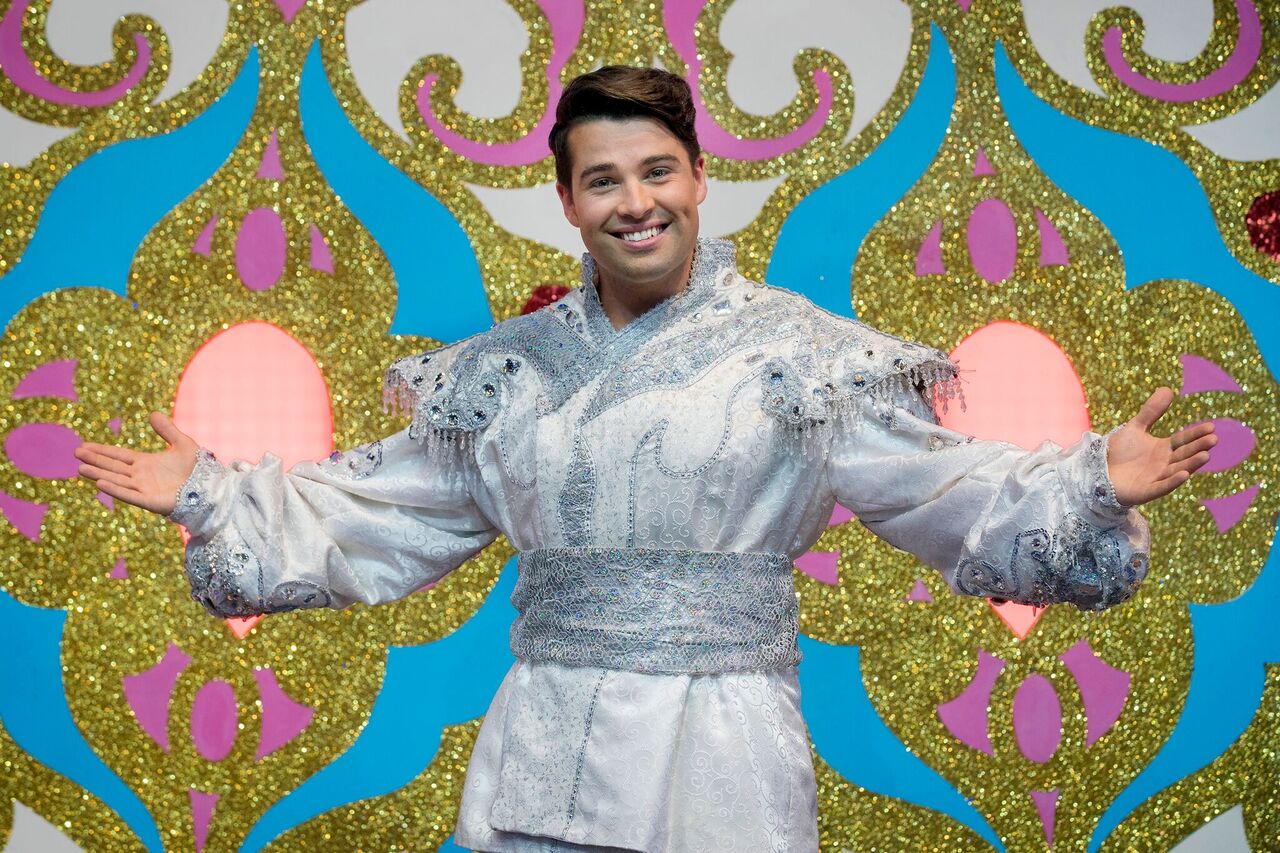 But of course, panto is all about those comic elements, the men dressed as women, the silly sidekick, and, in this case, the Queen, played by the first woman to be diagnosed with ‘lazy Cow Syndrome’. Because, yes, Doreen Tipton was back in town, stealing every single scene she appeared in with her stories of the job centre, disability allowance, and her daughter’s, Trojan, Tangerine and Trollop! She is hilarious, side splittingly funny, and although her jokes probably went over the head of the children in the room, the adults were in stitches.

Matching her in the comic stakes is Wishy Washy, played with amazing energy by the brilliant Adam Booth. He is the kids favourite and displays the sort of slapstick comedy you now only see in panto. Ian Adams is a perfect panto dame, quick witted with brilliant asides and wearing those hysterical costumes which seemed to get wilder and wilder as the show goes on. Lisa Riley makes a sassy, feisty slave of the ring, and even got to show off the brilliant dance skills that made her such a success in Strictly Come Dancing. She also has a fantastic fun chemistry with Neal Wright, a very cool genie of the lamp. 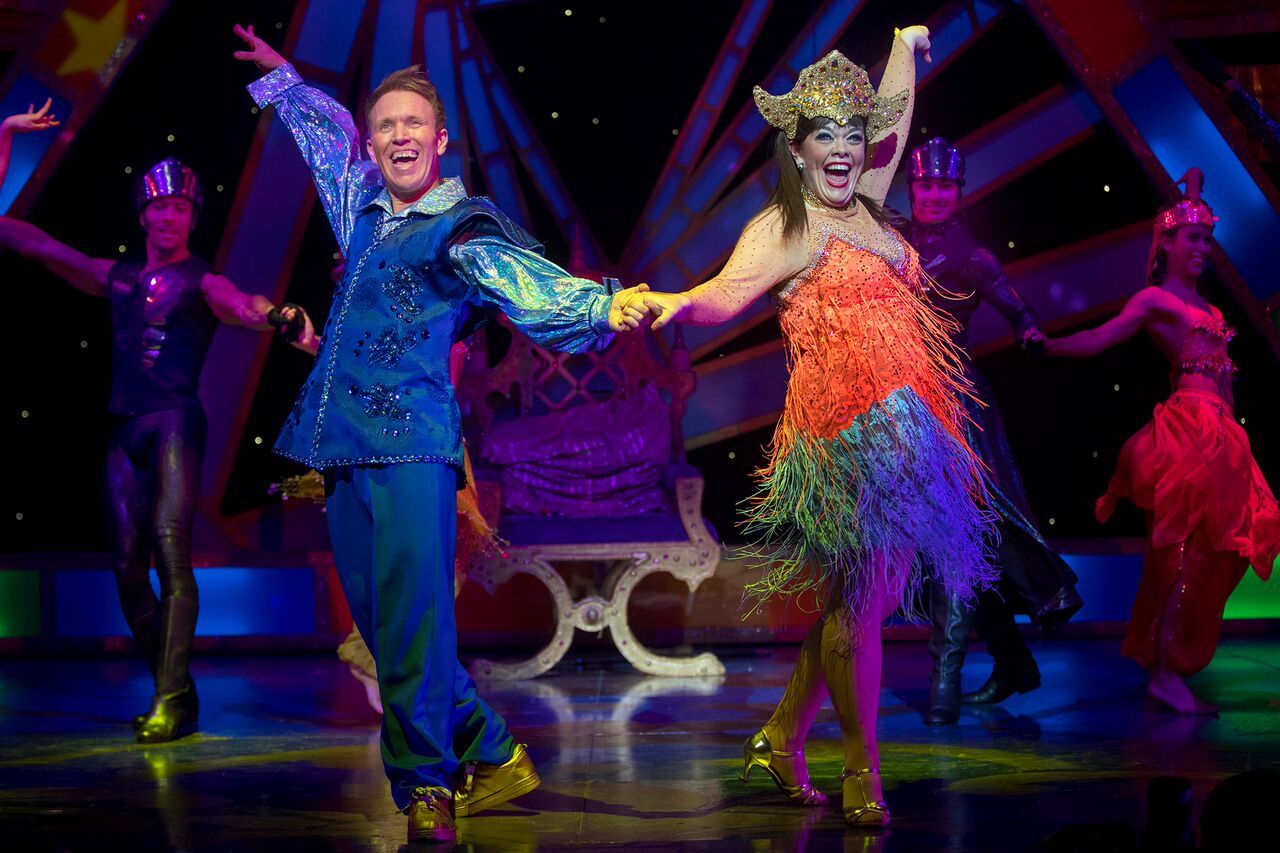 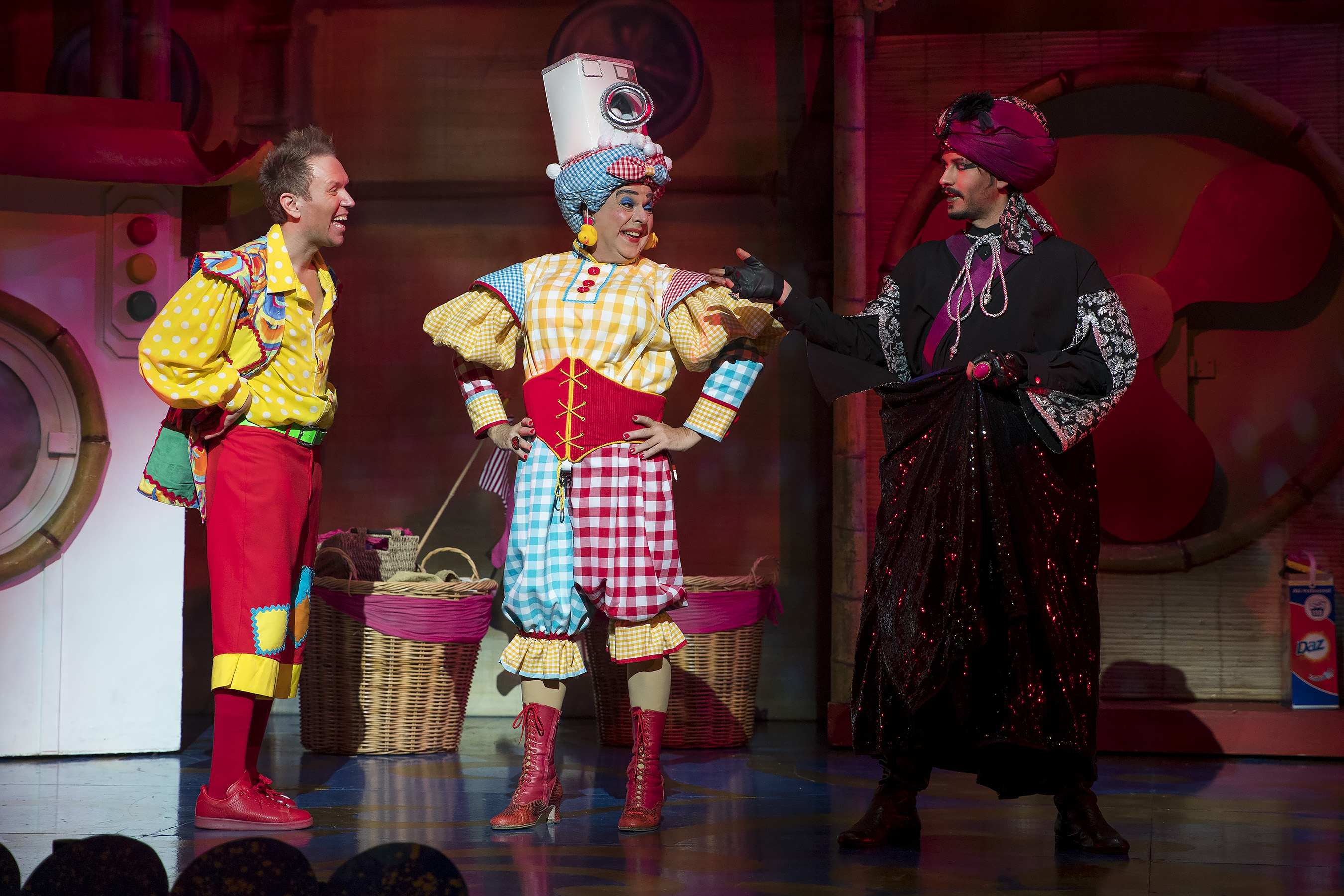 Every panto needs a baddie, and Abanazar , played by Stefan Pejic, is a real nasty piece of work, with great stage presence and dark humour. Rounding out the impressive cast, children’s TV favourite Ben Faulks, aka Mr Bloom, played PC Ping Pong and proved himself to be a panto natural, especially in the showcase song which he performs with Lisa Riley, Adam Booth and Ian Adams which descends into the best sort of farce – pure mayhem. 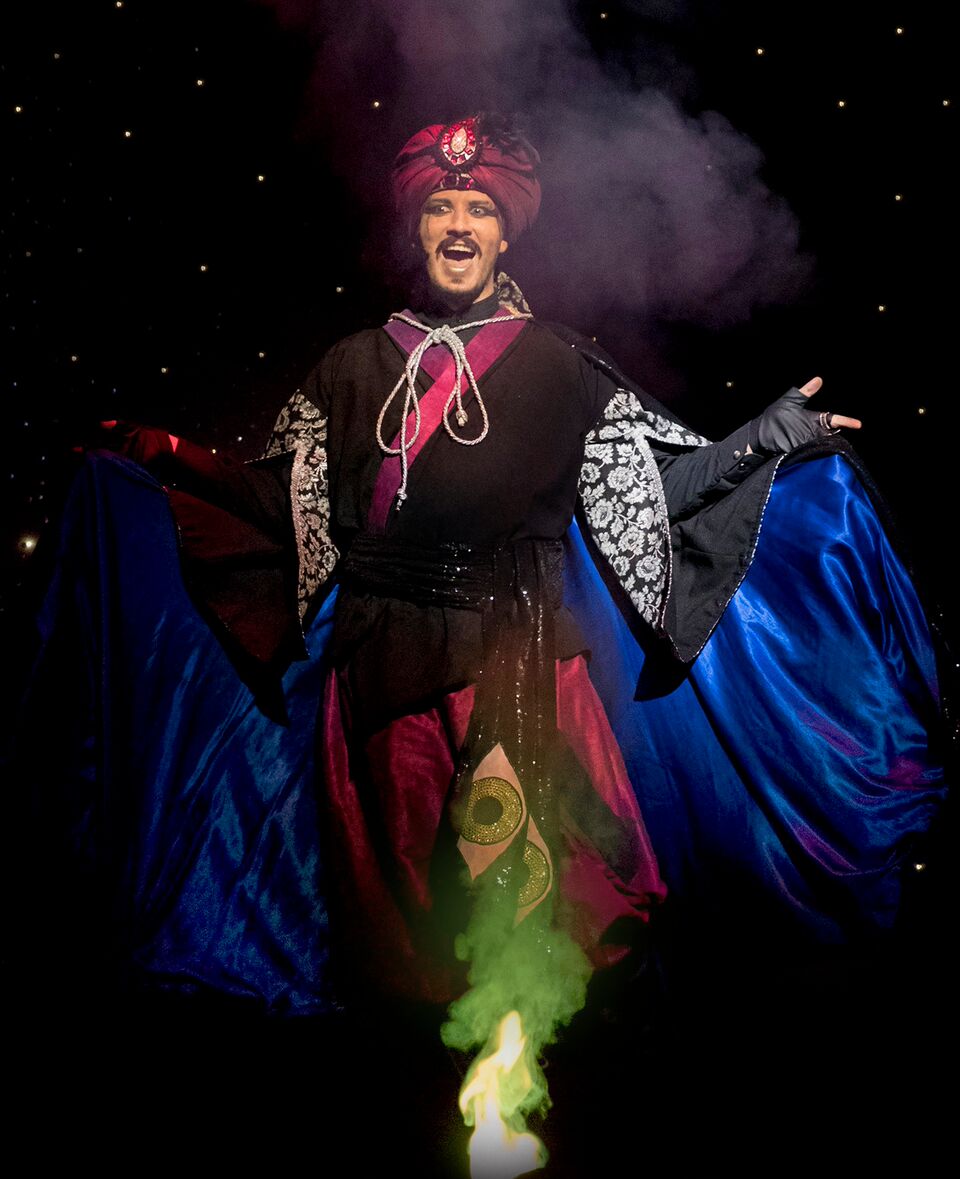 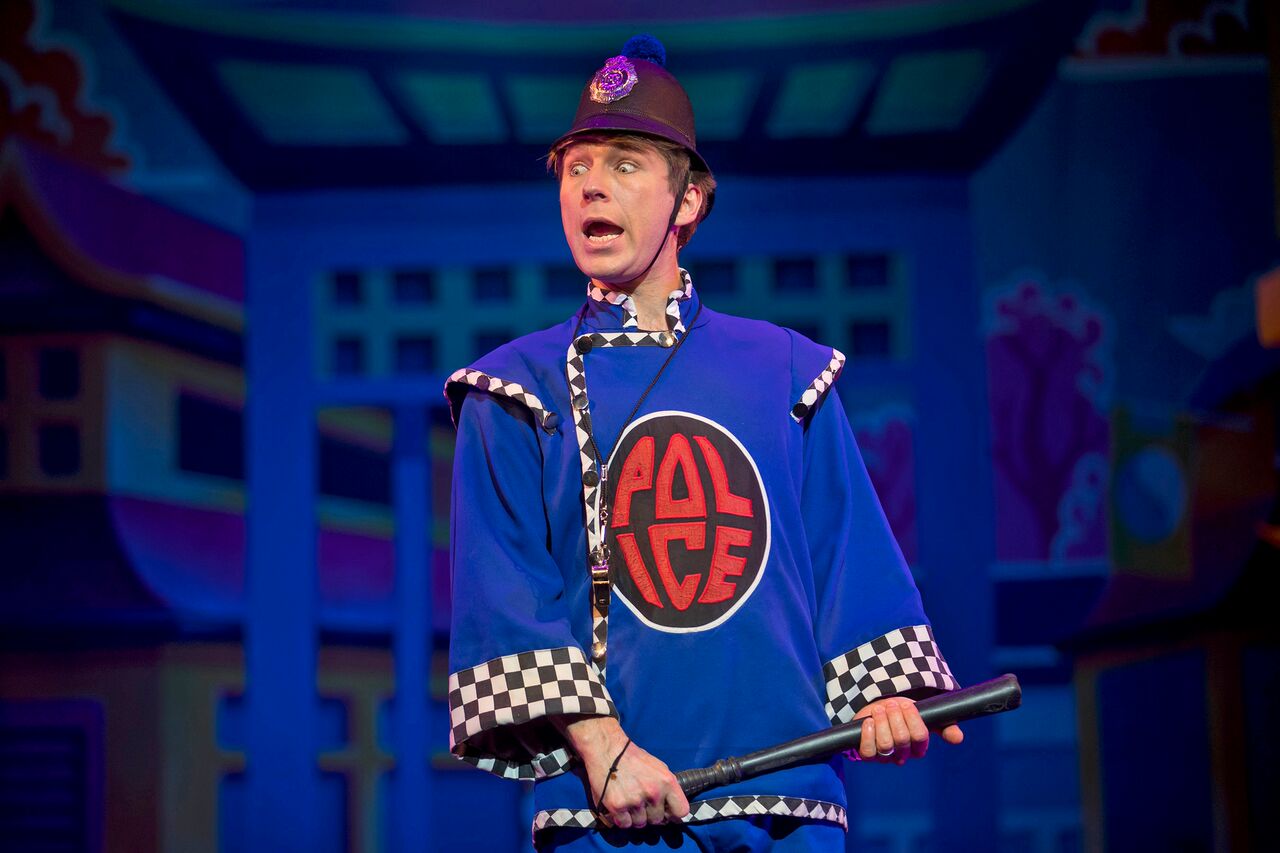 With glorious songs, a wonderful elephant and a magical flight on a magic carpet, this is truly entertainment for the whole family. As I said before, I loved every single minute of it.