It’s been around for a few years now, but for many, ethical fashion is a bit like the gym – you know it’s a good thing, but you don’t necessarily go there! Images of hippies wearing tie dye and smelling of joss – sticks were so prevalent that fashionistas saw ethical fashion as a thanks – but no thanks moment. No amount of moral feeling was worth that amount of hemp.

But things may be changing, and in future years, people may point to February 2011 as the turning point. The month in which ethical fashion made headway, headlines, and with the new fair trade, fair mined hallmark, made history.

Not yet convinced? Then let’s look a little closer at some of the evidence. This month sees the launch of Emma Watson’s final collection for ‘People Tree’. Emma is a much admired style icon by anyones standards, but one who strongly supports ethical fashion. Her collections for People Tree have been important because she fundamentally understands that in order to succeed, ethical fashion needs to be stylish and wearable. Her collection has both style and wearability in spades. A range of cute silk mini dresses in polka dot and check prints are young and fresh, whilst a picture of Emma posing in front of a huge motorbike is sure to appeal to the young audience it is targeting. Of the collection, which goes on sale on February 28th, the actress says ‘    we took care to design a really wearable collection that truly celebrates the traditional skills of People Tree’s fair trade groups around the world.’ 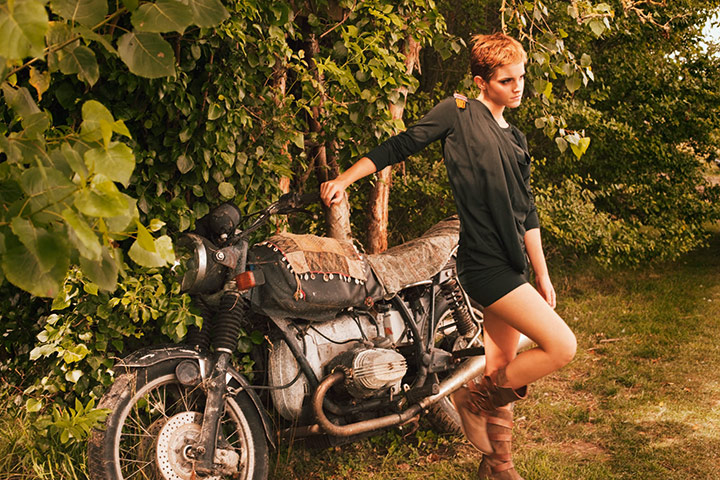 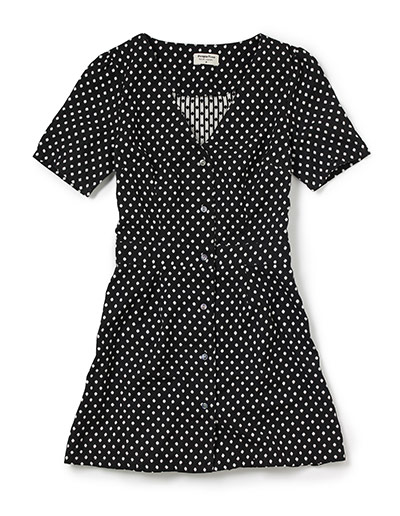 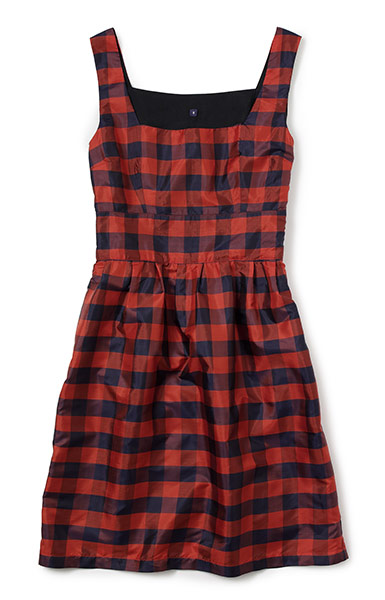 Emma Watson is just one of a new breed of fashionistas who genuinely believe that our luxury items shouldn’t come at the detriment of other people, nor should they cost the planet. Livia Firth, the totally gorgeous wife of actor Colin Firth has seen her style profile on the rise due to the acclaim, and numerous award nominations Colin has received for his film ‘The King’s Speech’. This will come to a grand finale this month with the Oscars, where Colin is favourite to pick up the best actor award. But Livia is no ordinary style icon. A talented film producer, Livia is the creative director of ECO AGE, a one stop shop for stylish environmental products. Liv also collaborates with Lucy Siegle for Vogue.co.uk’s Green Carpet Challenge, which showcases ethical red carpet looks. This awards season she has been busier than ever, with her own looks being put forward for scrutiny. She has quite frankly, hit the ball out of the park, looking amazing at all the awards ceremonies. My particular favourite was her look at the Critics Choice awards, where she wore  a black Nina Skarra Peace Silk dress, with a necklace she designed herself for the ethical brand MADE. On the hunt for the perfect Oscar gown, Livia is guaranteed to look stylish, elegant and unique amongst all the froth on the red carpet. 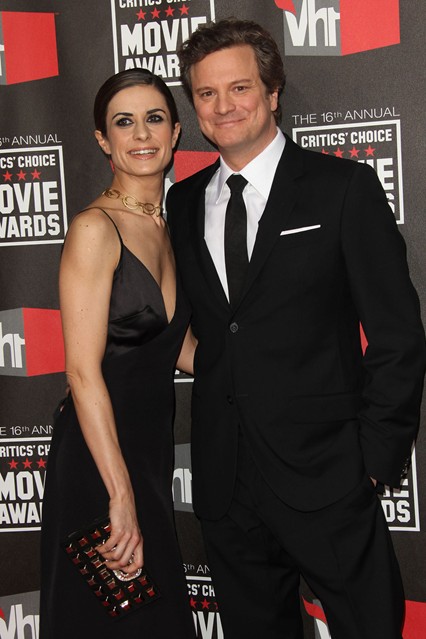 Ethical fashion is benefitting from the support and patronage of such stylish women as Emma Watson and Livia Firth, but it also needs the heavyweights of fashion if it is going to become mainstream. Step forward Vivienne Westwood. The high priestess of style has shown her support of  fair trade and ethical fashion in her support of two major movements. She has designed a range of fabulous tote bags for the Ethical Fashion Africa project. These are limited edition, and have been handcrafted by artisans in Nairobi using recycled materials. In addition to this, Vivienne has designed the official t-shirt for this years Comic Relief – Red Nose Day. This is made in Africa from 100% fair trade cotton, and has the backing of a stylish ad campaign featuring fashion icons like Sienna Miller, Nicola Roberts and Helena Christenson. 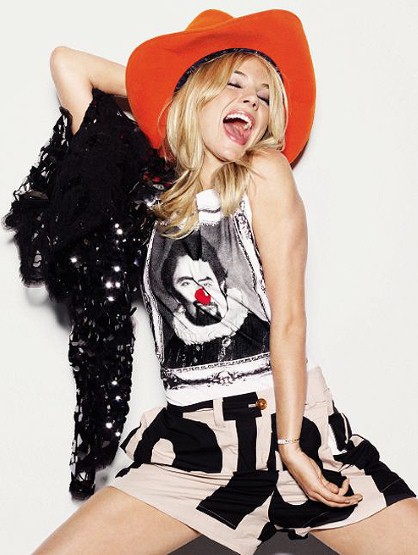 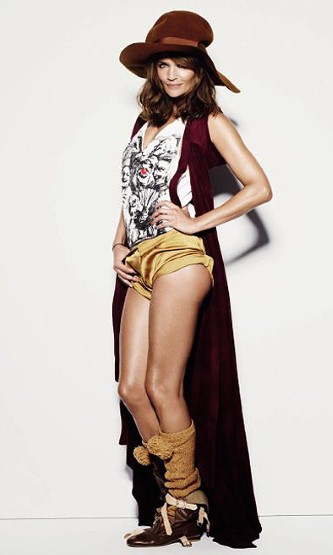 New ethical heroes are emerging too. LIV is a new ethical  fashion/knitwear collection that has been launched by knitwear designer Dawn Foxall. Using knitted organic cotton, this collection is full of soft and luxurious pieces that have the feel of cashmere, but are totally environmentally friendly. I love this tie neck jumper from the collection. Liv is an affordable collection, with prices ranging from £35 to £110. (www.liv-uk.com) 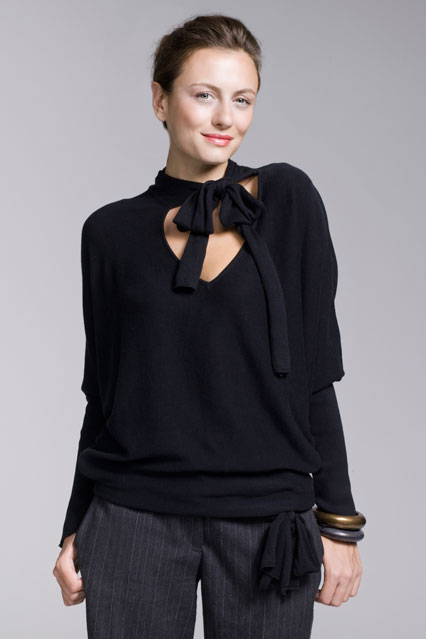 Perhaps the most important move will be the introduction of the Fair trade and Fair mined gold standards that will come into operation on Valentines day. Consumers will now be able to track the origins of any gold items carrying this standard. In order to achieve the standard, safe and responsible practices in recovery of the gold must’ve been adopted, particularly in the use of toxic chemicals. In addition, if you buy gold that has been fair traded and fair mined, you will know that the miners have at least achieved the fair trade guaranteed minimum price for that gold, rather than the exploitative bare minimum paid to many miners who work in what has often been described as one of the dirtiest industries on the planet.

These moves towards ethical fashion are significant. They show that ethical fashion can be stylish and stand on its own merits, that our new style icons can be ethically and environmentally conscious, yet still shine on the red carpet and that we can enjoy shopping without a guilty conscience. February 2011 may yet be the month when fashion found its conscience. To discuss this in further detail, I turned to an expert. Kate Carter is the life and style editor for The Guardian, and is also a total ethical heroine. A highly respected journalist, writer of the Guardian’s witty ‘Fashion Statement’, Kate is talented, irreverent and a total smack in the face to those who believe that strong ethical views can’t be kept company by a sense of humour. I asked Kate a few questions regarding ethical fashion. Her answers make for interesting reading.

I feel I ought to have a story here about visiting a sweatshop in Bangladesh and having a life changing experience, but I actually can’t really remember! I think it was through discovering People Tree and Howies – both ethical fashion companies – and learning more about what they did, and why they did it. It was before I was in journalism, at any rate, so more years ago than I care to remember.

2. What would you say to address those who still believe ethical means hemp and tie dye?

I’d tell them they are desperately unfashionable 😉 Seriously, I know that a lot of people do still have that perception, but that they should just look at the amazing companies now producing incredibly luxe and stylish clothes, from red carpet-worthy vegan shoes at Beyond Skin to too-cool-for-school Edun. I’d tell them to go and look at fashion-conscience.com for some trend-led ethical fashion. Then I’d make them go and google Livia Firth (hits the red carpet with husband Colin, wearing only sustainable chic, then blogs about it for Vogue) or Natalie Portman (vegan, so won’t wear animal products) or Summer Rayne Oakes (former model turned eco entrepreneur)

3. Who are your ethical style icons?

Definitely Livia Firth. Glamorous but grown up. To the Paris premiere of The King’s Speech she wore a dress made by Junky Styling, recycled from an old moth-eaten suit of Colins. Fantastic!

4. Do you worry that ethical fashion could be a trend, rather like models going naked rather than wearing fur?

I do worry that the recession will bite it harder than other areas, but I don’t think it’s going anywhere. Those models who swore they would rather go naked than wear fur, then a few seasons later were advertising it  … well let’s just say models aren’t paid for what’s in their heads. Fortunately the driving forces behind ethical fashion – in the UK, people like Orsola di Castro (who runs From Somewhere, an upcycling fashion label, and co-curates Estethica at London fashion week) and Safia Minney (founder of People Tree) are committed, intelligent, and not prepared to back down!

5. Do you think mainstream fashion magazines could do more to promote ethical fashion and jewellery?

Yes, definitely. But I don’t think they should do it “separately” – ethical fashion and jewellery has to stand on its own merits or it will never really hit the mainstream. It needs to be gorgeous, desirable, well made. The problem for many of these companies is that they are run on a wing and a prayer, and can’t afford to hire big PR companies to get their message and their product on the desk of glossy magazine editors. So unless you are immersed in the world anyway, it’s easy just to overlook them. Personally I think magazines should do more to search out new companies with decent ethics. Even if they don’t pay for big adverts in the magazine 😉

My thanks to Kate for taking the time to answer my questions.