A famous, successful writer now suffering from writer’s block, a young student who has written the perfect play and a wife who is worried that her husband is about to turn killer. This is the exciting premise of Ira Levin’s Deathtrap, which opened at Birmingham’s New Alex Theatre last night. It was a deliciously chilliing night of theatre, with shocks and jumps galore, and enough twists and turns to keep the audience constantly on the edge of its seat. I loved it. 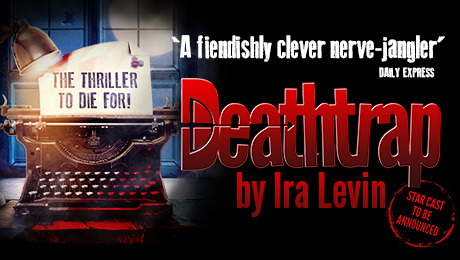 Sidney Bruhl is a successful writer who is now struggling to write a new play after the failure of his last effort. Married to the supportive Myra in a seemingly happy union, he receives a play through the post from an ex student who attended one of his seminars. The play is Deathtrap, and Sidney believes it to be perfect, and wishes aloud that he had wrote it as it is likely to be a big hit. When he finds that there are only two copies of the play, and that he already has one of them in his hands, he invites the student, Clifford Anderson, to his remote home to ‘work on the play’, but really has murder in mind. But who’s murder? The issue is made all the murkier by his neighbour, Helga ten Dorp, a famed clairvoyent with very strong extra sensory perception, especially when she enters the Bruhl’s house, where she has a strong sense of death. Deathtrap twists in one direction, and then another, as cross and double cross, surprising revelations and shocks galore lead to a satisfyingly macabre conclusion. 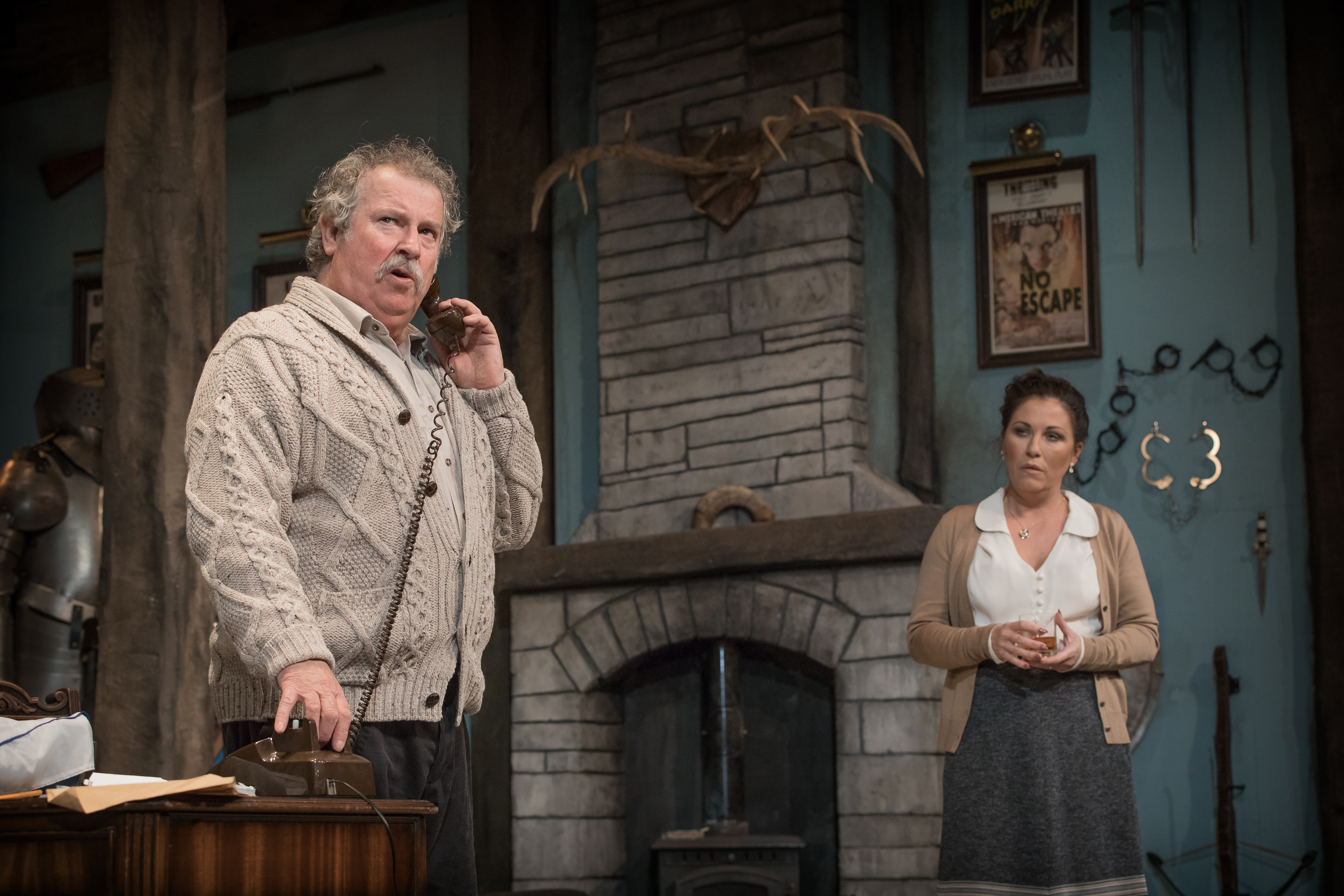 Deathtrap is made up of a cast of just five characters, and the ensemble cast in this version is brilliant. The Eastenders contigent of Paul Bradley (Sidney) and Jessie Wallace (Myra) have a fabulous chemistry that rings true as a married couple. Paul plays Sidney as a man who is deceptively cheery, amiable man who has an edge, when he loses his temper you can see that he could be capable of acts of violent. it is a great performance of someone who could turn on a pin. Jessie Wallace shows her range playing Myra, she is a world away from brassy Kat Slater, starting out the play with understated calmness, but becoming more frantic and then terrified as she faces the fact her husband could be a murderer. Only at the end of the terrible events of Act 1 does she show another side of her character, another surprising twist in a tale full of them. 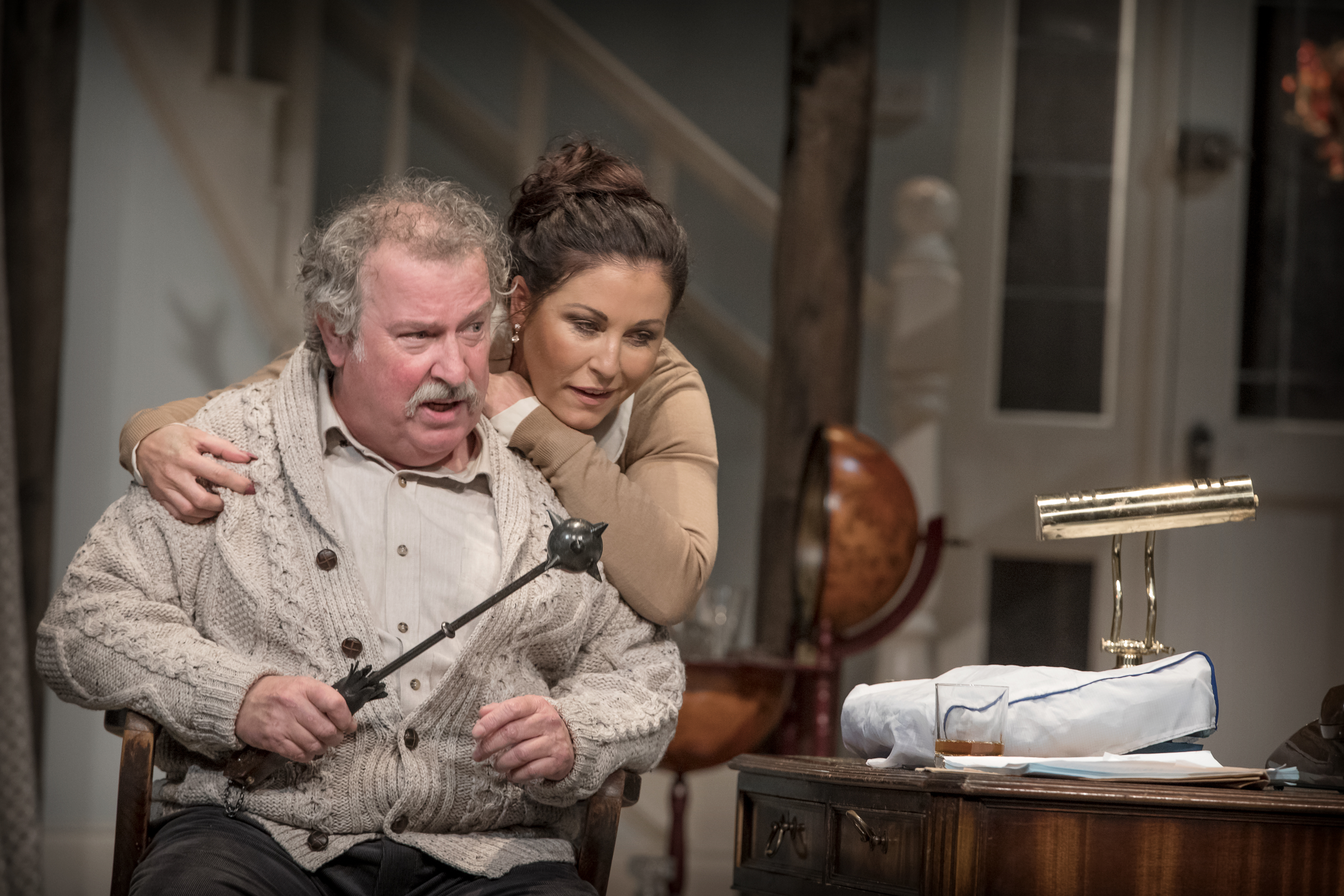 Sam Phillips is also very good as Clifford Anderson, playing the character with idealised charm and innocence, until he is revealed to be anything but. Beverly Klein is hilarious as Helga ten Dorp, divinely overacting her ESP, and given all the best one liners that she delivers with perfect comic timing. The cast is round out by Porter Milgrim as the lawyer Julien Ball, who proves to be another character who has more facets than you immediately sense.

Deathtrap all takes place in one room, but the set never feels claustrophobic. This is due in no small part to the excerpts of classic movies that break up the scenes, and are a clue to what is really going on – a really clever device to move the action along.

Deathtrap is clever, cunning and utterly calculating. All this makes it a devilishly good night of theatre. Go See.