Denis O’Regan is a rock legend. The tour photographer on some of the key tours in music since the 1980s, this week Denis was in Birmingham to launch his new coffee table book, ‘Careless Memories‘, which chronicles his time on the road with Duran Duran on their Sing Blue Silver tour in 1984. The book is also accompanied by a wonderful exhibition of his Duran Duran tour photographs at Birmingham’s Malmaison, which starts on April 23rd.

I was lucky enough to have a chat with Denis at Malmaison, where we talked about the book, exhibition, and all things Duran Duran (and, as a Duranie, please allow me a swoon at this moment.) I also got a sneaky look at the exhibition as it was being hung – quite a moment. 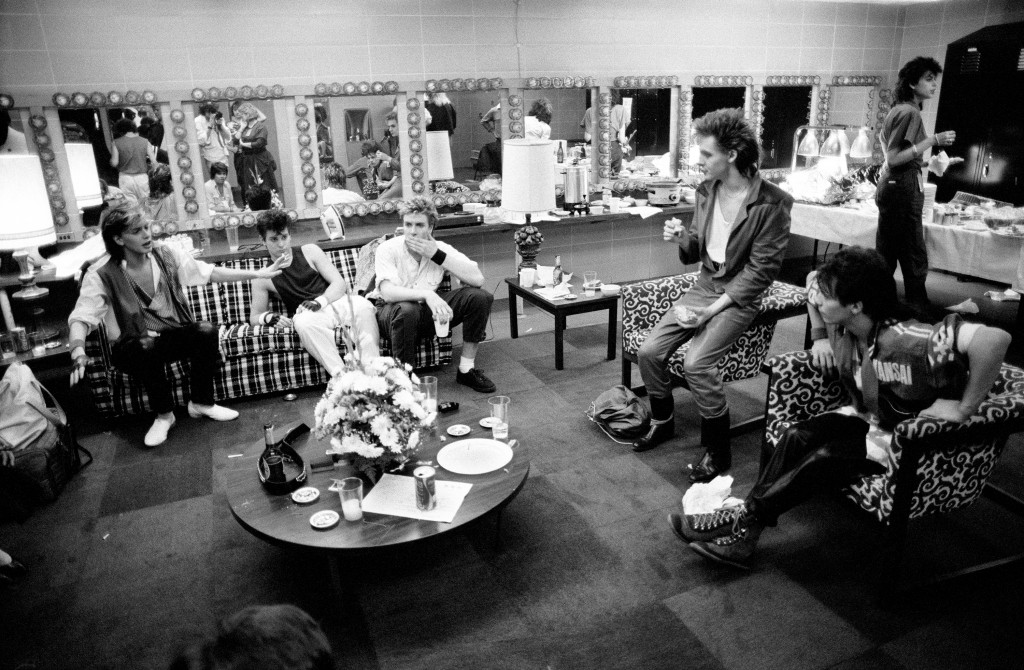 Fashion-Mommy: Can you set the scene for Careless Memories?

Denis O’ Regan: Careless Memories is a high end, coffee table book covering the Sing Blue Silver tour of Japan, America and Canada. Seven and the Ragged Tiger had been released just before the tour, and in the middle of the tour The Reflex was released and went to number one in America. The band became huge, this was exactly 20 years after Beatlemania had hit and the band were christened the Fab Five by the American press. It was also the beginning of the MTV era and Duran Duran were one of the first video bands – both press and fans went crazy for them.

FM: The story starts in 1984 when you joined the Sing Blue Silver tour – what had been your rock background before then?

DO: Well, the previous year to this tour I had toured with David Bowie on his Serious Moonlight tour in Europe, and before that I had also toured with the Rolling Stones on their Tattoo You European tour, so I had experience of the rock tour.

DO: Incredible. Of course, none of us knew that this was going to be the pinnacle at the time.It was just an incredible time. I was a Beatles fan when I was younger but was too young to have experienced Beatlemania, but this felt like something similar. It was 5 star hotels and private jets and huge crowds and audiences all the way. 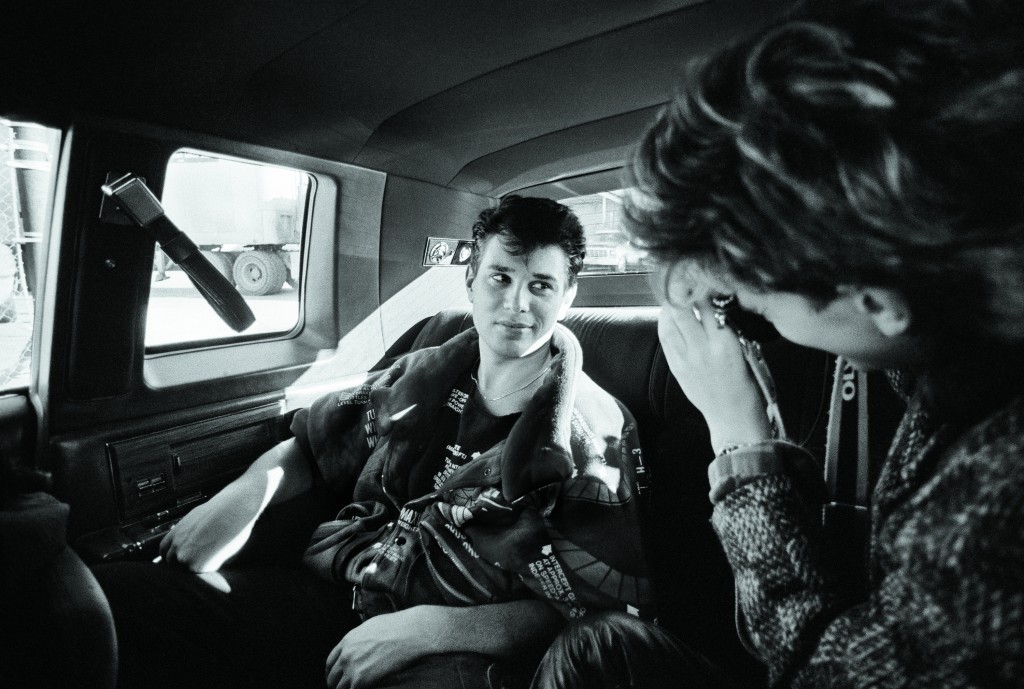 FM: You followed the band to Japan, North America and Europe, where were the fans the worst/most hysterical?

DO: The UK tour came before Japan and America, and at the end of that there was a press tour of Italy. It was completely crazy, everywhere the band went they were followed by hoards of fans on their little mopeds. It was hysteria. But of course the band should’ve gone onto bigger stadium tours in North America as they were huge there. Maybe it was a direct result of the pressure, but it never happened. There were the splinter projects, and then Simon almost died on Drum which made the band ask a lot of questions. It also caused friction with the management as one manager had suggested and encouraged the Drum trip. So the big stadiums they could’ve played in the USA never happened. 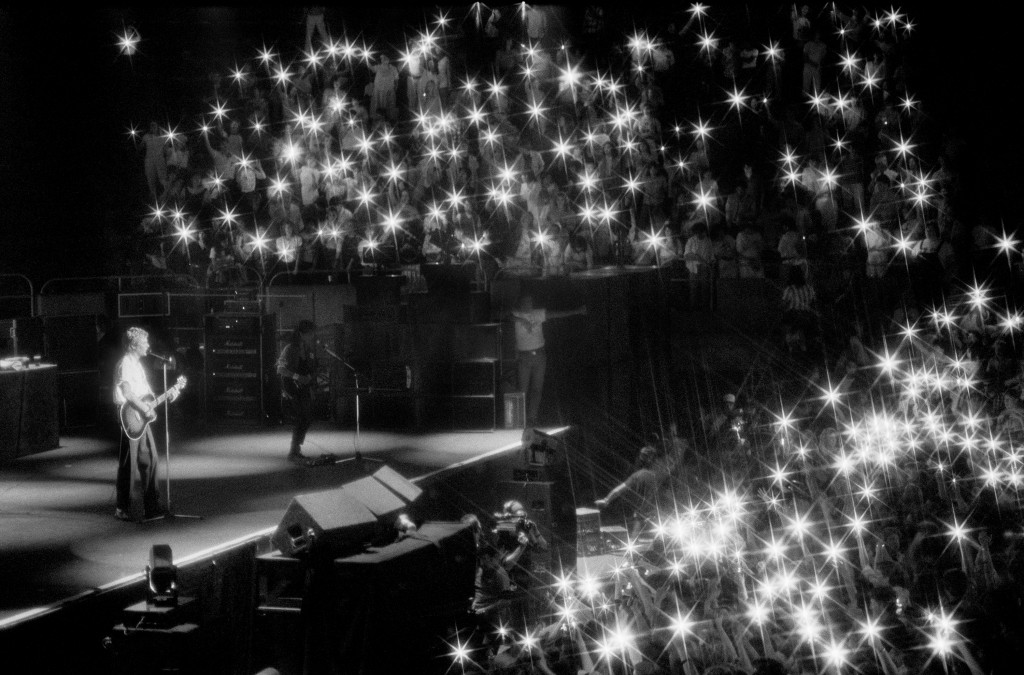 FM:You say you clicked with the band pretty early on – why do you think that was?

DO: I was used to being around famous people and when I first started to photograph Duran they were bigger in Europe. At that time most UK music press was black and white, but Europe had colour magazines which were great to showcase New Romantic bands, so these sorts of bands were attractive to the Euro press. I shot the band quite a few times for European publications, and then started to bump into them socially and we got friendly. Plus I had shot their hero David Bowie, and also punk which the band were also into, so all this helped.

FM: Which member of the band do you think you got on with best?

DO: John Taylor. We just clicked the first time I shot them. They weren’t that big at the time, I think they were supporting Hazel O Connor, and I was shooting them for the NME. John just came over and started talking about different images I had taken of bands that he liked and had remembered. We remain big friends and still meet up. My nearest neighbour now is Simon, and on the tours I went out most with Andy to party. So lots of different relationships. 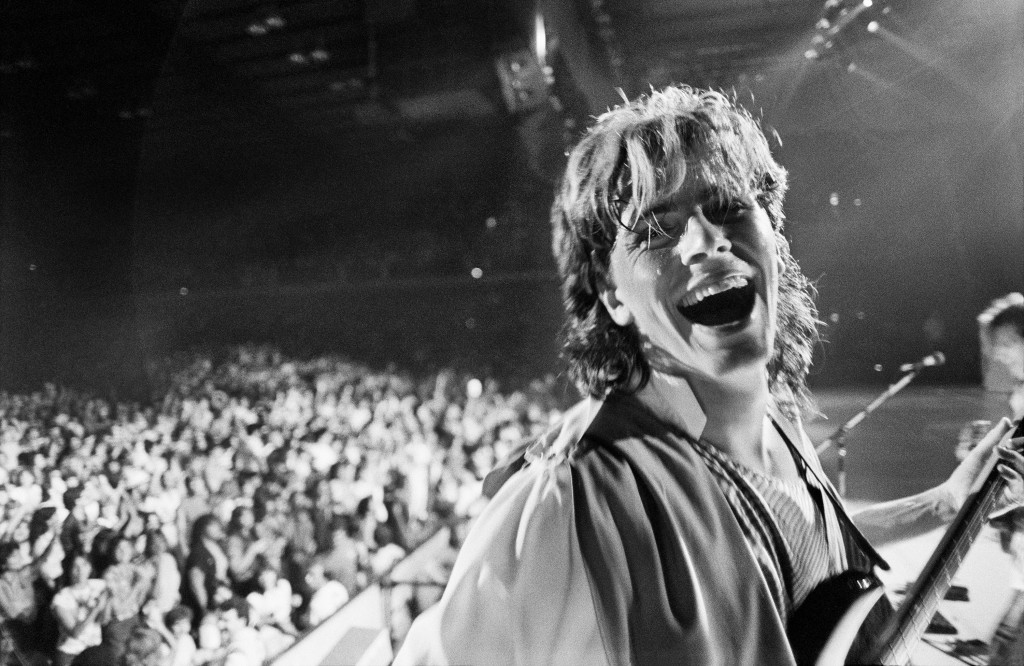 FM: Nick Rhodes talks about the ‘constant humour we survived on’. What did he mean by that?

DO: A tour is a really pressurised environment, especially with the extent of adulation Duran Duran was experiencing. You just have to have fun sometimes, but still need to look after the things that need doing, but there was still a lot of sitting around and laughing.

FM: You describe yourself as a ‘packrat’ what do you mean by that?

DO: I just hung onto everything. Rooming lists, tour itineraries, phone numbers for rooms from the days before mobile phones, even the pseudonyms that band members had to use in the days when they certainly couldn’t use their own names. I remember on the Rolling Stones tour Keith Richards often used the name Dr Ugs as his pseudonym – spelling drugs! I just decided I could put this stuff into a really special book.

FM: You talk about laughing a lot, but what about the downside – the downtime?

DO: For me personally it was the soundchecks. Sometimes you would be literally flying in that morning, and all you would really like to do is get to the hotel room and sleep, or have a meal. Instead it could be right to the venue for a soundcheck – no chill time, no sleep time, and a lot of hanging around. Sometimes it was made worse if, after the show, you were literally flying back out again to the next venue. Charlie Watts once said when asked about 40 years of the Rolling Stones that is was 8 years playing, 32 years hanging around – that’s so true.

FM: Heading back to Careless Memories, how do you feel about giving away some of your own personal memorobilia with the special editions?

DO: Good question. I’m giving up some of it, but hanging onto some, so may put it in a book for myself and my son. Simon Le Bon said he wants a copy to show his children that he does actually work, and if you look at the images in the book they do show the band working, hardly any images are just off duty enjoying themselves.

FM: Do you have a fave memory from the tour?

DO: My fave moments are usually during shows, you can get a certain vibe from the audience. It could be a certain song where the audience just erupts – I just love those moments. It is the combined sense of community that you just don’t get anywhere else. But there were some great moments. The American tour mostly took place during Winter, it was terrible conditions, going from strange place to strange place. They played New York in 10ft snow drifts, but then moved onto Florida and it was 80 degrees heat. That was a nice moment, you can see that from the pictures in the book. But then it was back to snowy Detroit or wherever. There was also great moments with people who turned up on the tour, like Andy Warhol who turned up unexpectedly. 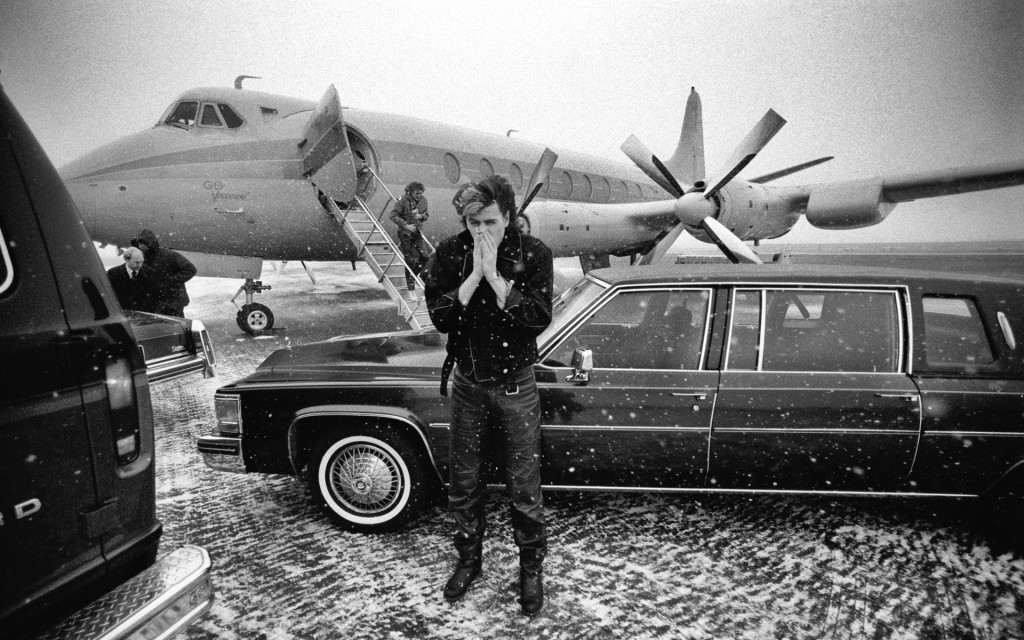 FM: The band seem to love the book, that must mean a lot?

DO: They were involved. Nick was heavily involved, and they provided extras and made a video etc. I think they are pleased, it’s part of their legacy and sums up a moment in their lives.

FM: You’ve chosen Malmaison for the launch and exhibition – why Mal?

DO:We actually approached Mal – we thought they were a cool brand and we wanted a brand that we thought fitted the ethos of the book. Malmaison is a luxury brand and this is a luxury product so it fits together so well. We also wanted a hotel that we could visit in other UK cities like Manchester and Leeds as we continue the tour. It’s a good fit.

FM: Do you have a fave Duran Duran track?

DO: I love Hungry Like a Wolf. It’s a rock song and I remember them saying the riff was inspired by Marc Bolan and T-Rex ‘Get it on’. I also love New Religion. Careless Memory is not so well known but it is a great title for the book – the perfect title. I think it’s great we can use the name of a song.

FM: And finally, you’ve worked with some of musics best – from the Rolling Stones, David Bowie, Pink Floyd and Queen, right up to Coachella – how does your time with Duran Duran rate?

DO: Well, each of the tours was great for different reasons. The Stones was my first big tour, David Bowie was someone who I think is just amazing. Duran Duran were not a band I’d grown up with, but it was like experiencing Beatlemania with all the hysteria. All the tours were so great for different reasons, because Duran Duran were younger, it felt like we were all in it together. They didn’t know they would become so big on that tour. The press and fans just went mad. 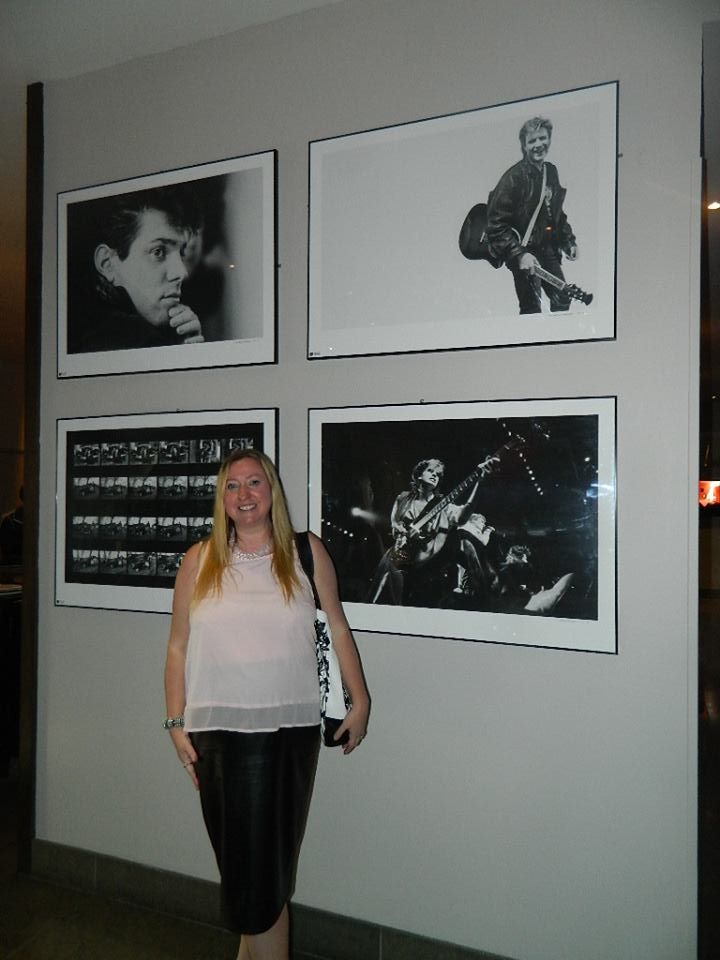 A sneak preview of the amazing exhibition 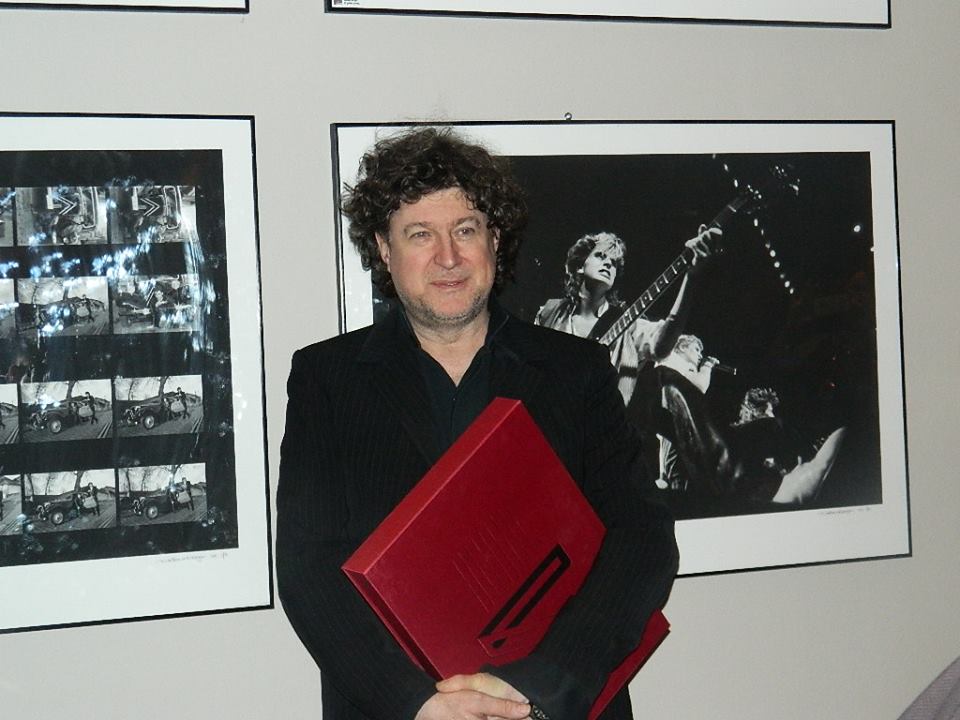 *With thanks to Denis O’Regan for his time and memories, and Tara Tomes from East Village and Lisa Smith from Prepared PR.