It is now four months since the Royal Wedding, but there are no signs of any abatement in fashion’s interest in what Pippa Middleton wears. Whether taking a night out with boyfriend Alex Loudon, or just enjoying a shopping trip on her beloved Kings Road, or even on her way to work, Pippa is simply one of the world’s most photographed and talked about women. In the last few weeks, she has been subject to the dreaded ‘who wore it best’ polls after Lindsey Lohan was pictured in a white version of her Alice Temperley wedding reception dress. The, just last week, she was photographed wearing a stunning trenchcoat from the Italian designer Fay, with Kylie Minogue pictured wearing it the next day.That battle seems to have been labelled a draw, and is rather amusing, since it could be seen as a battle of the pert behinds! 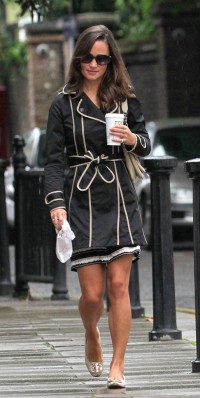 I personally loved this coat, but this look doesn’t come cheaply. The Mac is called ‘Metroplitan Glamour‘ and is from Fay’s 2011 Spring/Sumer collection. It carries a heavy-sigh inducing price tag of £800. Pippa accessorised with a RI2K handbag and Russell and Bromley flatties. As usual, the look was effortlessly chic. Pippa had previously shown her  love of a good macintosh when she was pictured out and about on a typical drizzly day in a belted grey trench that is reminiscent of the styles worn by Audrey Hepburn in the 1960s. 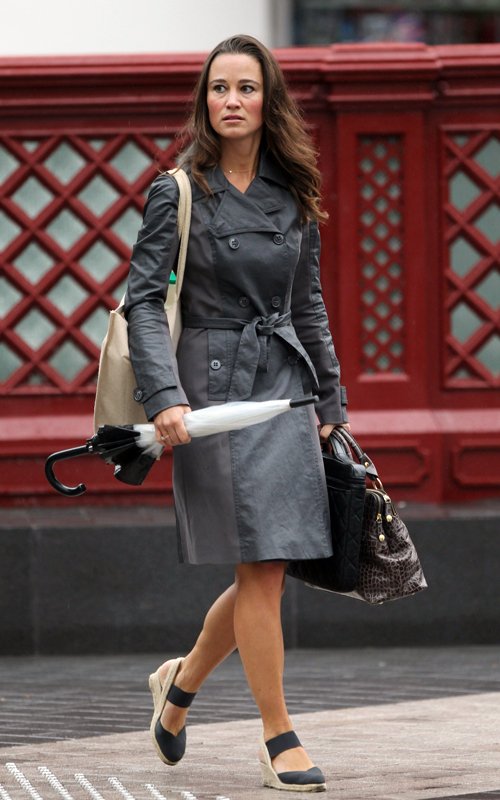 This look is just one of a whole range of amazing styles that Pippa has worn during the last days of summer. A pretty peach maxi dress was a rather surprising look for a women who usually reveals a bit of leg, but it was both floaty and flattering, and felt like Pippa’s last hurrah to Summer. 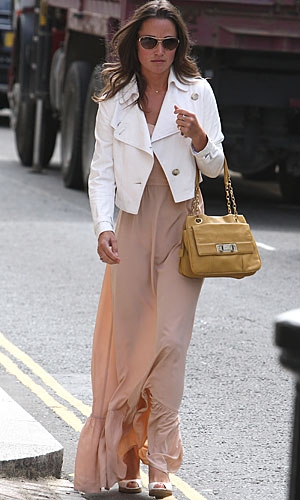 Pippa has also shown that black can be worn as a summer staple as it looks amazing against a suntan. I love this all black outfit that is brightened by just a hint of white piping on the jacket.

Pippa has also continued to fly the flag for British Fashion. Last week she was pictured  enjoying a night out with her beau Alex Loudon wearing a great grey leather jacket by Sara Berman. I love the studded cuffs on this jacket that make it perfect for throwing on after a night out.  The outfit underneath shows that Pippa understands how to utilise her wardrobe to make it day-to-night desirable, having been photographed wearing this outfit  on her way to work previously. 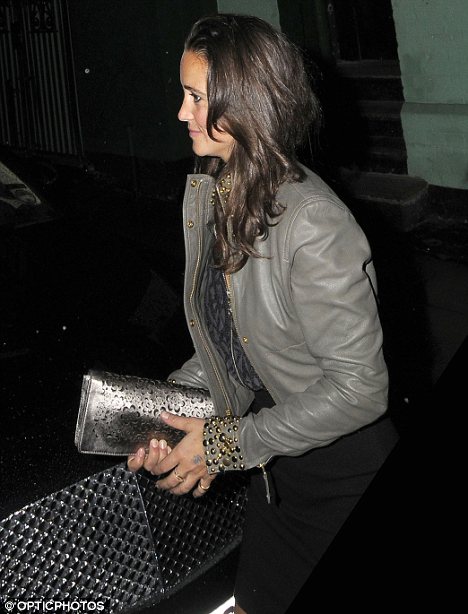 One of my favourite things about Pippa is how she wears her smart/casual outfits with aplomb. She is a lover of jeans, wearing grey skinnies as well  as the bootcut variety beloved of big sister Kate. But by adding pretty tunics,  blouses and shirts, she keeps her looks totally feminine. Pippa seems to be one of those girls who always look smart even when dressing down for more casual looks. 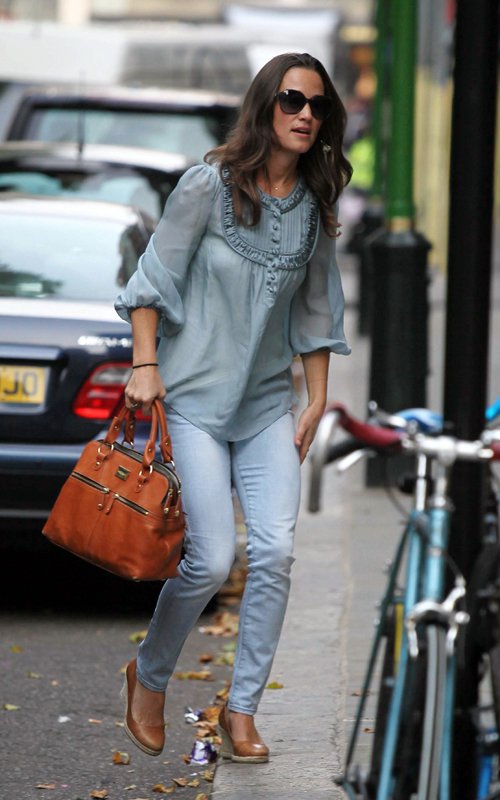 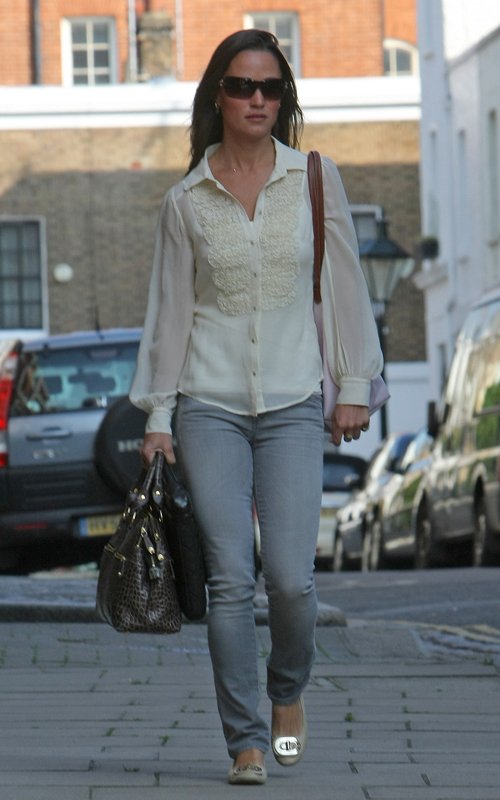 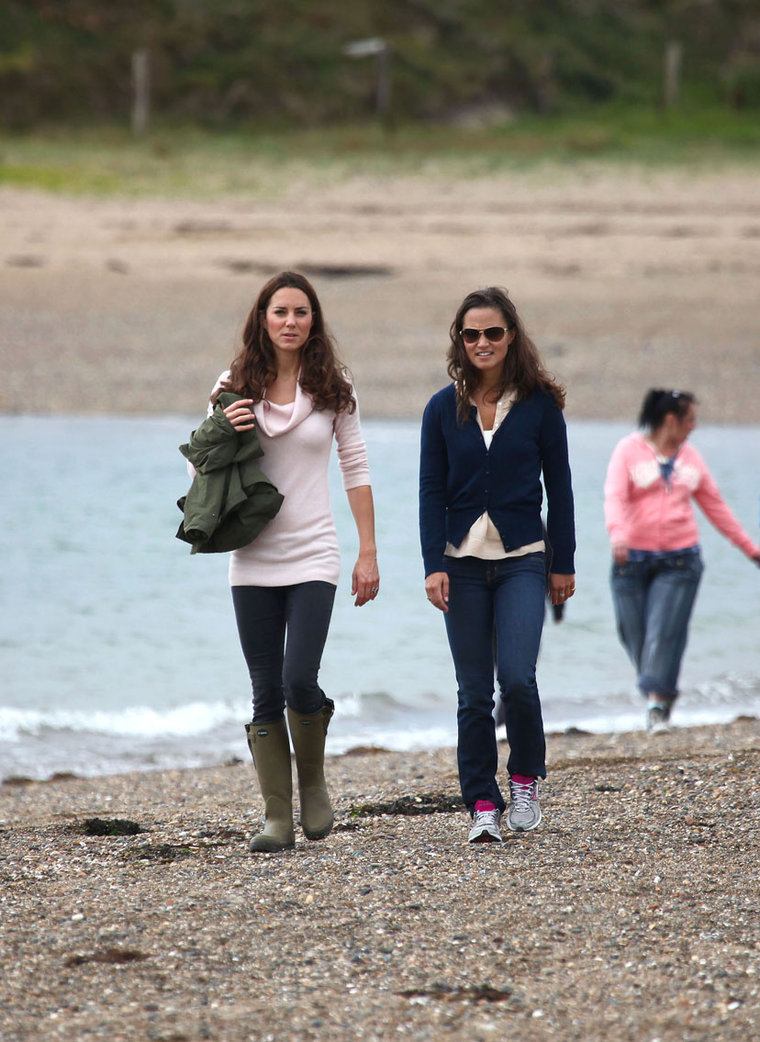 I think these looks sum up the fashion appeal of Pippa. She sticks to the styles and shapes that flatter her figure, accesorising with neutral accessories. She always looks stylish and ladylike, even on her most casual days. She wears carefully picked designer peices, but also stays loyal to the High Street. And she never looks like she’s trying too hard, which often means that she looks so much better than stylist obsessed celebs. All hail Pippa…we salute your choices!