Last night I was privileged to watch an astounding piece of theatre. ‘Moon on a Rainbow Shawl’, a 1957 play by Errol John is currently having a revival, touring nationwide in a production by the Talawa Theatre. I caught the opening night at Birmingham Repertory theatre and was thoroughly enthralled by what was an epic production. 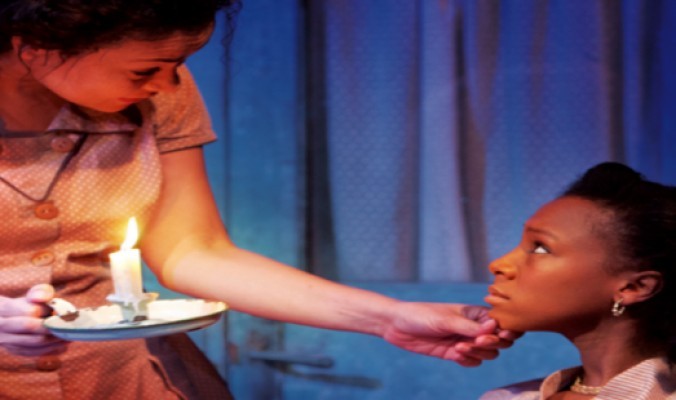 The play is set in the mid 1950s in Port of Spain, Trinidad, and all the action is confined to a yard containing poor tenement housing. We meet a host of characters, the downtrodden Mrs Adams, who works day and night, married to Charlie, a man who was once an inspirational sporting hero, but is now a drunken shambles. Their daughter, the intelligent, enchanting Esther, has real hope for the future, as long as she is allowed to get to High School. 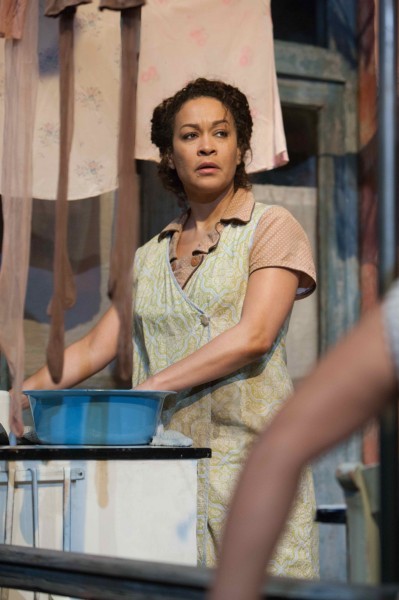 Also living in the yard is the beautiful Rosa, in love with Ephrain, a trolley bus driver who longs to escape the yard in particular, and Trinidad in general. Rosa is edging her bets in a flirtation with her aged boss and landlord Old Mack, he showers her with gifts but wants something more in return.

Completing the yard is the sassy, vibrant prostitute Mavis. Gloriously robbed in bright colours, she is the peacock of the yard, all vivacity and sex, but possibly the only one who ever pays her rent on time. As played by Bethan Mary James, Mavis is a real presence who lights up every scene she is in. Teamed with her ‘Prince’ (Ray Emmet Brown – hilariously loveable and warm),  Mavis emerges as a strong symbolic figure, she is the only one who both gets her man and seems to be in control of her life. 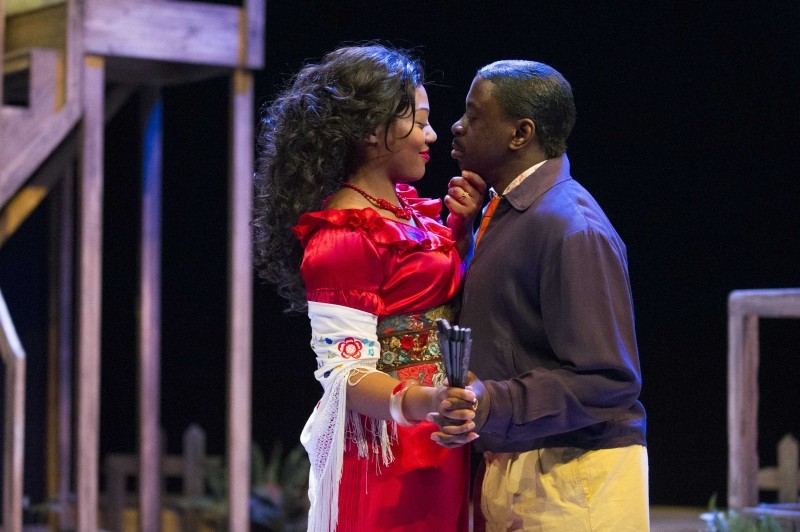 The play manages to combine real moments of wit and humour (Mrs Adams – the magnificent Martina Laird, in particular has some hilarious one liners), but this is also combined with moments of deep pathos, and some unexpected violence.) Ephraim (the towering Okezie Morro) in particular evokes feelings of foreboding – off to the promise land of Liverpool, hindsight shows us that this may not be all his wishes it to be.

Ultimately the finale of this play leaves us with just a little hope. You have truly come to care about the characters and by leaving the play with Esther centre stage, you hope that she will be the beacon of light facing a different sort of future than the other inhabitants of the yard.

With the gentle sounds of the lilting Calypso music, and the sometimes haunting use of lighting, this play looks and sounds beautiful. And combined with a uniformally brilliant and magnetic cast, this is a play that has been unfairly forgotten and neglected for much too long.

Moon on a Rainbow Shawl is at Birmingham Rep until Saturday 22nd February and then continues to tour nationwide.