On Tuesday night I attended the press night for ‘The Dishwashers’ at The REP, Birmingham’s renowned Repertory theatre. The REP was launching it’s 2014 season with this clever, thought-provoking play by Morris Panych, described as ‘…a delicious play about the Zen of dishwashing’, and expectations were most definitely high, particularly with the almost legendary David Essex in the lead role. The great news is that the plays delivers in all areas. 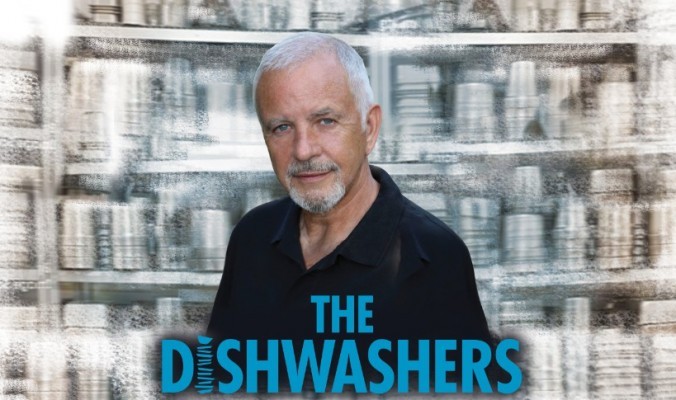 The play is effectively a three hander. (although I must give a nod to Jared Garfield, who makes an appearance as yet another ‘new boy’ in the final scene and is a likeable presence). Rik Makarem, recognisable to all Emmerdale fans as Nikhil Sharma, is Emmett, a once high flying city slicker now reduced to taking a job as a dishwasher in one of the very restaurants in which he used to dine. He enters into an environment ruled by the mysterious Dressler (David Essex), a kitchen sink philosopher who has happily worked amongst the grimy plates for 30 years, a ‘man without dreams’ who seems perfectly content to be so. The third cog in the kitchen is Moss (Andrew Jarvis), aged and dying, more than ready for a retirement that he doesn’t want. Together they work in the anonymous kitchen in the bowels of the restaurant, a murky, dirty place that could be (and is for Emmett) a place of despair, but is also a place of security for Moss and pride for Dressler. 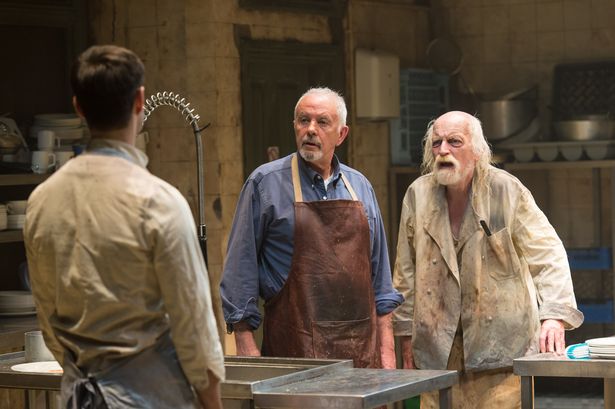 In the lead role, David Essex is an oasis of calm and control. He brings just the right amount of world weariness to the role, and is in almost every scene, playing each one perfectly. Andrew Moss brings pathos to the role of Moss, a man who seems to be teetering half way between life and death and not quite sure which path to take. The real revelation is Rik Makarem, who’s character changes the most throughout the course of the play, from optimistic to the pits of despair, and then channeled with energy at the thought of making a difference to ‘The Dishwashers’, to the final, surprise scenes. I won’t spoil them, but will say that the old adage ‘be careful what you wish for’ has never resonated more truly.

One thought on “Reviewed – The Dishwashers at The REP”