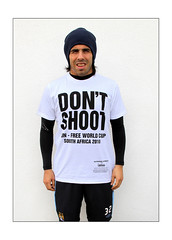 This weekend I have experienced the full power of the slogan t-shirt. An item of clothing that Iwould never wear under normal circumstances, the slogan t-shirt is a modern classic, immortalised by Katherine Hamnett designs in the 1980’s. Who could forget Wham wearing ‘Choose Life’ tees whilst singing ‘Wake me up before you go go‘, or ‘Frankie says relax’ tees that were worn by everyone, including my 6 year old sister, totally in ignorance of the controversy behind Frankie goes to Hollywood, and that song. Katherine Hamnett famously meet Margaret Thatcher whilst wearing her slogan tee – shirt, keeping her politics close to her chest.

Slogan tees saw a revival a few years ago through the cheeky designs of House of Holland. His irreverent designs were tributes to other designers and models, with slogans like ‘Get your freak on Giles Deacon‘ and ‘Flick your bean Agyness Deyn‘. These were much copied on the high street, and the slogan t-shirt re-emerged with vengeance. The Jennifer Anniston/Brad Pitt split saw the famous ‘Team Jolie’ ‘Team Anniston’ T-shirts, whilst Eva Longoria was pictured wearing an ‘I’ll have your babies Brad’ slogan tee, said to have upset the devastated Anniston. Jordan became the queen of the slogan tee-shirt, sometimes wearing an expletive laden one to send a message to the press.

Companies like Amplified,Wildfox and Truffle Shuffle became key places to buy a slogan tee-shirt, with Amplified making retro rock band type tee-shirts and Wildfox bringing out the much worn ‘Love potion No 9’ top.

I had always resisted slogan t-shirts, having a large bust I felt it was asking for trouble emblazoning a slogan across it. But this weekend, as part of the Hen weekend celebrations, I have walked around London in a SEX IN THE CITY inspired Sexy hens on tour t-shirt. And I have finally understood the power of the slogan. Everyone will try to read the slogan, or, at least men will pretend to whilst staring at your boobs! Complete strangers will discuss the slogan, we were accosted by people who wanted to know what  the t-shirts were for, what we were going to be doing, where we were going etc.  The tee elicited smiles from almost everyone. And…most amazingly of all, by wearing the tee with a neat pencil skirt and knee-length boots, I frankly looked the most streamlined that I have done in years, an absolute, completely unexpected bonus.

The t-shirt I wore. Cheesy - yes! attention grabbing - you betcha!

I actually think I might be hooked on the slogan tee-shirt. And this season, tees have a very girly feel, with Chanel style bottles, and french slogans available from Debenhams and New Look. There are tributes to Glee, and cute, one word slogan tops too. So, spread the word with a slogan tee-shirt, you might find yourself hooked! 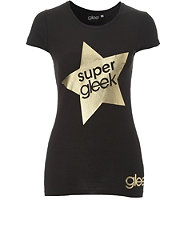