Becoming a mom is one of the most physically gruelling things you can do to your body, though sadly without the end result of washboard abs or a pert booty. When you have a young family, it’s so easy to let fitness fall on your list of priorities but this only leads to low self-esteem and even lower energy levels.. You can make the decision to prioritise your fitness regime, and one that works for you by making smart choices, and working out for a small period of time, every day. Here are some ways you can do so quickly, and effectively, even with a busy lifestyle.

Image by Sangudo used under the Creative Commons license.

Walking is the best thing you can do for your body to slowly build strength and fitness without putting unnecessary stress on it. If you can’t neglect your everyday chores to make time for a stroll, then build walking into your day’s routine. Park a few blocks away from the supermarket and make up the distance on foot. Walk the kids to school if it’s in the local neighbourhood, vow to take the dog on a brisk walk every morning, and make play dates with other moms for a stroll rather than a sedentary hour in the park. At the weekend, a hike is the perfect way for your family to get healthy together. Make sure everyone is well-equipped with good quality walking socks and boots, and work together to navigate to make it engaging.

Our body does not always get all that it needs from our diets and lifestyle, so we sometimes need to give it a helping hand. Adding a multi vitamin from Epsilon Life could be the answer if we feel we need to give our immune and digestive system a boost. Epsilon’s Multivitamin and Mineral complex is Vegan certified, and  has, among other ingredients Iron, B-complex, Ginkgo Biloba and Ginseng. It will give you all the vitamins you need in one tablet, and not only will you feel better, but you will look better too, with healthier looking hair and skin.

Your fitness is about 30% exercise and 70% diet, so the importance of what foods you choose to put in your body cannot be overstated. If you have a busy lifestyle, aim to eat small meals, often, to sustain energy and concentration. Ditch sugary, processed food, and anything you have been using as a crutch to get you through the day, whether it’s that third cup of coffee, cans of diet soda or chocolate bars. Exercise and a positive attitude will eventually replace these. Snack on fruit, veg, boiled eggs, nuts and cottage cheese, and whatever you do, don’t skip breakfast.

Many people are now turning to a plant based diet in order to improve their health and well being. Veganism is now seen as a way to not only improve all of their general health, but also to help save the planet too. If you are thinking of changing to a plant based diet, or want to see what effect certain meat products may have on your body and what they can be substituted for you could have a nutritional health test.

HealthLabs.com has been offering customers affordable lab testing online since 2015. These can help to identify which meat or animal products are causing body irritation or what nutrients are lacking which may be addressed by adopting a plant based diet,  nutritional panel tests can also identify other common deficiencies in a broader diet. These tests are far cheaper than if you try to organise through a doctor and can really help you to achieve greater well being.

If you are based in the US and would like to organise a test, you can save 15% by booking through this link.

Make some time for you

You can power walk and chow down on granola bars all day long, but if you’re mentally frazzled, it probably won’t help much. Allocate a set time every day (or every few days) which is just for you. This might be an hour in which you go for a massage. You may want to indulge in an evening yoga class, or spend the morning painting. It could be a creative writing class, or a book group. Whatever it is that helps you reconnect with yourself, make time for it. Your sense of personal well-being depends on it.

The first trailblazing Brit to pose on the cover of Playboy, as well as being the face and body of computer game heroine Lara Croft, Nell McAndrew knows a thing or two about the power of style and image.

These days, having successfully transcended the space between lingerie model and fitness guru, the 38-year-old likes to keep it low-key and sporty. “I usually stick with something that’s simple, but that still makes me feel fantastic,” Nell explains, trying to keep six-year-old Devon occupied in the background. “It’s all about comfort, and fabrics that really work for exercise. I think less these days about my ‘style’, if you want to call it that; for the simple reason that I don’t think I really have one.

“I live in fitness wear because fitness is my life right now, whether I’m training for a marathon, working on a fitness DVD or running round after my family.

“I can’t do any of those things if I’m concerned about what heels I’m wearing or how to accessorise my outfit. I’m not even great with make-up these days – a bit of eyeliner and some lippy and I’m good to go! As long as I’ve got some rel=”nofollow”stylish sportswear, I’m happy.” 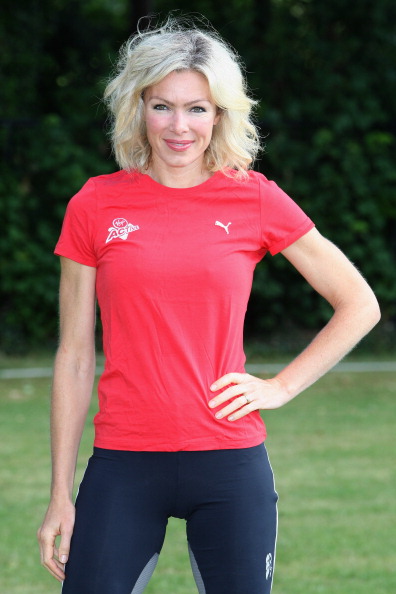 LONDON, ENGLAND - JUNE 07: Nell McAndrew poses as part of the celebrity team for the London Triathlon at Virgin Active on June 7, 2011 in London, England. (Photo by Danny Martindale/WireImage)

It’s refreshing to hear a celebrity who, let’s face it, has grown a career out of fashion, now so at ease with what she wears.

“Naturally, if I am going to make the effort, I’ll wear something a little smarter, but even then I’m mixing and matching. I don’t think there are the hard and fast rules that there used to be. I like nice clean lines and some colour blocking, but that’s usually enough.”

The low maintenance approach is understandable given that Nell is currently juggling long-distance training with work on her new fitness DVD, as well as keeping her son entertained over the school holidays.

“It’s a balancing act,” she laughs, “but it’s no more than any other working mother. And while my son comes before anything else, I enjoy my work and I’m in a good position. The DVD has been an exciting project – 10 years on from our last one, we’re all still going strong. I suppose that proves that exercise really is good for you.”

And the Leeds-born beauty should know, having competed in six London Marathons, running this year’s race in well under three hours; an awesome feat. Nell believes it’s all down to her love for the sport. “Running, it’s the easiest for me; a really good stress relief and it’s the best for my body type. I find nothing else makes more of a difference or makes me feel better.

“I do love my weights for core strength and better posture, flexibility, that sort of thing. My idol, Jane Fonda swears by a combination of running and weights. Why do you think she looks the way she does?! She has worked hard and stayed disciplined and that’s the result. She’s an inspiration and worthy of being followed.”

Nell tackled another challenge herself not so long ago (dressed as a squirrel, no less), in the form of this year’s Royal Parks Half Marathon, which took place in London’s Green Park, St James’ Park, Kensington Gardens and Hyde Park, on October 6.

“There’s such a lovely buzz and a great crowd for this event. It’s not just about the running either; there’s a brilliant food fair, a band playing, and loads of families come along just to make a real day of it.

“What I love most about the event is you get to go through some fantastic Royal Parks. London is very built up, but I think people forget it also features some of the best parks in the country.”

For more information on the Royal Parks Half Marathon, visit www.royalparkshalf.com.