Can a perfect murder ever be committed, or do human frailties mean we miss tiny details that would inevitably get us caught? That is the premise for ‘Dial M for Murder’, a claustrophobic thriller by Frederick Knott that was most famously bought to life by the genius of Alfred Hitchcock and the beauty of Grace Kelly. A new production by Lucy Bailey is currently playing at The Rep theatre in Birmingham, and I went along to see how the suspense holds up 60 years after it was originally written.

The story is many layered. The glamorous Kelly Hotten plays Sheila Wendice, a once adulterous, now devoted wife of ex- tennis player Anthony Wendice. Her ex-lover Max Halliday has returned to her life after a spell as a television crime writer in New York, but she is determined to stay loyal to her husband. There is only one fly in the ointment, a love letter from Max to Sheila had been lost during the theft of her handbag a year previously, and Sheila has seemingly been blackmailed, although no money has actually been claimed. Sheila is therefore frightened that the dormant affair will be discovered, and put her now perfect marriage to Tony at risk.

Unknown to Sheila, Anthony, bitter and dried up in his professional life, knows all to well about the affair, and has been plotting the demise of his wife through the perfect murder. But, as crime writer Max states, there is no such thing as the perfect murder, as human’s are often given away by the tiniest detail that they completely forget about. This proves to be the case, but the clever, calculated Tony Wendice has another plan up his perfectly tailored sleeve. Enter an Inspector with an eye for detail – will he so easily believe the perfect murder? 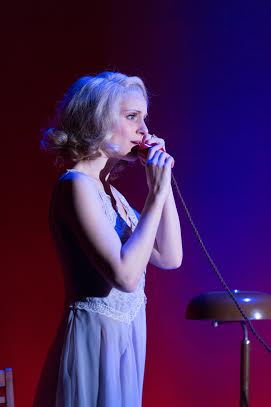 The cast of five players are uniformly excellent. Sheila is played by Kelly Hotten as a kittenish mixture of sensuality, who gradually falls apart as it becomes apparent the police don’t believe she is a victim, but a killer. Christopher Timothy exudes decency as Inspector Hubbard, a little world weary, but still having a real nose for a case that seems to good to be true. Philip Cairns as Max Halliday plays the role like a retro matinee idol, a real Hitchcock style hero who never gives up on trying to protect the leading lady. Robert Perkins is brilliantly seedy as Captain Lesgate, aka Swann, a charming bad apple who finds his past catching up with him in the most terrible way possible. A brilliant cast through and through, but it is Daniel Betts as the charming sociopath Tony Wendice who steals every scene he is in. A cold, calculating, but utterly charming character, Wendice channels the gamut of emotions, from chilling, methodical calculation as he outlines the perfect murder, to faux outraged indignation on behalf of his ‘beloved’ wife.

Everything else in note perfect in this production. This is a play that is all about the little details, and they are covered to excellent effect, from the blood red set that revolves, allowing you to watch scenes unfold from all perspectives, to the use of silence to build tension. The jazzy theme works very well, especially when it rises to crescendo at key points, and the red curtain that is pivotal to the plot leaves the audience acting almost like a voyeur.

Quite simply one of the best plays I have ever seen, Dial M for Murder is one not to be missed. It runs at the Birmingham Rep until Saturday 17th May. For ticket information, click here.

3 thoughts on “Dial M for Murder spellbinds at The Rep”