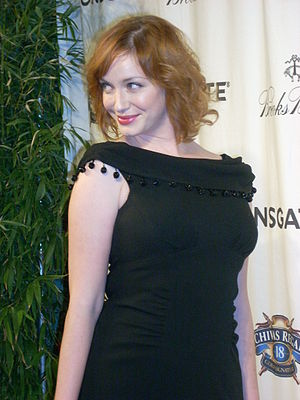 As regular readers of Fashion-Mommy know, I just adore Christina Hendricks. To me, she is just the most beautiful women on TV, with a curvy hourglass figure to die for. But Christina doesn’t always get it right in the fashion stakes. On Mad Men, Janie Bryant styles her character Joan as a regular bombshell, in curve enhancing suits and dresses, but  in real life, the thoroughly modern Christina struggles to dress for Hollywood occasions due to designers just not catering for her sort of figure.

Recently,  Christina was photographed on a beach in a black one-piece swimsuit, which sent the press and blogosphere into heated  debates about her body – is it beautiful, or just fat, screamed the columnists, with thousands of comments posted for each opinion.  On the Hollywood life website, a picture of Christina was posted next to a photograph that had been posted on Twitter by the ultra slim Leanne Rimes, with the question, “Who’s hotter in a swimsuit? Christina Hendricks spillout curves or LeAnn Rimes’ ultra lean limbs?”  Voters overwhelmingly voted for  Hendricks by an overwhelming 82 percent.

But, that picture aside, it seems that Christina admits that dressing for a day at the beach is not easy when you have ample curves. She is quoted as saying about swimsuits ‘It’s really hard if you’ve got breasts. You either get smooshed down or there’s no support.’ So is it any wonder that Christina has decided to  launch her own range of swimsuits? After struggling to find something to enhance those famous curves, Christina has decided to have a go herself.

I really understand where she’s coming from. For curvy girls, the beach and pool is the easiest route into a landmine of embarrassment. Costumes can be too tight and almost flatten your mammories to the extent that they balance on your stomach. Or you can get the overhang where they pop out the side of your tankini/bikini top. Tankini’s ride up and leave bellies exposed, totally the opposite of what we bought a tankini for. It almost makes you want to grab a kaftan.

So I  am really glad that Christina is going to attempt to design a swimsuit for curvy girls. At least she understands what it actually means to be curvy, and hopefully will come up with something that enhances fuller figures. In the meantime, Evans has some really flattering swimsuits that will look fabulous by the pool or on the beach this summer.