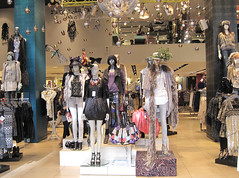 I HATE CHANGING ROOMS! I feel better for saying that aloud. I break out in a cold sweat at even the thought of trying things on in a shop changing room. I frankly would prefer to take things home and then bring them back again, rather than going through the trauma that is a shop changing room. Is this irrational? I don’t think so. Does it create extra time consuming, travel and expense when you have to return the unwanted/unsuitable item? Possibly, but a return trip is a shopping trip non the less, and you might find something else to buy when taking something back, which is always a bonus. Is this just me? I think not.

I think my fear originally occurred in my early teens, due to the dreaded communal changing rooms. I used to spend some Saturdays in West Brom, and one shop I frequented was the late, if not lamented, Mark One. (Later to be MK ONE, but cheap and nasty all the same. Mark One had a communal changing room, and as a young teenager I found this to be both embarrassing and humiliating. All these grown up, busty women stripping off whilst I was trying to cover up my training bra. In addition, there were always women who insisted on bringing their eight year old sons into the changing room, which only made my sheer terror at removing clothing even worse. Whoever had the great idea for communal changing rooms should be made to use them on a hot sweaty Saturday, when they are packed with people, and quite frankly, they smell.

Flash back to the present and communal changing rooms seem to have disappeared, but my aversion to any sort of changing room continues. They are frankly, horrible places. Key culprits in the humiliation stakes are River Island with the three mirror syndrome. I want to see what the dress looks like from the front. A back view is nice as I don’t have eyes in the back of my head, but  a side view? Any women who carries weight on her stomach DOES NOT want a sideways view. It always looks horrendous, you never buy the outfit. In addition, the River Island lighting is so bad, you spend more time checking out the pastiness of your skin rather than the amazing top you were so interested in on the shop floor.

But River Island are not the only culprits. The flagship branch of Topshop in Birmingham‘s Bullring is so hot, particularly in Summer, that you spend your time rushing to get the clothes on and off, before you pass out with heat stroke. Haven’t they ever heard of air conditioning? Wallis have large changing rooms, but the curtains are so high that I find it difficult to close them, and so often strip off hiding behind the millimetre I managed to pull shut. The queue for Primark changing rooms are enormous, and as I have no patience, that’s a definite no-no.

My most shocking recent disaster in a changing room occurred in a local branch of a shop called Store 21. This had a changing room with a curtain rather than a door. I had seen a maxi dress in there, and against my better judgement, had asked to try it on. I was stripped down to the undies when suddenly someone grabbed the curtain open. I screamed ‘nooooo’ and struck out whilst trying to grab the curtain and retain some dignity. There, on the floor was a young boy of about eight years old who I had virtually knocked out whilst grabbing the curtain back. I made a quick exit and left the store without the dress. I haven’t returned since for fears of wanted posters with my face on staring out at me.

But it’s not fair to just blame the changing rooms themselves. When I feel the need to try something on, I have always worn the most inappropriate underwear imaginable. Black bras to try on white dresses, Bridget Jones knickers that are slightly discoloured, ripped tights etc. And this must be a family trait as my sister recently went for a wedding dress fitting in the most unbridelike white bra.

In addition, clothes look better when you have your make up on and your hair looks clean and tidy. That’s not always the case when fashion-mommy goes shopping with Baba in toe. The looks you get given in Coast when you ask to try on an evening dress whilst holding a chocolate smeared toddler in your arms are not friendly. You often can’t get a pushchair into the changing room, and won’t leave Baba on his own outside, so you are basically barred from trying clothing on anyway.

And that’s basically why I hate changing rooms. But it wouldn’t be fair not to highlight the good ones that make the shopping experience better.Monsoon have good changing room with chairs, carpets and one nice big mirror. I had a good experience in the Monsoon branch in Stafford. Baba was about 5 months old and in a rather large travel system. I had seen two dresses I liked, but couldn’t decide which one I liked the best. A sales assistant asked  if I wanted to try the dresses on and I pointed to the pram and said no thanks – I couldn’t leave the baba. She took my to a really large changing room that was locked and said – you can use this. It was enormous, I could get the pram in easily. suffice to say, I bought BOTH dresses that day.