In the midst of the glamour and hustle of London Fashion week, the fashion community turned out to remember one of their own. Yesterday, a service of remembrance was held to celebrate and remember the life of Lee ‘Alexander’ McQueen, who took his own life earlier this year. 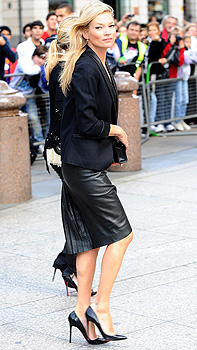 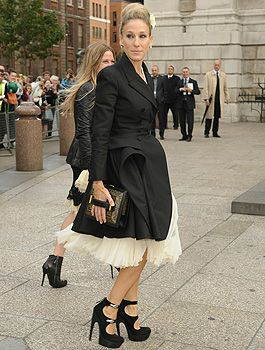 The ever stylish SJP at the McQueen memorial service.

Sarah Jessica Parker, Kate Moss, Naomi Campbell, Daphne Guinness and Anna Wintour were amongst those attending the memorial service to the tragic maverick genius, whose designs elicited a stream of strong emotions amongst fashion critics. Some loved them, even uncompromising collections like ‘Highland Rape’, with its mixture of rough Scottish tartan and lace creations. Isabella Blow, the eccentric, and ultimately tragic fashionista, bought McQueen’s entire first collection, and was his early mentor. Her suicide in 2007 devastated McQueen, and along with the deaths of his beloved mother and Aunt, were probably contributing factors in McQueen’s own suicide in February 2010.

At the time of McQueen’s death his latest collection was everywhere. I personally didn’t like the graphic, snake inspired prints and fabrics of his latest collection, but they were worn by the likes of Lily Cole, Anna Paquin. Jessica Alba, Selma Hayak and Sarah Jessica Parker. Parker was one of McQueen’S biggest fans, as well as a close friend, and had worn his amazing creations at both London Premiere’s of the Sex and The City movies, making front pages everywhere. She also attended the Met ball in 2006 with McQueen as his muse in a Highland Rape creation. Another huge fan and personal friend was Lady Gaga. She turned her performance at the Brit Awards in March this year into a tribute to her friend, and was visibly upset throughout her performance. She wore a McQueen creation to the VMA’s in 2010, and has worn McQueen on many other occasions.

McQueen was a true fashion original, his skull printed scarves had a host of celebrity fans and inspired a million High Street copies. He wasn’t afraid of controversy. At the height of the ‘Cocaine Kate’ scandal, McQueen sent an ethereal hologram of Kate Moss down in the catwalk in Paris has a show of support for the troubled model. The crowd roared with approval, but the reaction could’ve been so different. McQueen didn’t care, he wanted to show his support for a friend.

And that’s why they turned out yesterday to say remember a friend, style genius, but ultimately tortured soul. The world of fashion is ultimately a less interesting place without Alexander McQueen, but we will always have the creations. For that, fashionistas everywhere are truly grateful.