The Birmingham Royal Ballet celebrated David Bintley’s 20th anniversary as director with the opening of a new double header. The World Premiere of ‘The King Dances’ and a revival of ‘Carmina Burana’ promised to bring drama, morality, sex and just a little bit of horror to the Birmingham Hippodrome, and this was all delivered in spectacular style.

The King Dances is a brand new ballet from David Bintley. Freely based on Le Ballet de la Nuit from 1653, and on the legendary Louis XIV, the Sun King of France, ‘The King Dances taps into dance and theatre from history by being performed by a company almost wholly made up of male dancers. This leads to a performance highly charged with masculine virility, with the dancing being vigorous and dominant.

We are taken through night by night himself (La Nuit – a dramatic turn by the always amazing Iain Mackay.) The golden haired king (William Bracewell – Le Roi) enjoys dancing as the sun departs and night arrives, and is later charmed by the beauty of the moon (Selene, La Lune Yijing Zhang – enchanting).

Things really come alive in ‘The Third Watch’, when the King’s restful sleep is utterly disturbed by a series of horrifying night terrors. This is exhilarating to watch, as the demons and satyrs, werewolves and magicians all seem to be ready to devour the terrified King. The haunting, menacing music, performed with vigour and drive by the Royal Ballet Sinfonia,  lends this the feel of Dante’s inferno, and the staging is excellent – creatures just seem to materialise from the darkness.

Carmina Burana is a thoroughly modern ballet, one filled with drama, sex and humour. From the moment you hear the opening strains of ‘Oh Fortuna’ you know that this is going to be a high octane piece of performing arts – the music has been used to good effect in everything from’ The Omen’ to the Old Spice add and Fortuna herself, Celine Gittens, is lithe and sensuous  in her delivery of the dance.

Carmina Burana is a modern day morality piece from David Bintley, following the fortunes of three Seminarians who lose their faith (signified by the casting off of dog collars.) We then follow them as they fall in love with the wrong people, lose themselves to violence and rage, and ultimately seem to be enthralled by Fortuna herself. The ballet is dazzling in its lust and sexuality, but is also very funny, and has nods to Busby Berkeley, West Side Story and Weimar Germany in it’s scantily dressed dancers straight from the Kit Kat Club.

The scene which lingers long in the memory is ‘The Court of Love’, a beautiful pas de deux filled with a mixture of tenderness and lust. Tyrone Singleton is magnificent as ‘Sick with Love’, performing most of his dance in just his underparts, showing the fluidity and grace of his movements. 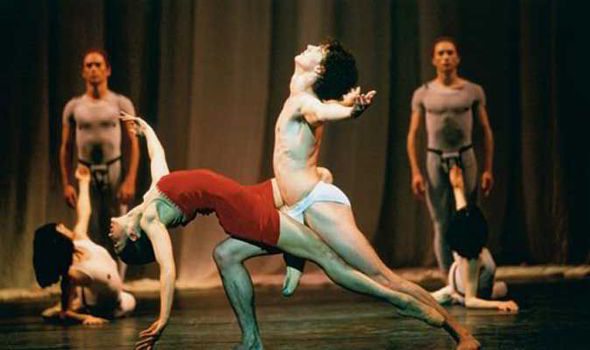 Carmina Burana is hugely entertaining and very crowd pleasing, and teamed with The King Dances, this makes a superb evening for ballet lovers.

The King Dances/Carmina Burana runs at the Birmingham Hippodrome until 2oth June.