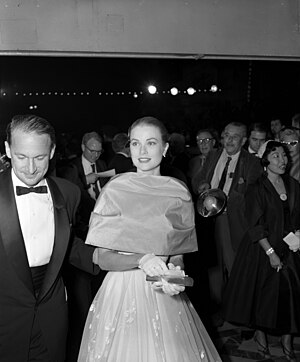 Fashion-mommy was lucky enough to see the Grace Kelly Style exhibition at the V&A last week. After depositing Baba safely with Grandad Mick, and taking a strangely leisurely train journey into the Capital, Fashion-Mommy and her three favourite girlies (My own fashion mommy, sister and BFF Dawn) all spent a wonderful hour or so admiring the wardrobe of a true fashionista, with an ageless style that has certainly transcended the decades.

The V&A was very busy, with all Grace Kelly tickets sold out for the day. I’d like to think this had less to do with the pouring rain and more to do with real fascination with the wonderful lady herself, but who really knows? Certainly the age range of people looking at the exhibits was broad, with women who probably remembered Grace Kelly the film actress from the first time, standing next to numerous art students and fashion students sketching and scribbling furiously in a range of battered notebooks.

The clothes were amazing, with each outfit accompanied by a photograph of Grace wearing it, and Pathe style newsreel footage running on the walls. The 1950’s  outfits were pretty and elegant, a beautiful pale blue/grey dress by James Galanos that  was worn by Grace for the official presentation of wedding gifts had Dawn exclaiming ‘That’s so me!’ The amazing original Hermes Kelly bag remains timeless, a real status symbol that has waiting lists that run into years. Whilst Grace’s Christian Dior blue draped evening dress which she wore during her maternity was totally beautiful, a lesson in elegant dressing.

We tried to guess what size shoe she wore.

I feel that Grace, a real 1950’s icon, found more difficulty moving into the less structured/more freewheeling fashions of the 70’s. Some of the Marc Bohun led Christian Dior designs were more dated, although Dawn and my mom both feel in love with a heavily embroidered, silk chiffon design. These designs reminded my of every 1970’s bridesmaid dress I had ever seen, particularly the sunflower yellow and orange print maxi style dress, another Marc Bohun design. 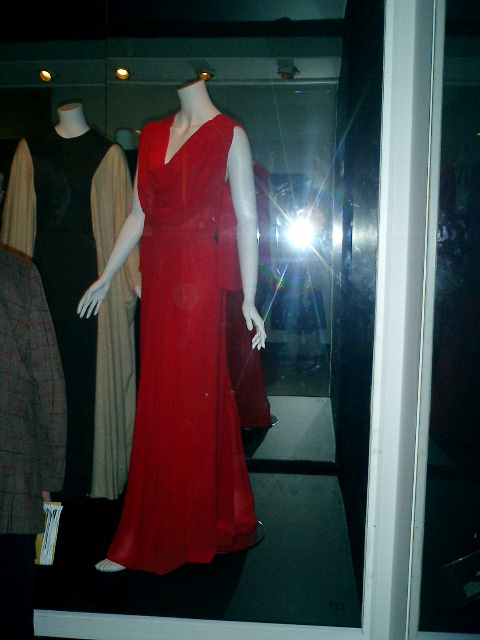 My own personal favourite dress (shared with my sister Jodie) was the 1969 red and gold sequined number from Dior that was worn at the Diner des testes. It had the most amazing high headdress and would be as fashionable and stylish today as it was 40 years ago,

The other dress that made us all gasp was a beautiful Yves St Laurent shot silk taffeta evening gown in purple/plum. This was the dress that Grace had worn to Goldsmith Hall in 1981, just a year before her tragic death in a car accident. On this occasion Grace had met Lady Diana Spencer for the first time. Diana had also been making fashion headlines that night, in the rather revealing Emmanuel strapless black dress that had revealed a little bit too much of the future royal cleavage.  It left me strangely wistful thinking about the unhappy endings these two fairytale princesses had eventually been led to, but on that night, in 1981, they still seemed to have happy and long futures ahead of them.

The final section of the exhibition was given over to the costumes of Grace Kelly the actress. Before Monaco claimed her, she had been Hollywood’s golden girl, Hitchcock’s coolly elegant blonde with a fire in her belly. My mom almost cried when she saw Helen Rose’s designs for Tracy Lord in High Society. I loved the stunning black dress worn by the model Lisa in Hitchcock’s Rear Window, whilst the actual Academy award and the dress she wore to collect it, showed where Gwyneth Paltrow had found her early inspiration. 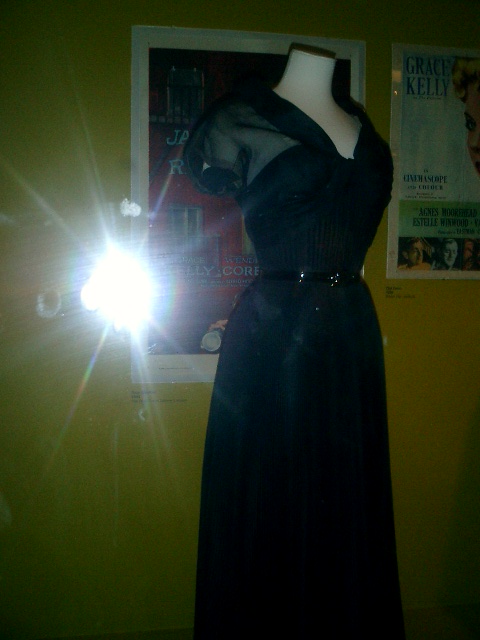 As we finished the exhibition, and purchased amazing Grace Kelly=esque pearls and silk gloves from the V&A shop, we were all momentarily lost in our own thoughts and admiration for the beautiful actress turned Princess who truly had effortless style.