Paris fashion week was full of beautiful outfits, catwalk surprises and star appearances, and the shows of Valentino, Elie Saab and Gaultier had all three. From the buttermilk shades on display at Valentino, to the mixture of Punk 76 and Moulin Rouge Gay Paris 90s at Gaultier, the shows had colour, drama and, with the male model bride that closed the Gaultier show, the ability to shock.

As expected, the front rows were filled with stylish fashionistas sporting a sea of black outfits. Dita Von Teese made appearances at both the Jean Paul Gaultier and Elie Saab shows, wearing her trademark Black Dahlia look. Catherine Deneuve was also front row at Gaultier, showing that real style is endless and ageless, whilst Alexa Chung and Caroline Sieber were perfectly colour coordinated on the Valentino front row, 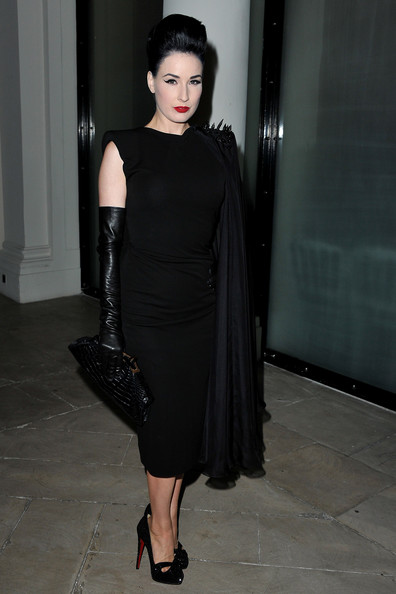 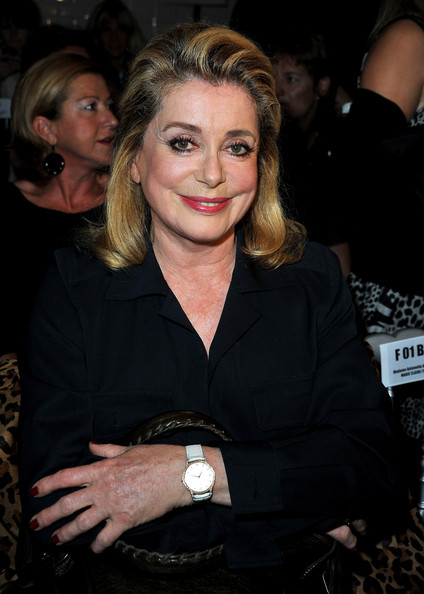 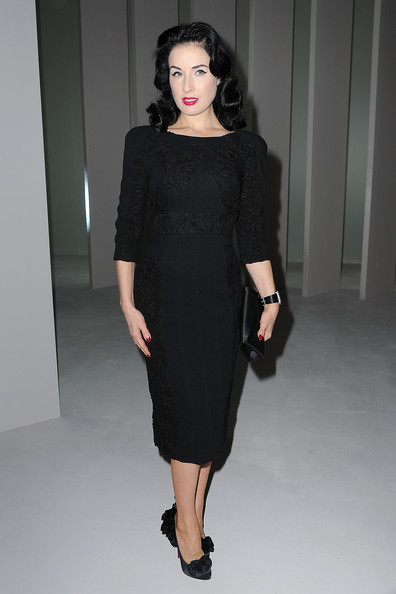 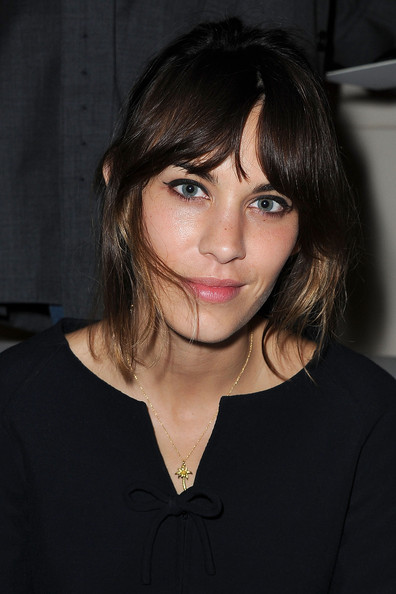 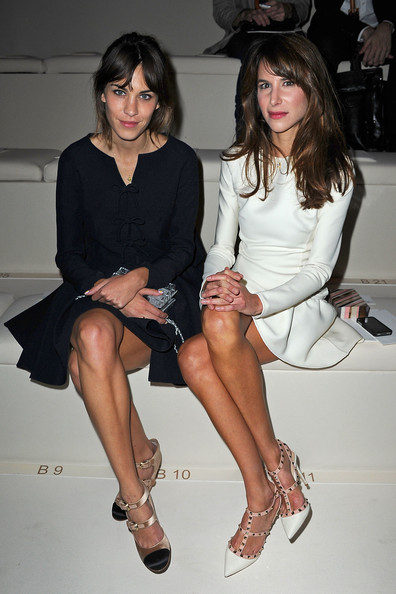 This was a beautiful collection from Maria Grazia Chiuri and Pier Paolo Piccoli. It featured soft and ethereal designs in buttermilk, nude and caramel shades that seemed as light as air. There were delicate frills, lots of lacy Elizabethan style high neck ruffs, and lots of scalloping for edges and frills that gave the impression of waves on costumes.

There were romantic ruffles and pretty butterflies and flowers added onto dresses like applique, and there was a lot of sheer fabrics used in this collection.  The overall impression was of pale and interesting, although there were some striking splashes of colour, including the beautiful red dress that I would love to see Kirsten Dunst wear. I thought that this collection was beautiful, but eminently wearable. Think stars like Natalie Portman, Thandi Newton and even Tilda Swinton,whose bone structure would look amazing in the rose-coloured scalloped frock coat. 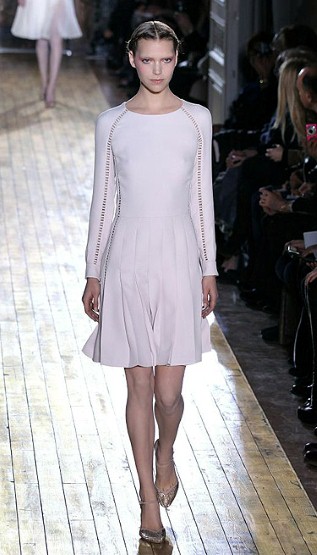 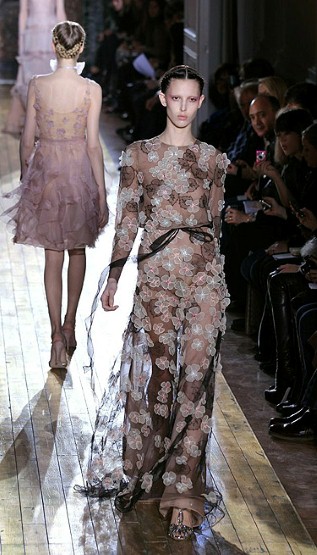 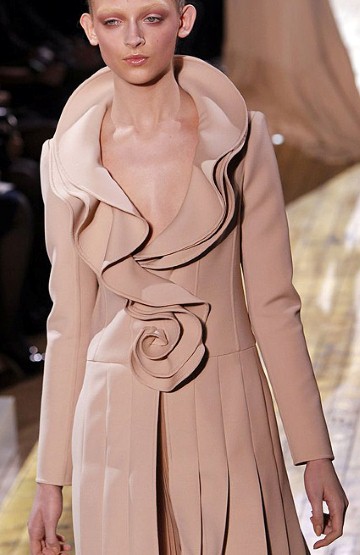 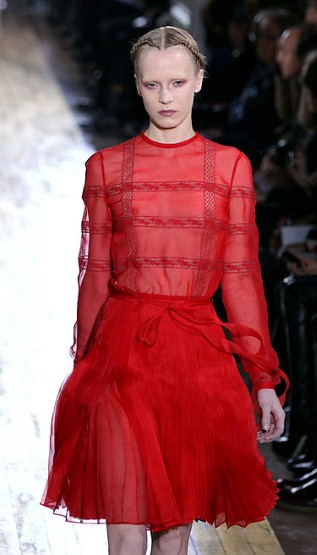 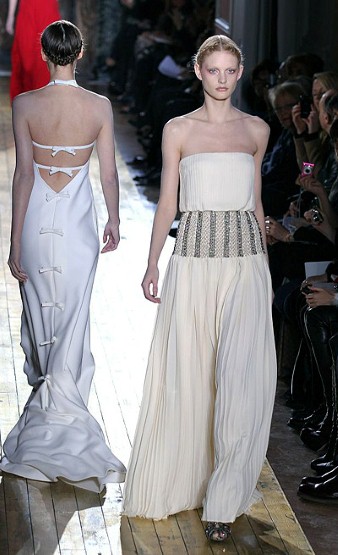 Jean Paul Gaultier – revisiting can-can and Punk in One show.

Who else but Jean Paul Gaultier, the original enfant terrible of French fashion, would use the influences of Moulin Rouge era Paris and London 1976 punk in the same show? There were fish nets stockings, humbug striped can can dresses and Mohicans on display, as Gaultier showed his schizophrenic side. Hot model Lindsey Wixson bought to mind a young Angela Lansbury starring in ‘The portrait of  Dorian Grey’ with her doll-like features and stripy gay 90s tight hobble style dress. This era was also evoked by the rich colours, the multitude of feathers and the cartwheeling catwalk show. I particularly loved the bright orange frock coat style orange dress. 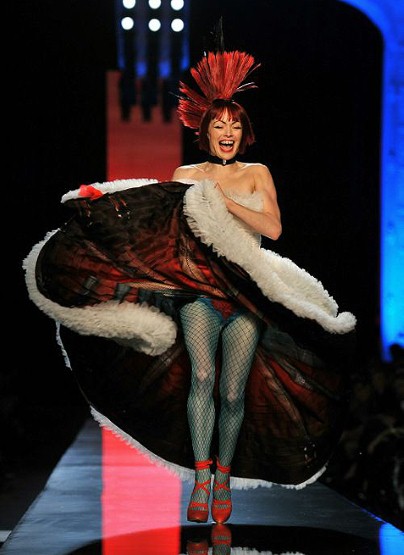 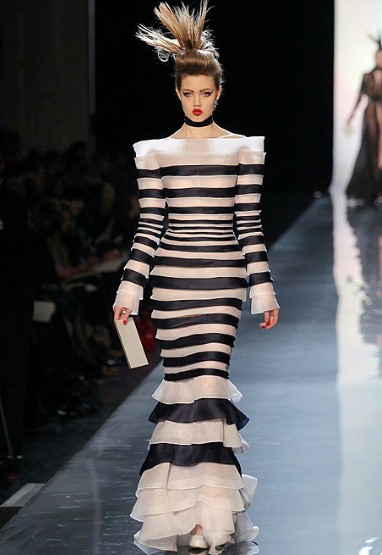 But this was also a collection heavily influenced by the birth of Punk in London in the Summer of 1976. Models were sporting Mohicans and brightly coloured zoot suits, whilst designs had names like ‘The Clash’. There was also some bondage style outfits like those sold by Vivienne Westwood in ‘SEX’, these reminded me of Madonna’s blonde ambition outfits from 1990. 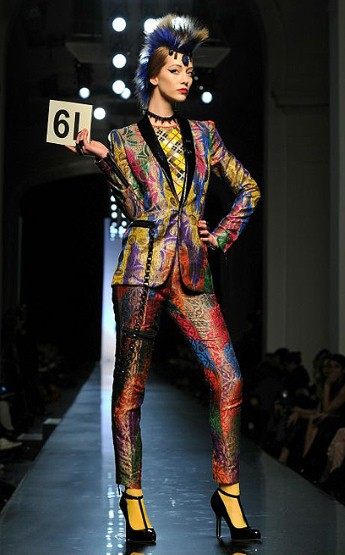 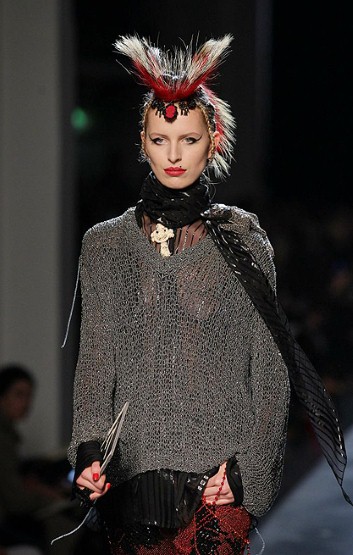 Gaultier ensured his show would gain extra column inches when he used supermodel Andrej Pejic as the bride in his catwalk show. Andrej is a tale, beautiful blonde who also happens to be a man. I feel that this was a controversial gimmick that a show as visually exciting as this didn’t need, and that the attention it has received has been at the detriment of the clothes. Still, you can never accuse Gaultier of taking the safe option! 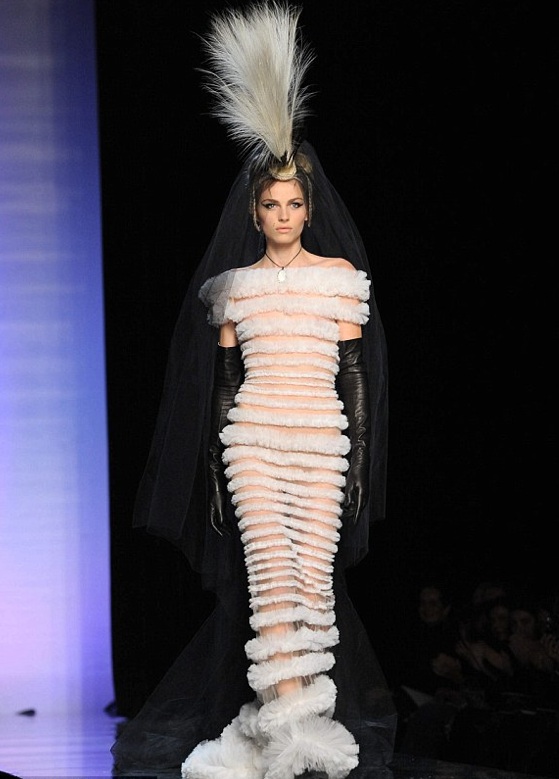 The first thing I want to say is – Expect to see lots of these gowns on the upcoming red carpets. This was a collection that just screamed grown up sophistication. A range of beautiful gowns that went from chic little cocktail hour dresses to those that fully deserved the title full length and fabulous, there was a real feeling of couture about this collection.

There was a good mixture of romantic dresses in soft peaches/golds and whites, but also more dramatic looks in blacks and reds. My favourite shade was the stunning periwinkle blue dresses. There were VaVa Voom designs that would suit Jessica Rabbit, or her alter ego Dita Von Teese, but this is also the collection I would love to see Kate Middleton wear, albeit with some modifications.

As you would expect from an Elie Saab collection, many of the dresses are exquisitely beaded. There are sheer panels, but with beading that spares the blushes and stops the dresses from moving into more risqué territory. Elie Saab is the undisputed master of red carpet dressing, and this collection confirms this. 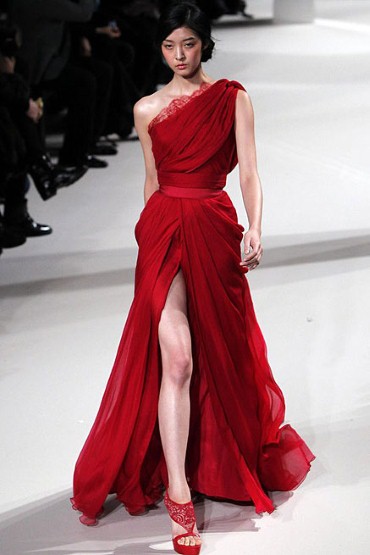 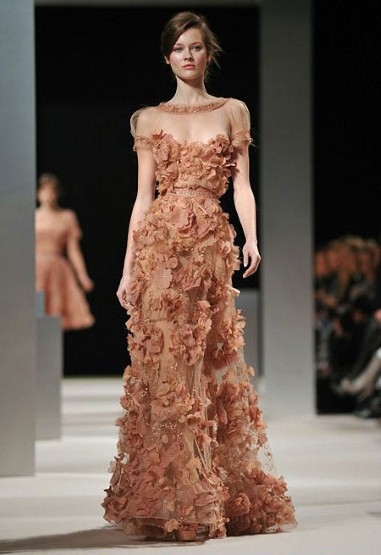 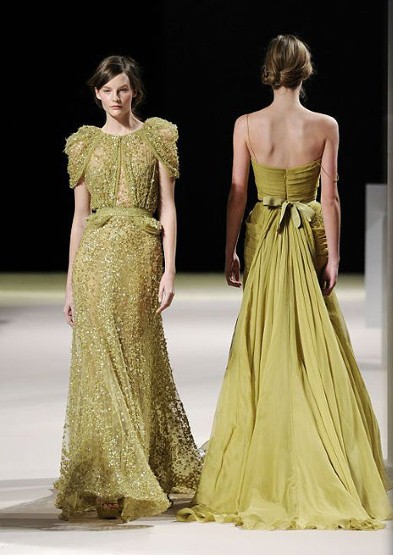 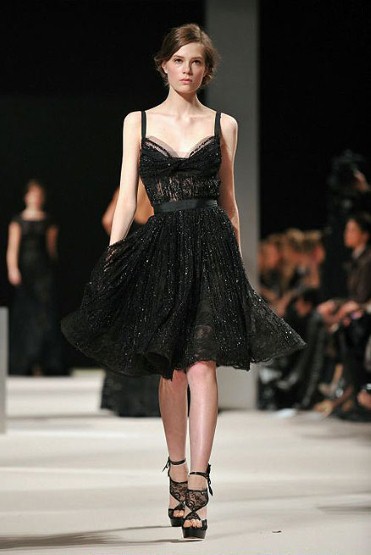 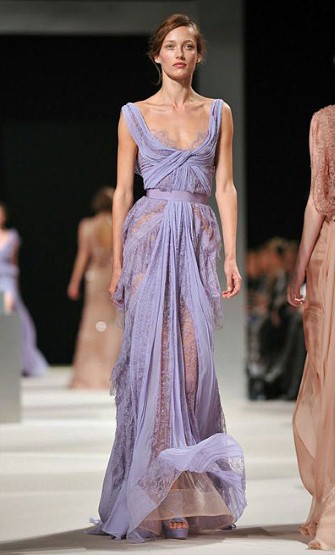 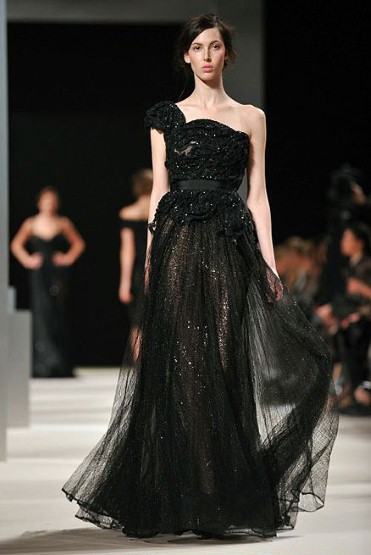 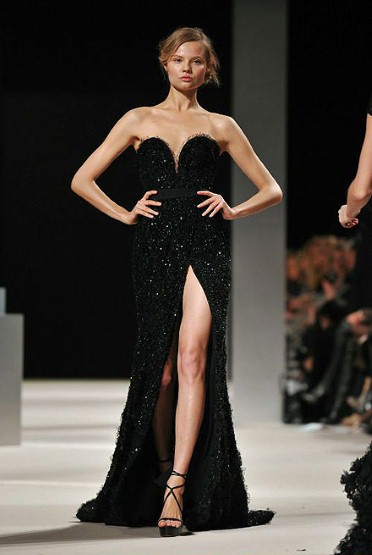 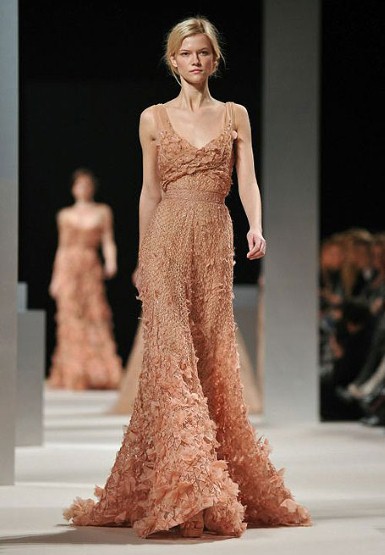 I would love to see Kate Middleton in this dress!