It has recently been revealed that at least 340 blunders are occurring  on NHS maternity wards every day and over 300 ‘never events’ are happening yearly in UK hospitals. These hospital blunders and medical negligence cases have led to significant illness and injury and even loss of life. Pryers Solicitors  have recently published their own infographic which details some of the horrifying cases of medical negligence that they have been involved in. It makes for harrowing, and shocking reading – you put your life in the hands of professionals and really don’t expect to be left in a state that is worse than when you entered hospital. But these cases are becoming more common, and I know this from my own recent, traumatic experience.

My little boy Joe entered hospital at the beginning of February for a routine tonsillectomy, and to have his adenoids removed. We were told he would probably be home the same day, but the operation took far longer than expected, and when Joe was returned to the ward he was severely bleeding from the nose. We were told this was normal, but needed to be monitored, and Joe was kept in hospital an extra day before we were allowed to go home. The nose was still bleeding, but because it was also filled with mucas, we were told this was nothing to worry about.

A week after the operation, Joe collapsed after bringing up an enormous amount of blood that has pooled in his stomach. He was rushed to a different hospital to the resus department, where theatre was kept on stand-by in case of another operation being needed. Once stabilised. Joe then spent the next few days in hospital. The verdict was that the failure to pack Joe’s nose correctly when the bleed occured (possibly due to the nose not being cauterized properly after surgery) had led to an infection with a trickle of bleeding into Joe’s stomach. At some point, a hemorrhage had then caused a large amount of blood to enter the stomach, which had then been ejected in the form of vomited blood and blood clots by Joe. This could’ve been avoided if anti-biotics to guard against infection had been given and the nose had been properly treated and packed to stop the bleed. 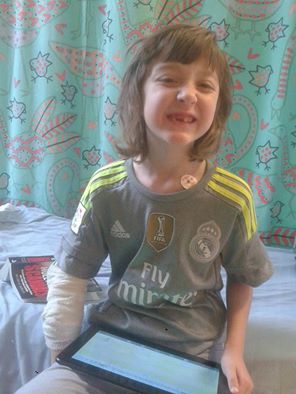 If you, or a member of your family are a victim of medical negligence, you can do something about it. There are solicitors that deal purely with hospital blunders who will be able to give advice, and fight your case if you decide to take it further. We are currently in meetings with our solicitors regarding Joe, my boy is fit and well now, but this is no thanks to them who we placed our trust in.