Lately there has been much talk in the media about Kate Middleton’s recycling of old outfits for official and social occasions, and for her loyalty to the British High Street. Kate has been criticised for using clothes from previous seasons, including that Reiss dress and Whistles blouse, rather than using new designs that could give a boost to the British Fashion industry. She has also faced flack for mainly sticking to High Street brands, albeit High quality ones, rather than opting for a designer option. Even the ever-sensible Vogue editor Alexandra Schulman has waded into the debate, stating in the March issue that she hopes “…the current recession doesn’t drive a beautiful young women…to only wear clothes that we can all afford. We don’t need her to pretend to be like the rest of us.” One website even referred to Kate as ‘The Paper-bag Princess.’ But how fair is this?

Kate wears classic clothes in classic styles. They never go out of fashion because they are never in fashion. Therefore, they become staples that can be worn again and again and still look stylish, elegant and appropriate. Kate wears clothes from the UK High Street and seems have an eye for a bargain. She is reportedly a fan of TK Maxx, and apparently makes trips to Bicester Village designer outlet, often visiting the Alice Temperley outlet. For her official engagement photos she wore a Whistles blouse and a Reiss Nannette dress, both of which have been reissued by the named stores, which is clearly a boost to the British High Street. However, both Reiss and Whistles are at the higher end of the British High Street, we’re not talking Asda George or Peacocks here. Many people aspire to buy these brands, rather than the designer brands, but in these days of recession and cutbacks this is simply not possible. A family on benefits may have less money per week to live on than the cost of the Nannette dress. Clearly Kate is not wearing clothes that we can all afford. 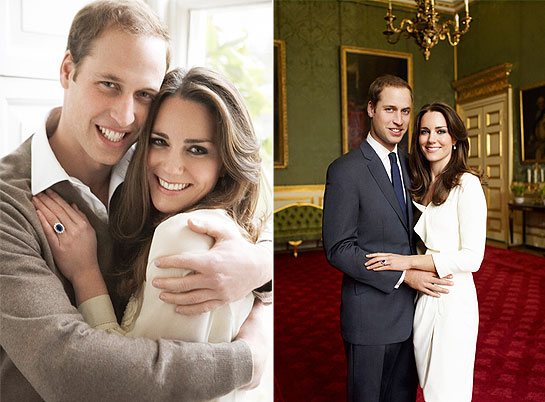 Kate is in the middle of planning what has been hyped as the wedding of the decade. Finding a new, fashion-forward look is probably not her most urgent priority at the moment. Therefore it makes sense to stick to clothes that she knows and feels comfortable and confident in. We all do this, have a fail safe outfit that we know we can turn to when we need to look good – why should Kate be any different? When she does wear something new, like the Alice Temperley dress that she wore to the teenage cancer trust event in December, she faced criticism that ranged from her wearing tights with the dress, even though Britain was freezing in miserable temperatures at the time, that the dress was too summery, and that she didn’t look as good as Hollywood actress Kerry Washington, who had worn the dress previously. 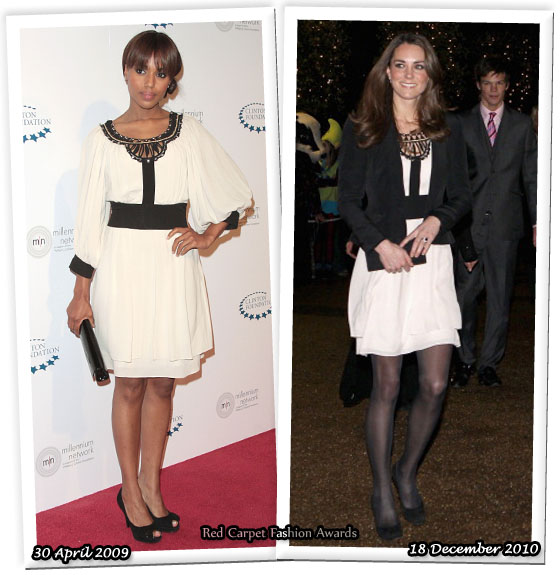 And this highlights another problem facing Kate. Maybe she shouldn’t be wearing clothes we can all afford, but does she want to be dressed like Cheryl Cole or Kerry Washington either? Key designer wear is often much worn and photographed on the red carpet, sometimes in different shades, sometimes with slight modification, but overworn just the same. Kate will need exclusivity in the designs she wears, but does that then make her a mere clothes horse? And what exactly is to stop the High Street picking up the design and copying it, like Tesco and Peacocks did with the Issa engagement dress? Hence she ends dressed like the rest of us after all!

Kate should be applauded for how she is boosting the British High Street, connecting with the British public by wearing brands that are well-known and  accessible. Tesco, Peacocks, Reiss and Whistles have all benefited from the Kate association. Thrifty Kate is being called a Princess for budget cuts Britain – and this isn’t a bad thing.

This week Kate has faced further scrutiny for her outfit that she wore to lunch with Camilla Parker Bowles. The outfit was a nice mixture of designer and High Street, which should’ve pleased all corners, but this wasn’t the case. Journalist Liz Jones dissected the outfit, and whilst approving of the Diane Von Furstenberg dress, she was not so impressed with the Whistles jacket, the thick tights or Kate trademark High leg boots. Even her small Mulberry clutch came in for a drubbing for being too small for a daytime occasion.

I personally think that Kate is looking great. She may not have impressed the media fashionistas yet, but watch her go. She’s be a clothes recycler, but so are all important style icons. Kate Moss has worn her denim shorts, leopard print coats and Minnetonka boots over and over again, Alexa Chung constantly re-uses her Mulberry bags, and Princess Diana was the Queen of restyling outfits, even wearing her peach going away outfit again on a tour of Canada a few years after the wedding. Real style is timeless and does not need to be discarded once its particular season is over.

One thought on “Kate Middleton – The clothes recycler.”