I must be getting old! I used to be able to dance the night away, from dusk til dawn, and then get up and do a full days work. I used to like nothing more than a great night out, meeting friends, eating, drinking and frankly being merry. But now nothing makes me happier than a night in, with a great takeaway, a nice bottle of wine and something seriously good to watch on the TV. And I think the TV might just be the key to why I now enjoy this so much.

Television now is a global event, opinions on TV programmes shared on Twitter in live time, plots discussed and dissected, and sometimes even spoiled by social media. Viewers benefit from the range of channels, the opportunity for live pause and rewind and catch up options (check out the Talk Talk TV packages that are currently available), all allowing us to watch what we want, when we want. And with some real classic TV in 2013, and more to come as the year progresses, I’ve become telly addicted all over again.

Here are a few of my current highlights.

With the serial killer unveiled in the opening episode, The Fall turned all the usual conventions of crime thrillers on their head. An ice-cool, some would say freezing cold, heroine played by Gillian Anderson totally captivated as she lived her life like a man, using a rather dishy detective for sex, sleeping in the office as the case progressed, all the time giving the impression that she was the only person capable of solving this case. The series ended on a massive cliffhanger, with the killer on his way to a new life, a new destination, and probably new victims.

For all those who say you should watch TV, rather than read TV, then please just watch the opening episode of French drama, The Returned. A beautiful village in the Alps suddenly sees its dead returning, starving and with complete amnesia about their deaths. Years have past, but the ‘returned’ are stuck in time, preserved at the age they left, and both terrifying and astonishing their loved ones. So many questions were raised by the opening episode, that I spent the next half hour googling the series. 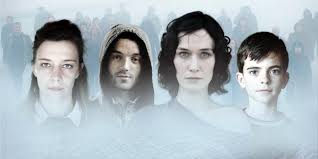 Set in the early 1980’s, just before Richard’s premature death, Burton and Taylor is a much-anticipated programme for anyone with interest in one of Hollywood’s greatest love stories. Rather than Lindsey Lohan (please!), we have the super talented Helena Bonham Carter as Elizabeth Taylor, and Dominic West as an uncanny Richard Burton. Planned for screening at the end of the year, I cannot wait to see this!

My guilty pleasure, Made in Chelsea keeps me entertained, amused and hooked every single episode. I love the smarminess of Spencer, Millie, Rosie and Lucy and their fabulous sense of style. I giggle at the bromance between Proudlock and Francis, constantly engaged in chasing the same girl, and just love the way the characters/actors, whatever they are, all take off at the drop of a hat and holiday somewhere amazing with all these people they seem to really hate. A real soap opera couldn’t be any more amazing than #MIC.

4 thoughts on “Why staying in is the new going out.”