No-one ever really tells you just how expensive it is being a parent. As well as the clothes and toys, the food, the holidays, the school expenses, you also have to think about all the extra-curricular activities that help your child to develop as a person and give them so much fun and satisfaction.

My little boy Joe is 6 and currently takes part in football coaching, karate lessons and swimming lessons which cost nearly £20 per week. For some parents, in these days of budget cooks, food banks and austerity, these added expenses would be an expense too much, and so, consequently, some children miss out on these fabulous, life enhancing experiences. Which is why the Kallikids Sponsored Child project is such a brilliant idea.

Kallikids is the UK’s accreditation for children’s activities and services site used and trusted by parents across the UK. It offers information about clubs, services and tutors, much of which comes directly from parent’s recommendations. This year it is offering 85 sponsored child places that will give the successful applicants the chance to try a range of activities for free. These include the swimming, football and martial arts classes that my Joe so loves, as well as opportunities for extra tuition, yoga classes, even life classes. 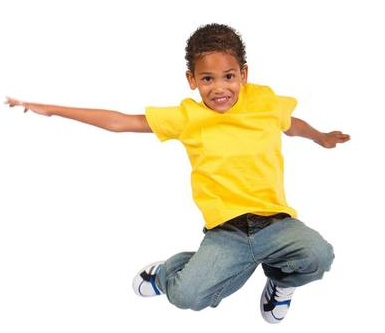 If you would like your child to be considered for a sponsored child place, you can find out more information about the counties covered and fill in the application form here. The closing date for applications is 20th February 2015, and successful applicants will be announced in March. You can read about some of 2014’s success stories here.

Having to go to hospital is scary at any age. The strange smell, the noise from machines and equipment and just the general unease about what is going to happen to you all go together to make hospitals something that most people are a little fearful of. A trip to hospital for a child is even more frightening especially if that trip is for surgery or involves a blood test or X-Ray. But a new resource created by a mum on a mission, is aiming to make the hospital a slightly less daunting place for infants. 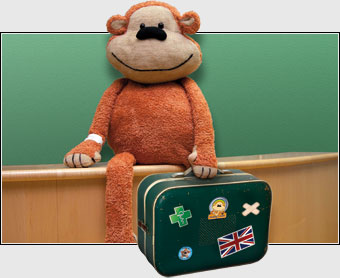 The Monkey Wellbeing resources have been created by Helen Saddler. She wanted to make her 18 month old daughter’s operation stress free, and did this by creating a true life book showing all the different parts of a hospital, the sights, sounds and smells, and all the different people you meet in a hospital setting. But what made this book so child friendly is that everything is being seen through the eyes and mind of a rather adorable monkey who is about to have an operation. Monkey asks all the questions that a child might ask, and so these questions are answered in a very child friendly form. 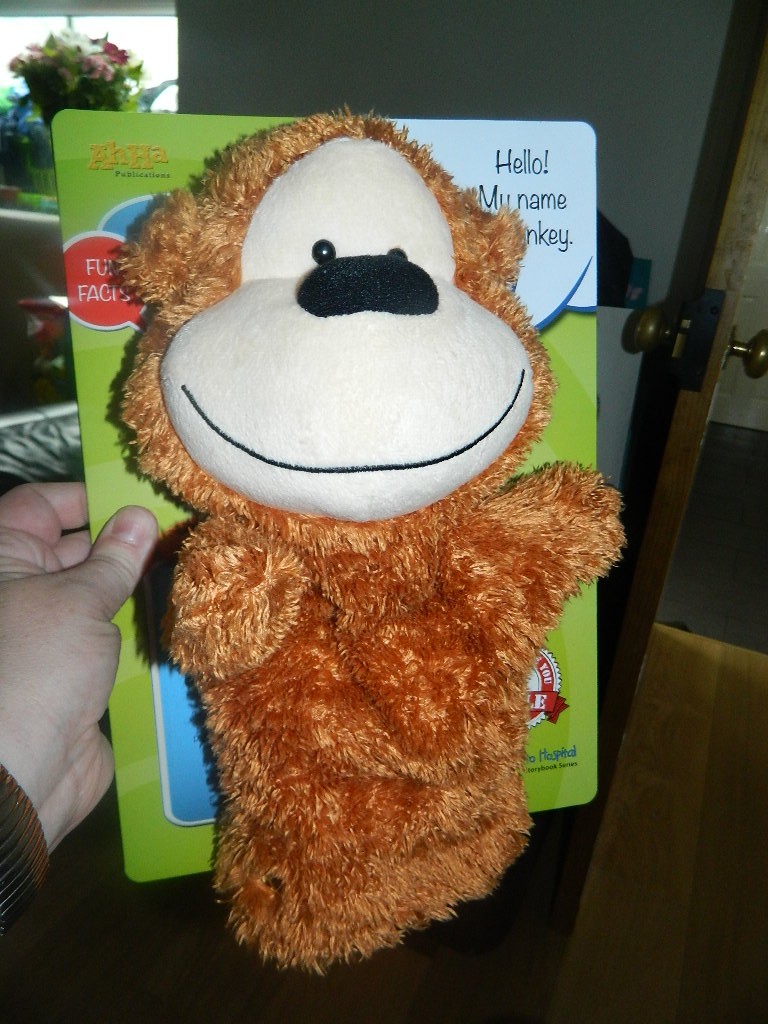 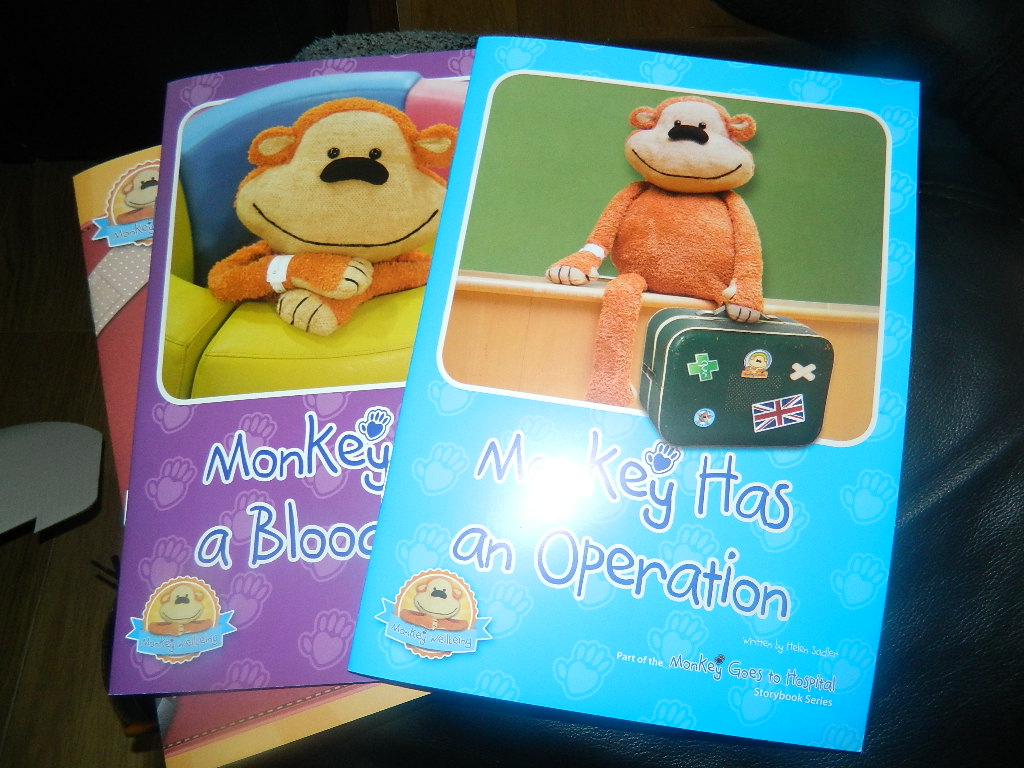 I was sent a set of the resources to share with Joe, my five-year-old. Joe has spent time in hospital in the last few years due to suffering with viral tonsillitis which causes dangerously high temperatures. On his last visit he experienced a chest X-Ray, numerous blood tests and examinations and had his temperature taken daily. I thought it would be interesting to see how he reacted to the stories and monkey, and whether he would recognise any of his own experiences in Monkey’s story.

Joe fell in love with Monkey. He loved the fact that it is in puppet form (he is currently obsessed with Sooty so this may explain why). Puppet form means that an adult can use it to tell the stories but Joe liked to work it himself and kept commenting on just how cute and cuddly Monkey was. He also decided to call it ‘Milkshake Monkey’ after a famous television character from Channel 5. 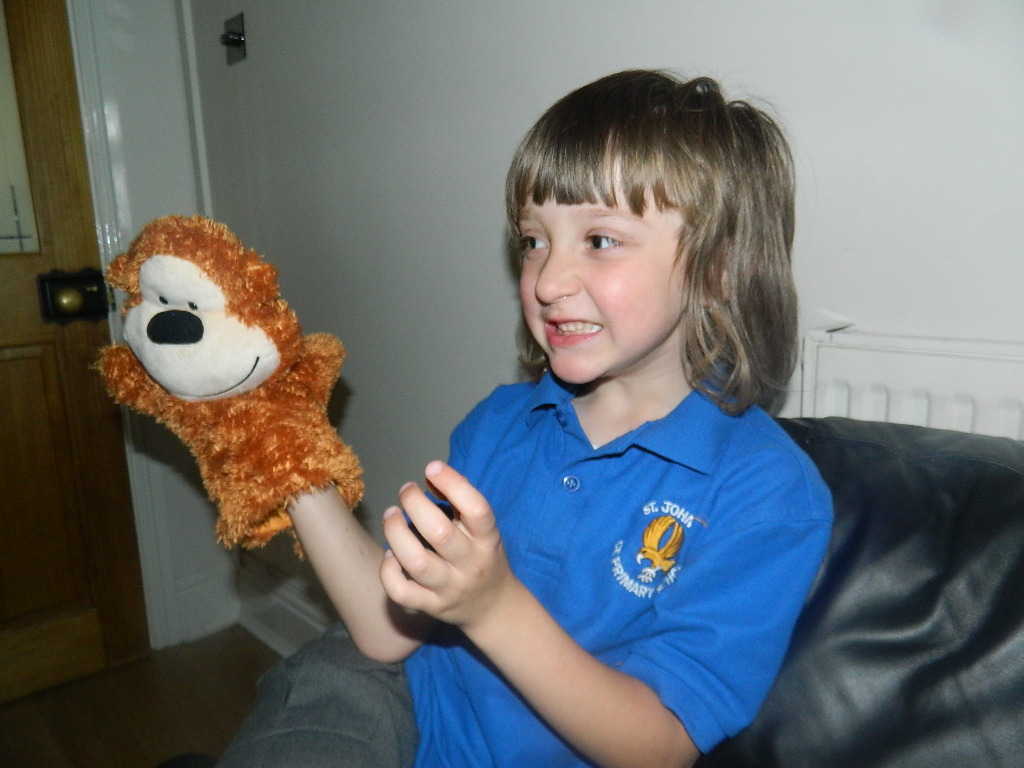 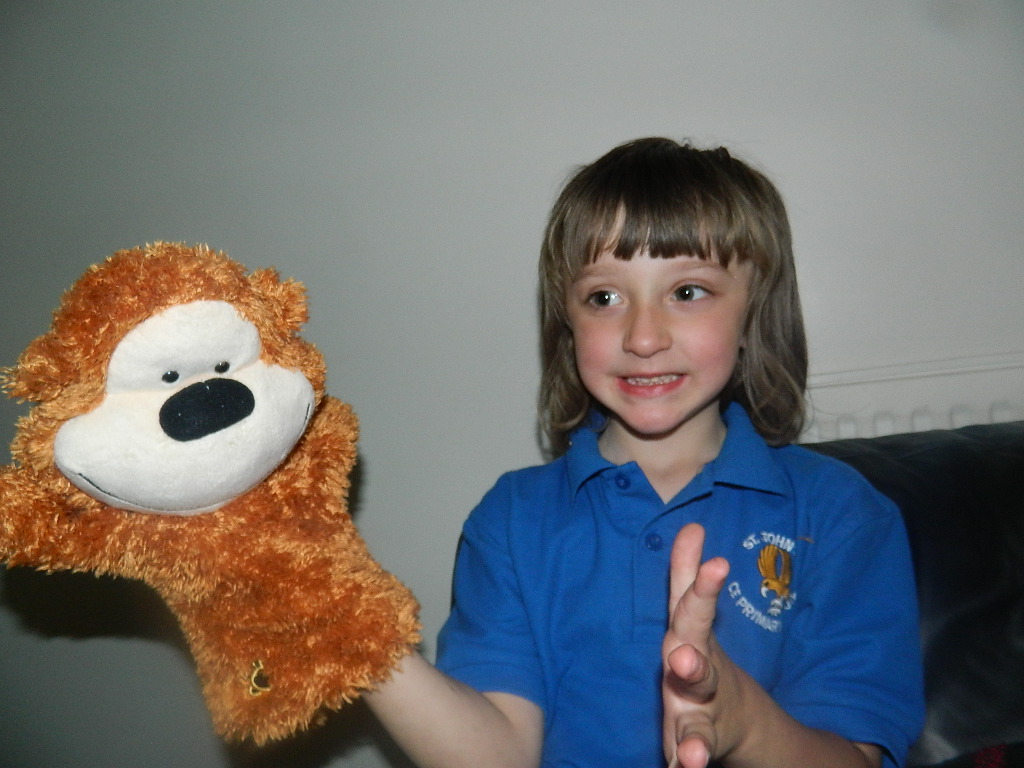 He also loved the books and totally identified with what was happening in each story (the second concerns Monkey having a blood test – something that Joe had last year.) He was able to discuss when he had his blood test – he remembered the freezing Jelly and that this stopped his hand from hurting when the needle went in. Joe was also really interested in the story of the operation, wanting to turn the pages quickly to see what happened next.

There are further resources in the pack including stickers and an activity book containing games and information sheets. These make this a great classroom resource as well as great fun to use at home. I really hope the series continues to grow – an X-Ray experience book would be another great idea. 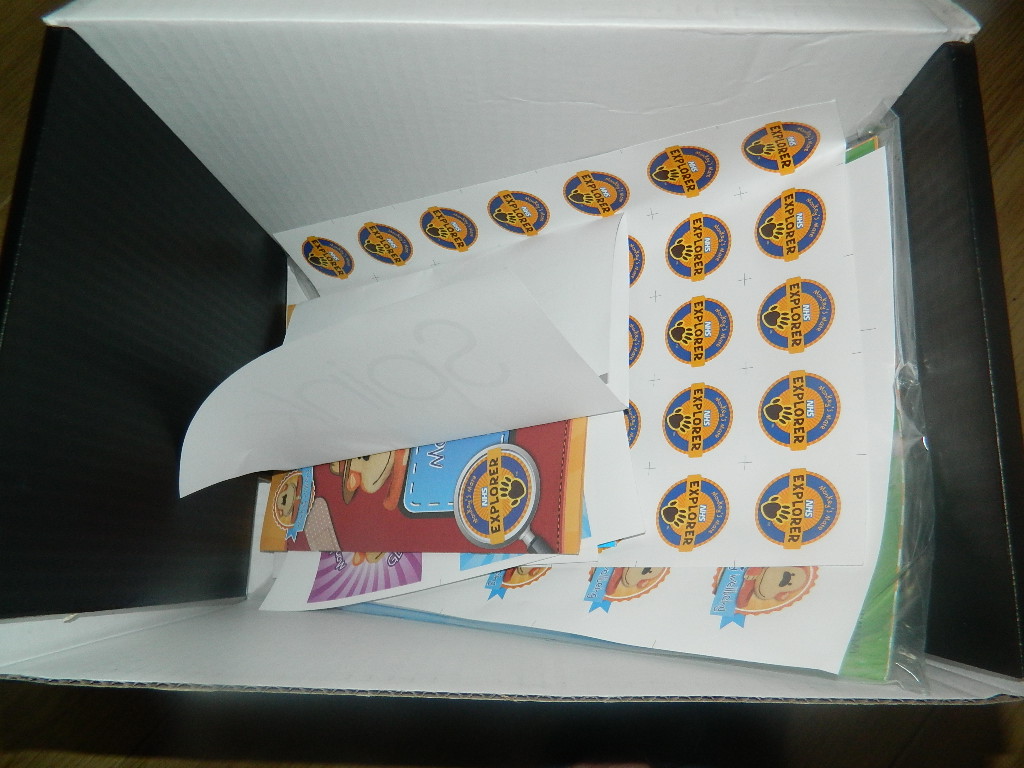 To find out more, visit the Monkey Wellbeing website http://www.monkeywellbeing.com/

Last year I wrote a review of some of the fab toys from the Power Rangers range that were enjoying a resurgence in popularity due to a new TV series. The review proved to be very popular and showed that since the 1990s, Power Rangers had never really disappeared from the hearts and minds of kids young, and not so young.

The lovely people at Bandai have recently sent Joe some more of the range for review. As a huge Power Rangers fan he was very excited to receive some of the role play items, as well as a couple of the action figures.

Power Rangers Megaforce Basic Ranger Training Set
Currently Joe is very into role play, and Power Rangers is one of the games that he enacts with his friends in the playground. So the Power Rangers Megaforce Basic Ranger Training Set was a brilliant choice for him. The set comprises of a Red Ranger mask,a Firing blaster with two Zord rounds,6 battle cards and a Card Holder Belt Buckle to store your cards in. The pieces all come in a strong, durable plastic that ensures that they can be subjected to rough and tumble games without falling apart. I also liked the fact that the firing blaster is both easy to use, and safe – the blaster doesn’t really blast but just gently pushes out. This is hours of fun for your little Power Ranger, but you may find it difficult to get them to remove the mask when you want to pop to the supermarket. 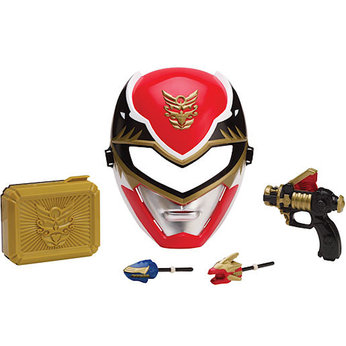 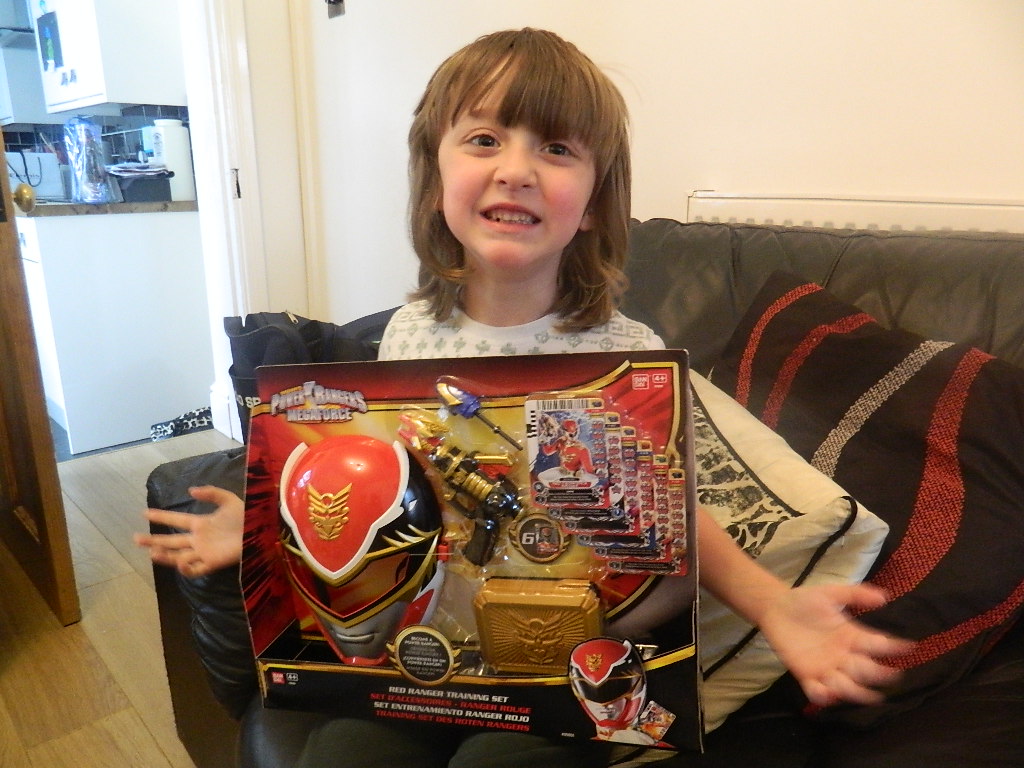 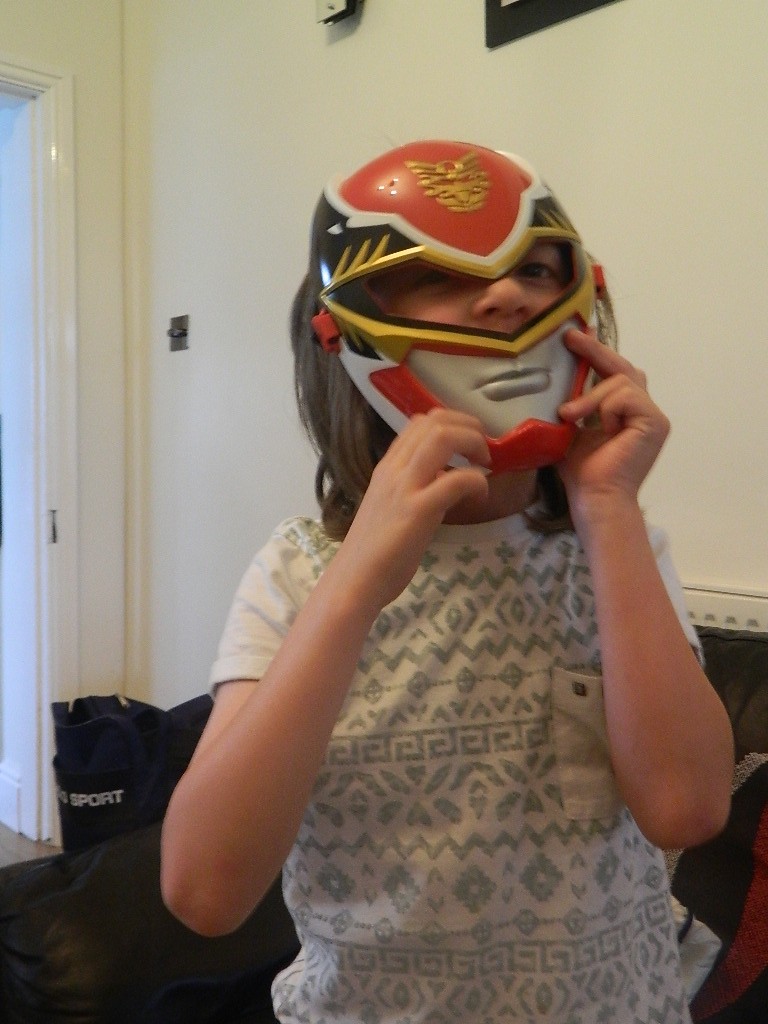 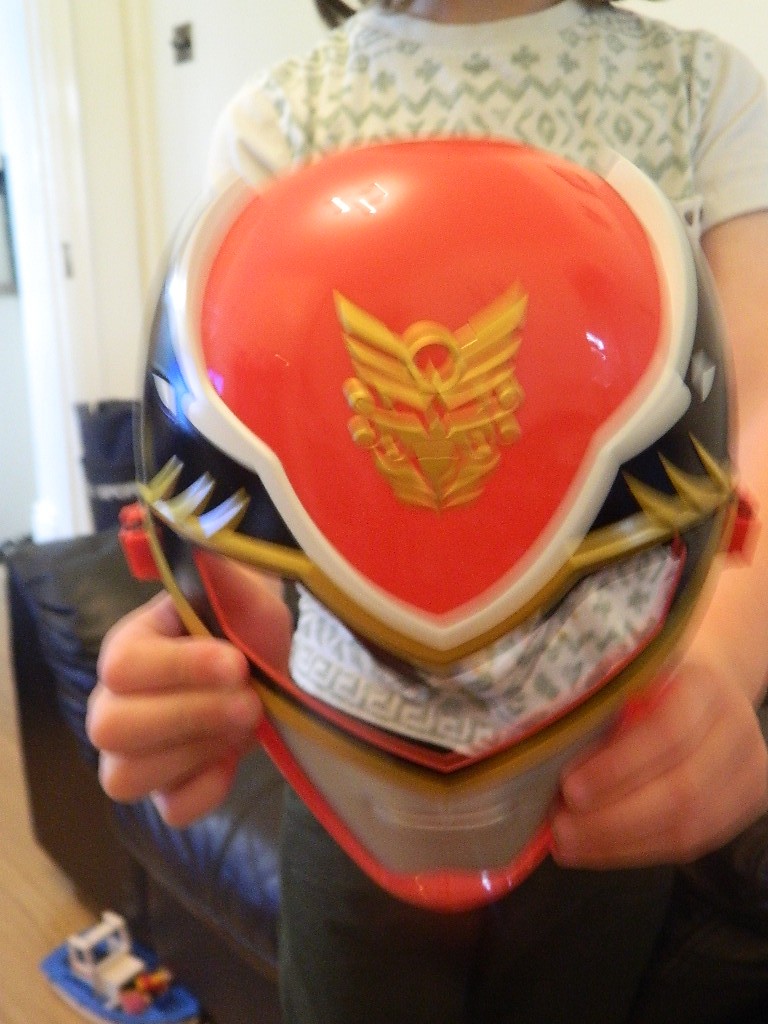 This item is another from the role play range. I have to say I was a little unimpressed with this. It makes sounds and you can put the play cards into it, but it is really like a toy mobile phone as it doesn’t read the cards, and the sound is quite low in volume. That said, Joe liked it precisely because it did look like a mobile – that is exactly what he used it for, and it added to the basic training kit as another part of the Power Ranger uniform. 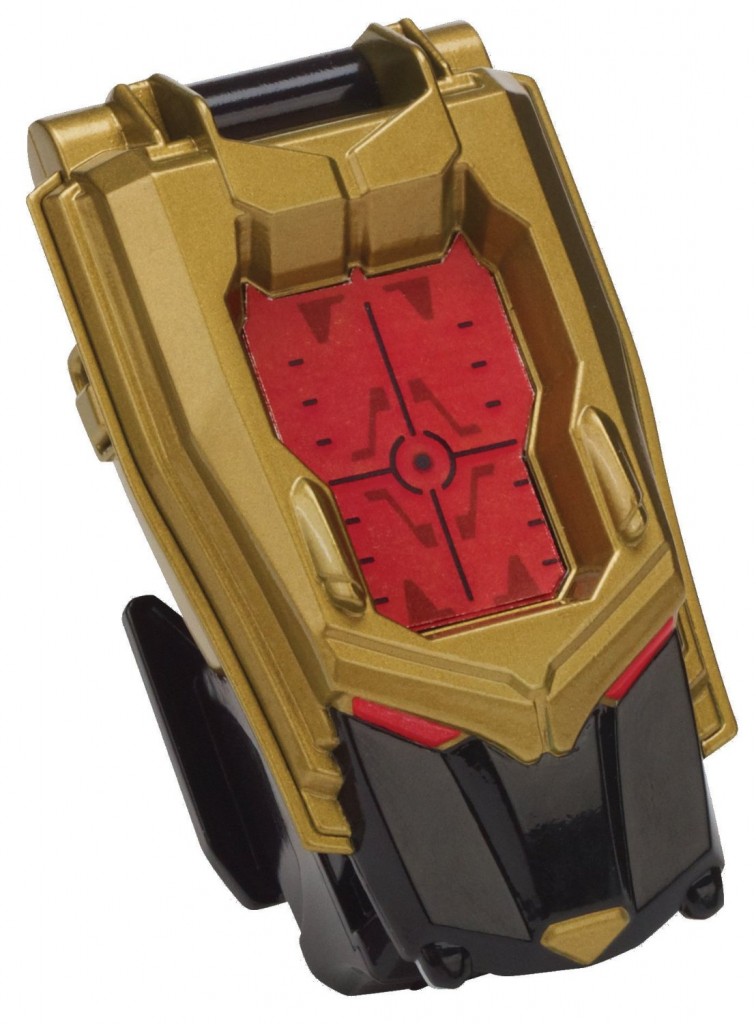 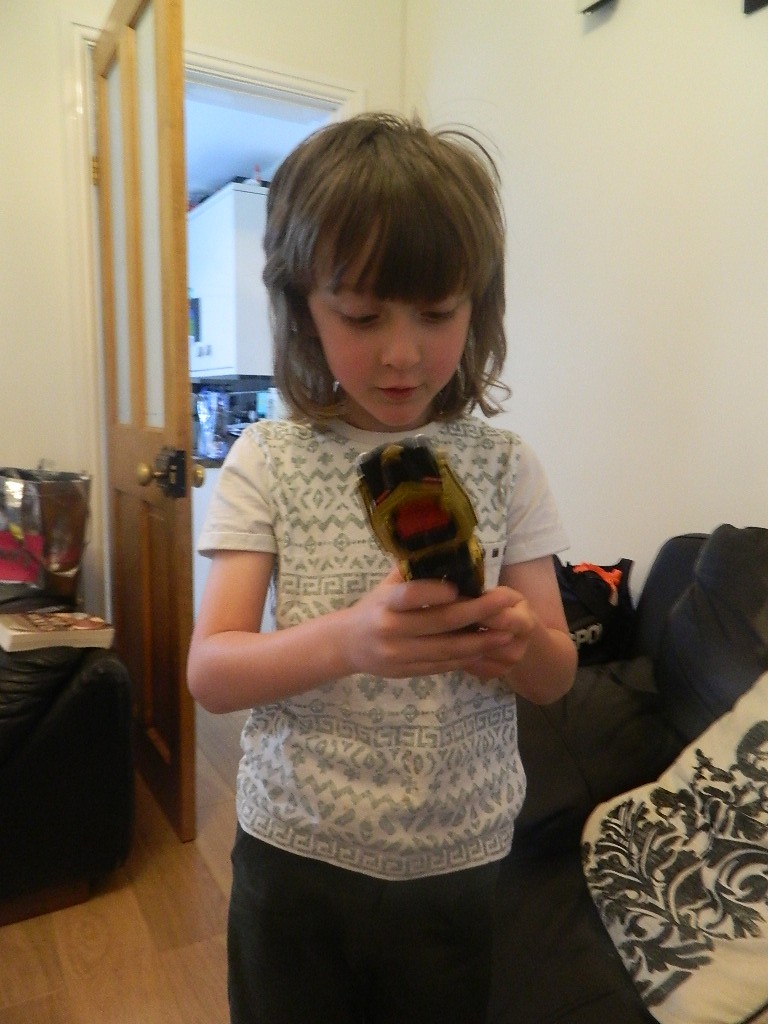 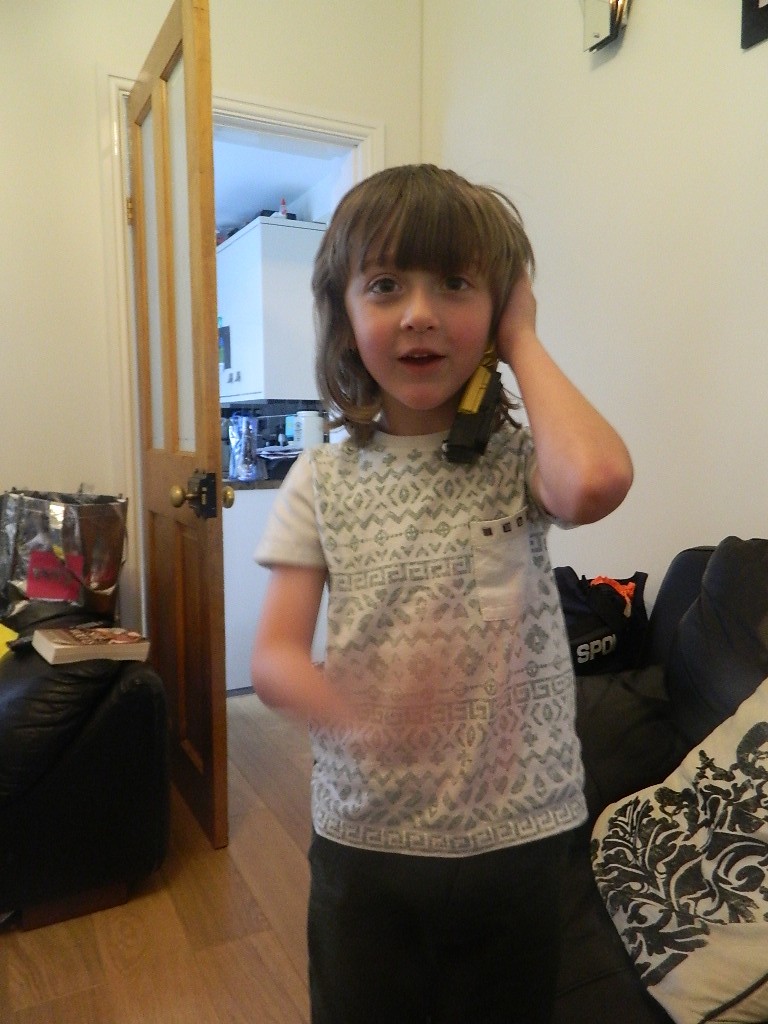 Of course, no review of Power Rangers would be complete without a look at a couple of the pose-able action figures. Joe was sent the Megaforce Action figures in red and black. These are 10cms tall and are again in toughened plastic. The figures are totally articulated so children can easily put them into lots of different poses and positions when they are doing battle. The figures also come with accessories like swords, shields etc, and these are fairly easy to affix to the figures.

Joe loves his Power Ranger figures and is getting a lot of pleasure from planning scenario’s and setting up battles. You can currently get three figures from Amazon for £19.82, click here to see the offer.

With thanks to Laura from Mischief PR and Bandai toys for the review opportunity.