This article should really be titled ‘The feel good event of the year’. The Baseballs played their first concert in Birmingham tonight, and Fashion Mommy was there to enjoy the ride. For those of you who’ve spent the last few months under a rock, The Baseballs are a German Rock and Roll band who have built up a huge following with their interpretations of modern pop songs in a rock and roll stylee. They have the personal style of James Dean, with the most impressive quiffs since the Leningrad Cowboys. They are style personified, with great tunes and an equally stylish audience.

The Birmingham O2 Academy was the venue for tonight’s gig. This was the first time Fashion Mommy had been to the Academy since it had moved from its previous home in Dale End. For those who haven’t paid a visit yet, I can safely say that the new home has the same distinctive smell of the previous Academy, that of beer, sweat and toilets. However, it does have a shiny new decor, and the air conditioning works, so we thank heavens for small mercies.

The Baseballs have a very 1950’s feel to them, taking influences from Elvis and Eddie Cochran, along with the sounds of the Do – Wop bands from the era. Because of this, they attract a very stylish audience who dress to suit the music of the Grease era. There were lots of women in full skirts and crisp shirts. Leopard print in Rizzo style was also popular, as were headscarves in a range of colours. The cover ups for the crisp Autumn night outside were mainly of the vintage faux fur variety.

The Baseballs themselves started the evening in classic denims and leather jackets a la Danny Zucco and The Fonz. This tied in perfectly with this seasons fascination for all things leather (look at Burberry for designer versions and Topshop/Topman on the High Street for examples of this look). Midway through they took a costume change and returned in Rockabilly plaid shirts for an a capella version of Leona Lewis’s ‘Bleedin Love’. This was another fashion look that was popular with the audience, as many men and women were sporting checked and plaid shirts open over vests and tees.

The band members are totally charming, and any women in the room who weren’t in love with them before the gig, certainly were by the end of the night. In short, they charmed the pants of the female half of the room with their talent, wit and charm. This was further compounded when they introduced two lovely Bettie Page lookalikes from the audience to dance with them on stage.

Everyone in the room had a fantastic time, and the final flourish to add the icing onto the top of a perfect cake for any fashionista was the merchandise store. No tacky huge t-shirts for The Baseballs, instead their were cute 50’s style stripy tops with ‘Lola’ emblazoned on the front, and pretty tote bags. I plumped for the bag – I’m not a t-shirt person! 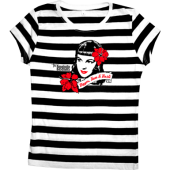 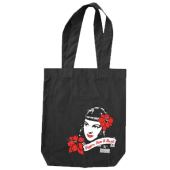 The cute bag I opted for