It’s been described as an ‘explosion of the senses’ and ‘an explosive concentrate of masculine sensuality’.  Today Viktor and Rolf fans will get the opportunity to experience the exquisite new fragrance that is ‘Spicebomb’ when it is prelaunched exclusively at Harrods.

Spicebomb is a male counterpart to the delightful Flowerbomb, long a favourite fragrance of mine, created by master perfumer Oliver Polge. It is Oliver Polge who is also the mastermind behind Spicebomb. And whereas Flowerbomb is, as suggested by the name, a glorious explosion of fragrant bouquets, Spicebomb is a much more heady aroma that includes a cacophony of spices, from the mystical eastern aromas of chilli and saffron, the masculine aura of tobacco and leather, and zesty vibrant scents of bergamot and grapefruit. Finally, the scent is completed with the addition of pink pepper and elemi.

I was lucky enough to have been sent a very precious sample of Spicebomb in December. The first thing that strikes you about Spicebomb is the bottle, a gorgeous grenade complete with pin that adds the Wow! factor from the minute you take it from the box. The fragrance itself is very distinctive, the spices coming to the fore to make this a very expensive smelling fragrance. It is the sort of scent that has people asking ‘just what is it that you’re wearing’, and, most importantly, the scent has longevity, it will last all through the day without needing to be reapplied. It is a warm, sensuous fragrance that lingers in the air and in the senses, leaving a powerful impression of masculinity.

Spicebomb is available from today from Harrods, and will be available nationwide from 7th March 2012.

British fashion is an exciting place to be in at the present time, the buzz that surrounded London Fashion Week this year, with its amazing collections and starry front rows, showed that London is once again the capital of the fashion world. And Nicole Murray is primed to become one of its brightest stars. At just 24, she has already seen her first collection sold exclusively through Harrods as part of the ‘Harrods launches’ platform, has received plaudits and acclaim from both the notoriously picky fashion press and celebrities, and is set to be one of the standout collections of the soon-to-be launched website watch-that-label.com.

The Nicole Murray line was first launched in January 2010 and specialises in beautifully constructed, luxurious women’s ready-to-wear. A graduate of the London College of Fashion (previous alumni include Jacques Azagury, Patrick Cox, Ashley Isham and Jimmy Choo),  Nicole was awarded the Harold Tillman Scholarship for Young Designers, the English Eccentrics Bursary and graduated with a distinction. Then followed that amazing first collection for Harrods.  Grazia was amongst those who showered the praise,  saying “block colour ensembles and 40’s glamour was perfectly executed by Nicole Murray”.

A second collection, for Spring/Summer 2011 was also warmly received and led to Nicole signing an exclusive deal with eagerly anticipated online fashion retail site watch-that-label.com. This site will see Nicole’s collection sitting alongside such luminaries as Emilio De La Morena, Josh Goot and Louise Goldin, with a concentration on the best and brightest of new labels and fashion designers from around the world.

Nicole showed her A/W 2011 collection as  part of  the Vauxhall Fashion Scout during London and Paris Fashion Weeks. Her new collection shows her commitment to producing clothes of timeless elegance with a contemporary twist. Using a pallete containing purple shades of heather, amethyst and rosewood as a basis, but with deeper tones of bronze and chestnut browns to add a touch of the dramatic, Nicole has produced a collection that has simple,minimalistic lines, but with fluid sophistication.

Nicole with her A/W 2011 collection

Silk and wool are teamed with leather detailing such as belts, collars and straps to create garments that retain femininity without being too girlish. This is glamorous dressing, without  ruffles and frills, but with a grown up sophistication that is sure to find favour next season. The fabrics used have the added attraction of being made in England.

Nicole’s  collection will soon be available at www.watch-that-label.com. For more information,visit the Nicole Murray website www.nicolemurray.co.uk 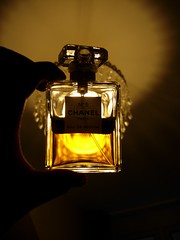 Fashion-Mommy was lucky enough to get to see ‘The Perfume Diaries’ exhibition that was showing at Harrods recently, and I am pleased to say that it both looked, and smelt amazing.

Perfume has been with us for a long time, far longer than I would have believed, and the Harrods exhibition was a celebration of this fact. There was a selection of herbs and flowers that go to make up different perfumes, and a selection of vials that you could smell, although some of these were extremely strong, a bit like smelling salts.

Every top brand was featured in the exhibition, which was designed like a timeline to perfume. The perfumes and perfumers were featured in chronological order, and it was surprising to see that some perfumes had been with us for so long.  I love Floris fragrances, and could not believe that this brand had been with us since the 18th century. Je Reviens – a favourite of my mom’s was shockingly revealed as a turn of the century fragrance. Whilst the fabulous Tresor by Lancome has been around since the 1950’s.

There was a great display to the amazing Elizabeth Arden, one of my absolute heroines. I couldn’t survive without her eight-hour cream, whilst Red Door is a favourite fragrance. I always remember my best friend Dawn wearing ‘Blue Grass’ when we were younger and it is a smell that evokes pleasant memories of youth for me.

The exhibition was extremely pretty, and what made it more so was the additional displays that helped to illustrate the fashion timeline of the each era. There was a beautiful Dior dress to illustrate the 1950’s, along with a giant Ferragamo wedge shoe. There was an original pair of shoes belonging to Judy Garland, and a film which featured Marilyn Monroe, who allegedly slept in Chanel No 5. The 1960’s display sported a stunning 1960’s Pucci dress in a vibrant print, whilst the 1980’s Halston dress in midnight blue sequins screamed the decadence of Studio 54.

The modern section showed the rise of the celebrity perfumes, with Kate Moss, Victoria Beckham, Sarah Jessica Parker and Jennifer Lopez all featured, along with the immortal Elizabeth Taylor, who kickstarted the celebrity sprays.

At the end of the exhibition, you felt that you needed to buy perfume. Maybe you’d rediscovered an old favourite, or found a new one. Either way, you had to pay a quick visit to the Harrods perfume department on your way out…