And the awards bandwagon rolls on. This time it was the SAG awards, which, traditionally, is a slightly more dressed down affair than the Golden Globes and The Oscars. On this occasion though, there were some really nice dresses, although nothing that would actually make you gasp. Very bright or black and white seemed to be the order of the night, although there were some notable additions of sparkle from Helen Hunt and a sizzling Naomi Watts. Here are some of the key trends, the style winners and losers from a glamorous night.

Also doing the shimmering goddess very well was Helen Hunt. Her Romona Keveza gown was a masterclass in dressing a slim frame, her body looked just amazing and she accessorised perfectly with more bling. After her gorgeous Philip Armstrong dress, I think Helen is having a real style moment.

The ever beautiful Jennifer Garner also went for a glittering look, this time in a gold Oscar De La Renta column dress. If it had been the Oscars I would’ve said she was dressing to match the statuette, but as it was the SAG’s, I’ll just say she looked fabulous.

Mad Men’s Peggy, Elizabeth Moss, looked undeniably chic in her black Dolce and Gabbana dress. I adored her bobbed dark hair and think this is the best she has ever looked. However, I love to see a full length dress on the Red Carpet for major awards shows, so I sort of wished this was full length. 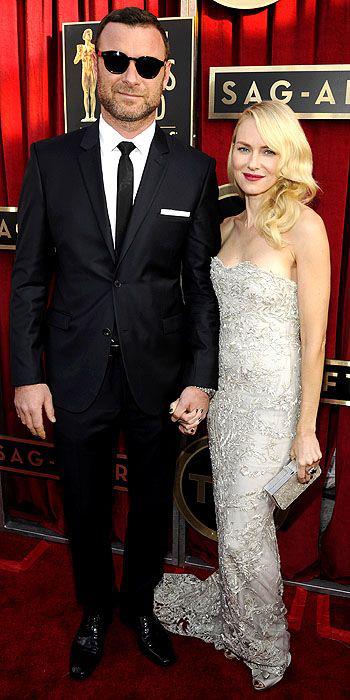 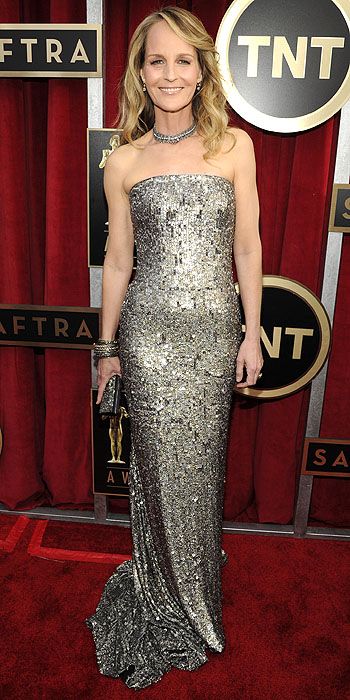 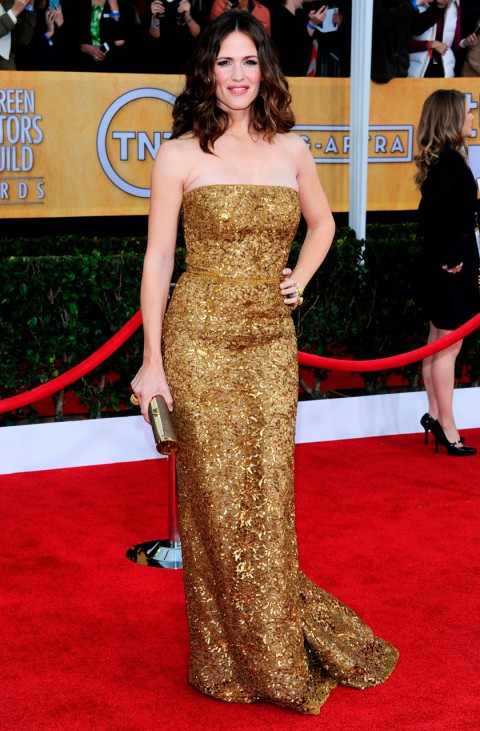 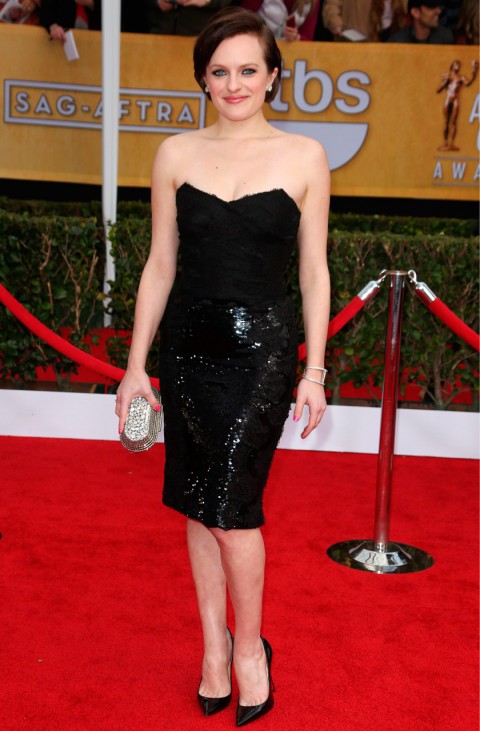 Colour featured heavily on this red carpet. There were blue and navy shades, red, lots of pink and shades of green. Jessica Chastain was positively Jessica Rabbit on the red carpet in a scarlet Alexander McQueen dress that was one of her best looks ever. She was absolutely flawless in a dress she could’ve been poured into. Nina Dobrev channelled simple elegance in her pink Elie Saab dress which was a definite hit. Frieda Pinto also went for a hot pink shade in Roland Mouret, but I thought that the draped neckline was both fussy and frumpy, making this a rare fail for both Frieda and Roland. 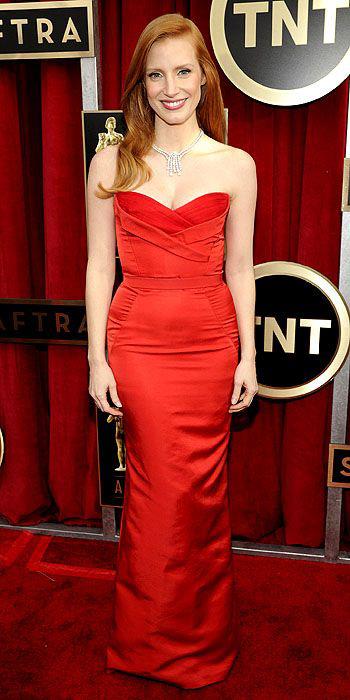 Marion Cotillard was just divine in another Dior creation, this one in mid blue and white. From head to toe, she looked incredible, and once again showed Jennifer Lawrence how to wear Dior. Jennifer was also wearing the designer, and also wearing blue, this time a navy shade, but this was a terrible choice. Containing lots of strange folds/tiers and looking a little unfinished, this was the case of great colour, bad dress. 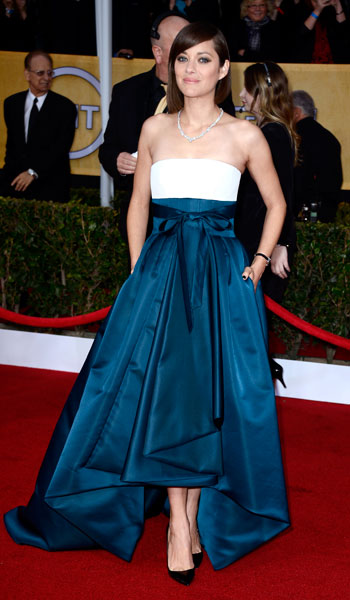 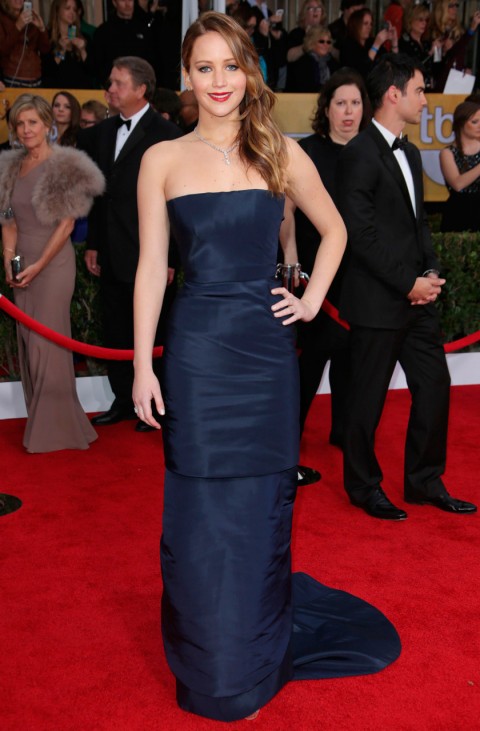 Nicole Kidman also looked great in a Vivienne Westwood navy beaded sheath.  This dress reminded me of Cher wearing something by Bob Mackie in 1973…and yes, that is a good thing. Completing my blue group was the gorgeous Amanda Seyfried, who also scored serious style points in navy Zac Posen. The dress and hair were retro glamour (and frankly – how amazing is that hair!), but the long necklace added a youthful vibe to the look. 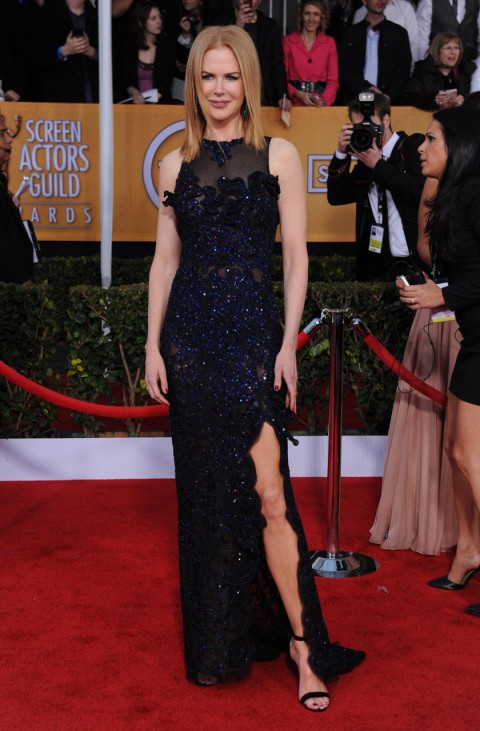 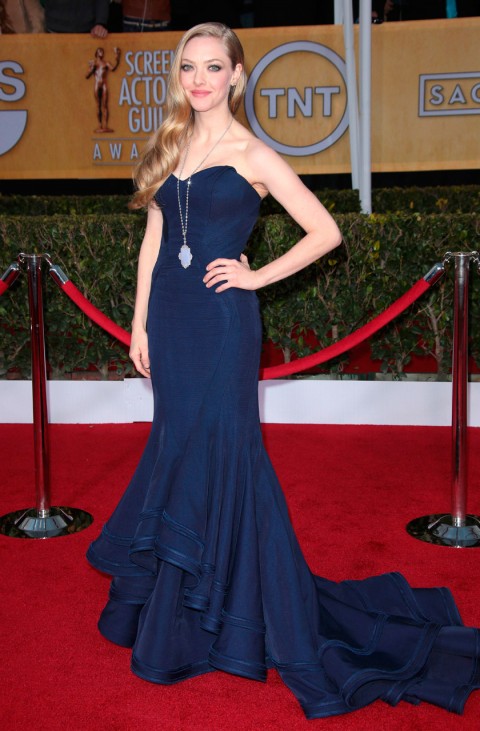 Black and White/Good and Bad

There were black dresses, there were white dresses, and then there were black and white dresses. Some were amazing, but some were not so, and that was surprising considering who was wearing them. Top of my frocky horror stars was Julianne Moore. She was so perfect at the Golden Globes thanks to Tom Ford, but when she turned to Mr Lagerfeld, who dressed her in a monochrome, floral monstrosity that was all wrong. A bad shape, and with a deep v front cut so low it looked like she had the dress on back to front. Also making me gasp in horror was Anne Hathaway. Wearing Giambattista Valli, this was all too sheer, making it look like she was wearing cycling shorts underneath. Another real disappointment was one of my style crushes, Claire Danes. Her 1990s inspired dress from Ricardo Tisci for Givenchy looked great in some pictures, but in others it gave the impression that her arm was in a sling – so not a good look. And I wasn’t convinced with her slightly scruffy hair and dark lip colour either – far too grungy for the red carpet. 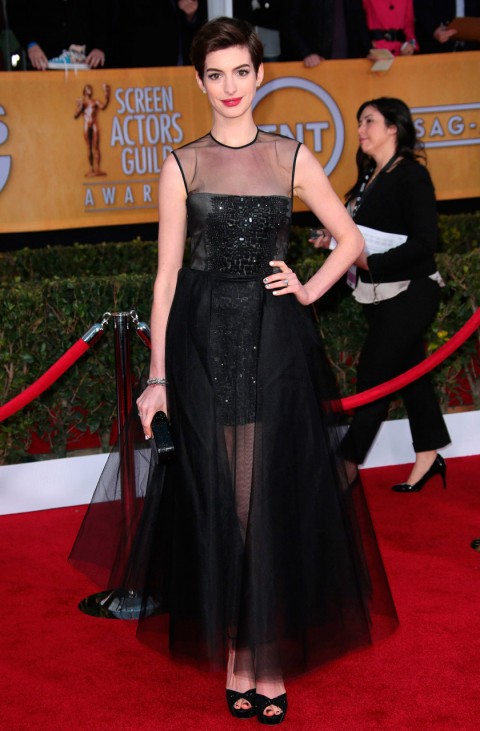 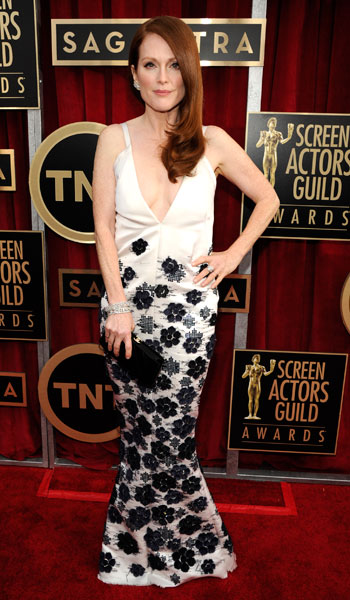 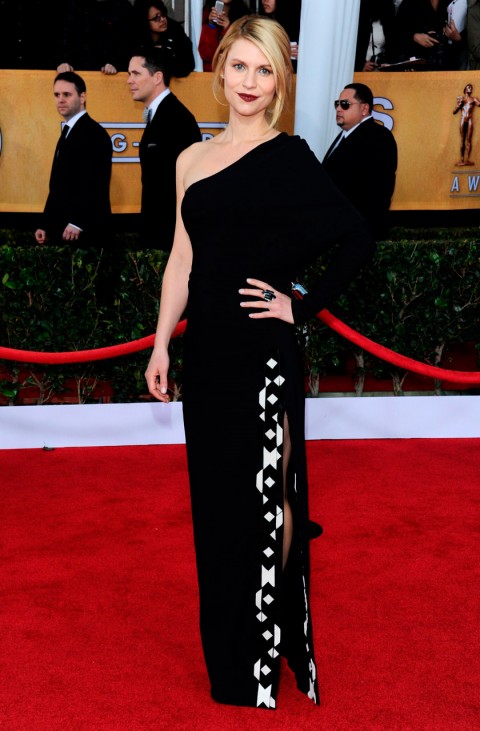 But there were some beautiful looks too. Kelly Osbourne again showed why she is so well deserving of her style icon title in a 1920s style black embellished dress by Jenny Packham. And Kerry Washington chose a Rodarte column dress that required a closer look – the fabric was just so exquisite. 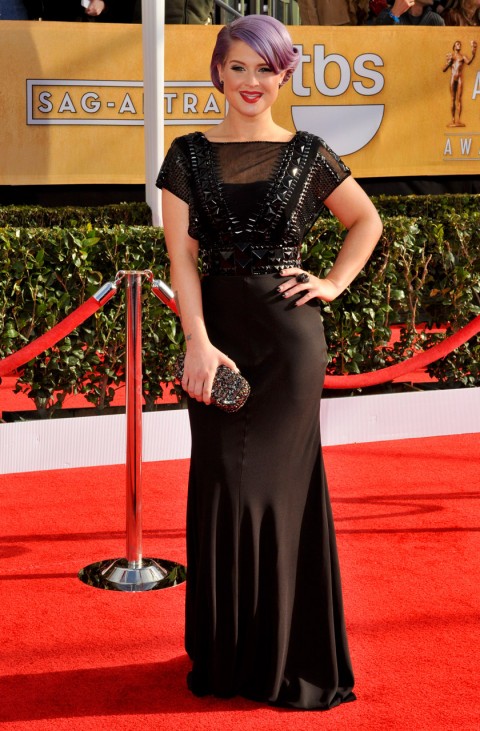 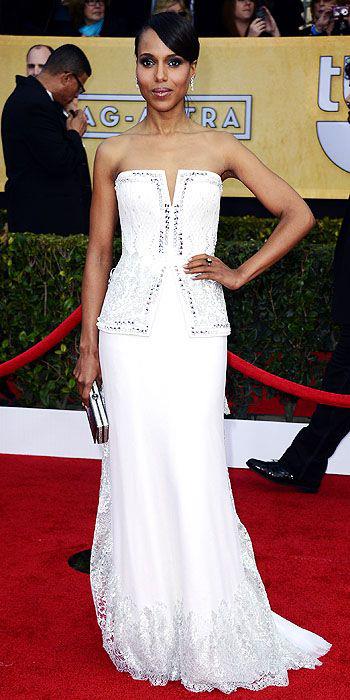 Who’s look did you admire from The SAG awards?

10 thoughts on “The SAG Awards – Pick of the dresses”