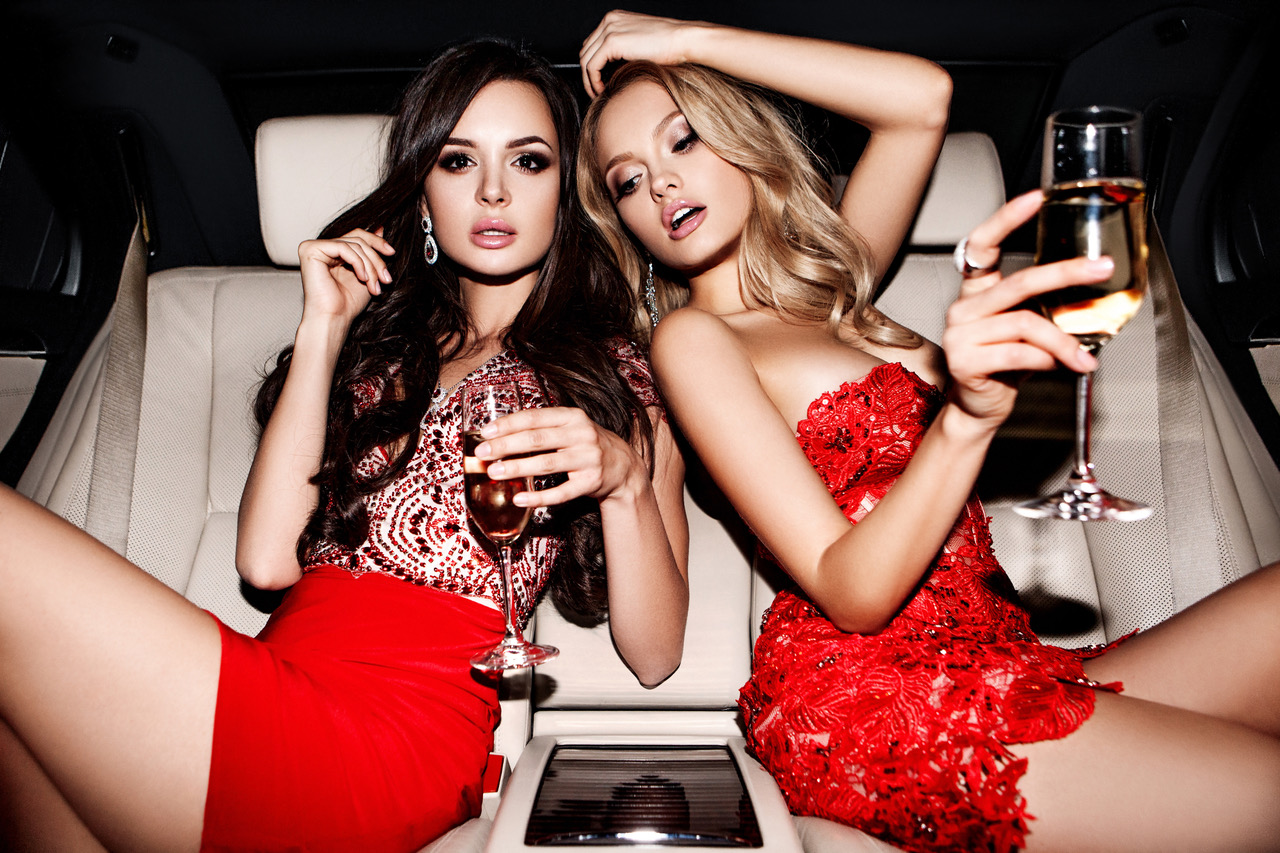 When people think about casinos, it is safe to assume that glitz, glamour and good times won’t be too far from the brain. Picture James Bond; martini in hand, muscular-figure hugging tux and a rising stars of the modelling world on his arm. Then there’s Monte Carlo, the favourite playground of the rich and famous.

The fashion and casino industries are bonding, Moschino presented a splashy Las Vegas-themed collection in LA in early 2017 and several other designers were expected to follow suite.

Miranda Kerr, Hailey Baldwin and Stella Maxwell were among the world-famous models strutting their stuff on the catwalk amid an assault on the senses of bright neon signs. The setting was completed by the sound of slot machines echoing distantly in the background before Elvis burst into ‘Viva Las Vegas’

The show consisted of everything from pin-up girl chic to very tight men’s Speedos, the sequin covered juggernaut came crashing into the casino capital of the world in style. There were dresses and designer Jeremy Scott said: ‘It’s the idea of a showgirl off-duty kind of going home from the casino. She may be just in her jeans, but still has part of her costume on and she’s running, maybe to go get something to eat between shows. I kind of wanted to play with this idea and it’s all with a little bit of glamour and love.’

‘There’s sequins and there’s laces and there’s leathers. A little bit of everything a showgirl in Vegas would need. Even a couple of feather headdresses thrown in for good measure,’ Scott added.

Vanessa Hudgens, Joe Jonas, Lars Ulrich from Metallica and singer Fergie, were all among the well-known celebrities to attend the event; with Fergie saying: ‘We are all driving to Vegas and we’re all getting cowboy hats and we’re gonna have a fun time on a road trip!’

Chanel bets on the runway

Back in 2015, designer Karl Lagerfeld looked to the casino floor for inspiration, setting an entire fashion show inside a constructed casino within the Grand Palais.

Celebrity guests, didn’t just take their seats in the front row; instead they opened the show by walking in and trying their hands at the Chanel-branded casino tables, which took centre stage in the middle of the runway.

Slot machines lined the walls of the space where models mingled and paparazzi pried.

The image of A-listers including Kristen Stewart, Julianne Moore and Lara Stone trying their luck at casino tables in immaculate Chanel couture really captured the essence of Bond in Monte Carlo; showing casinos a desirable place to be.

Although we don’t know if any of the celebs had any luck at the gaming table or if they were using any tips from Casinopedia’s online casino strategies.

Speaking about the show, Lagerfeld said: ‘I like that elegant moment of beautiful people going into a casino wearing jewellery. It’s like a fantasy.’

The celebrities were enlisted to model the 1932 Collection of Chanel jewellery based on vintage designs, with Moore wearing a necklace that glittered with diamonds down towards her emerald gown.

Models were wearing cocktail versions of the famous Chanel suit, complete with ribbons and clasps of pearls.

Although, it has to be said, most of the attention was on the runway guests and their poker face or ability to know whether to stick or twist.

Dress code at land-based casinos varies from casino to casino, with some preferring to keep things casual, encouraging players from all walks of life and levels of society.

However, some still say tradition is a virtue and that on keeping up the strict adherence to glamour and style.

Chief amongst them is Monte Carlo, which has an infamously strict dress code.

To go along with its history, legendary décor and full range of casino tables, the wearing of ripped or stonewashed jeans is not allowed.

Sleeveless T-shirts, tracksuits, sports clothes and beachwear are all similarly forbidden. That’s not to say you have to wear a tux like Bond to get in, but you do have to make an effort.

Whether you’re dressed to kill in haute couture or keeping things comfortable, the real focus of your attention should be on the table.

That’s where the real magic happens. The style, glamour and sparkle of the casino adds to the appeal but the real reason you’re there is to win, and win big; or at least to try and win big anyway!

Who is an inspiration to you? Is there a women who makes you want to high five and say yes everytime she appears, speaks, does something? www.flowersdirect.co.uk have been looking at all the inspirational women there are, and how we like to say thank you to them, they have produced a lovely e book on the topic, and have been sharing the inspirational women on social media using the hashtag #InspiredBy.  They asked me if I would write about a woman who inspires me.

Now, I have a family full of inspirational women. My mom, sister and sister-in-law are all big inspirations on my life and how I live it, and I have friends, and people I have met through blogging who also serve to inspire. But I thought I would make this post about a girl (woman) crush who inspires through her style, her talent, and, to be quite frank, her ballsiness, being a leading lady at a time when most of her contemporaries seem to have faded into the background. I am talking about the astounding Helen Mirren, who continues to shine as a movie queen despite being well into her seventh decade, and always look radiant and interesting, often outshining men and women a fraction of her age. Helen has always been beautiful and sexy, and that remains, even through she is now into her seventies. But her beauty is the natural kind, she embraces her wrinkles and laughter lines as a part of her, and plastic surgery is not on the agenda. In a similar way her style is impeccable, fashion forward yet age appropriate -she doesn’t have to try too hard, she is effortless. I would like to say I would like to be like her when I’m older, but hell, I’d like to have an inch of her style and charisma now.

Helen is not afraid to age for a role (i.e playing The Queen who is a good twenty plus years older than her), and she bucks the trend of older leading men, younger leading ladies by playing opposite male co-stars quite a bit younger than herself…and basically stealing the movie in most cases. Helen shows that life can begin at 40, but doesn’t have to end when you pick up your pension, that you don’t have to resort to a blue rinse the minute you collect your bus pass, and I think that alone makes her an inspiration. 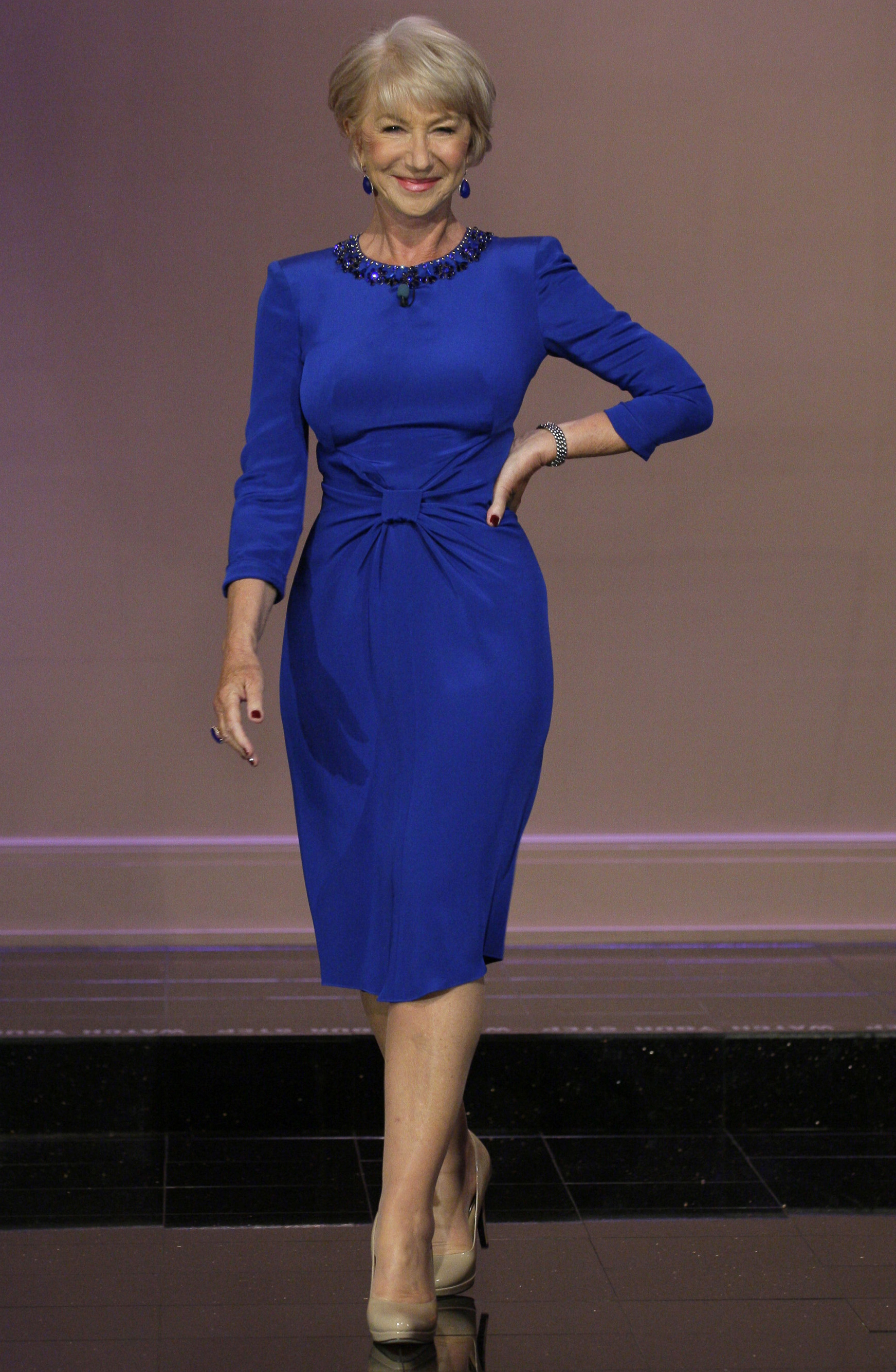 Skinny pants, including leggings, jeggings, and skinny jeans, are a fashionable addition to any wardrobe and open up a world of possibilities for women to be stylish and comfortable. Lots of things go with skinny pants, but it can be overwhelming to find the right items with so many options available. Show your style with the best things to wear with those leggings and jeggings.

It’s easy to turn a basic pair of skinny pants into something amazing with a good pair of high-shafted statement boots. Flat riding boots with a loose sweater and leggings makes a perfect outfit for running errands, or you can dress things up with heeled tall boots, jeggings, and a leather jacket for a chic outfit for a night out. One of the easiest ways to look put together is to pair your skinny pants with an oversized button-down shirt. Try a white or chambray shirt with light jeggings for a casual look, or wear a patterned button-down with dark skinny jeans and heels for a more office-appropriate outfit. It’s hard to go wrong with this combination, so play around with different tops and pants to find the perfect look that is effortlessly sophisticated.

Skinny pants can make even a simple t-shirt look stylish. Wearing a simple t-shirt or a graphic tee is a great way to show some personality while still be comfortable as you’re out and about. For an edgier look, try an oversized graphic t-shirt tucked into distressed skinny jeans with a denim jacket, or go for a plain t-shirt and fun leggings and tennis shoes for a stylish outfit for running around town. 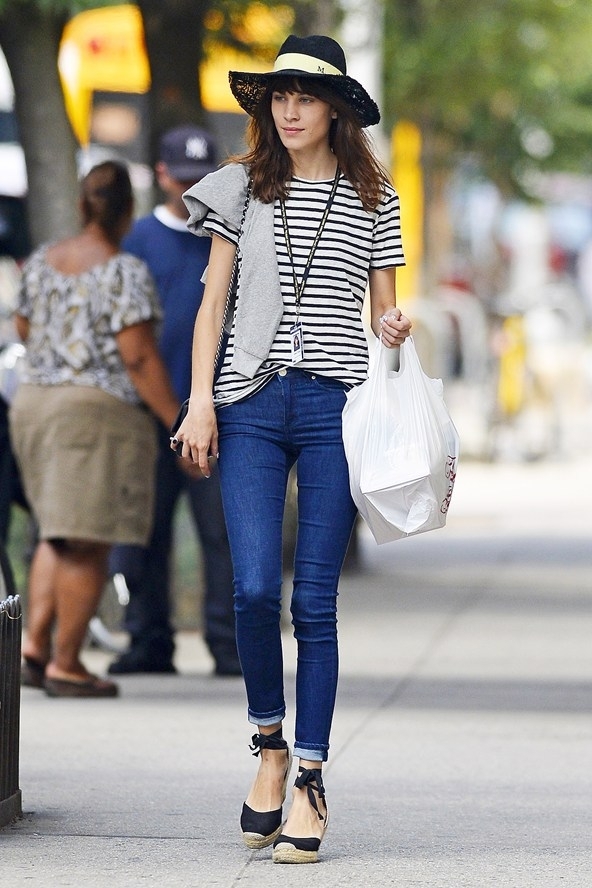 Even worn-in skinny pants can go to the next level with a great blazer. Adding a simple accessory can make the pants perfect for the office or just create a chic ensemble for a night out. A stylish blouse, classic pumps, and a tailored blazer work well with dark skinny jeans for a stylish office look, and an oversized sweater, bright blazer, and distressed jeggings can take the outfit out on the town. In general, try to pair bright blazers and jackets with darker washed pants for a more sophisticated look. The same idea also applies throughout the winter—a fun statement jacket can dress up any pair of skinny pants and make it appropriate for the season and stylish.

Skinny pants don’t always have to be dressy—they also look great dressed down. Pair a running tank with leggings and tennis shoes for a comfortable athleisure look that can take you from running errands to running at the gym. An oversized hoodie and sneakers works great with jeggings to keep you comfortable and street stylish for just about any activity. 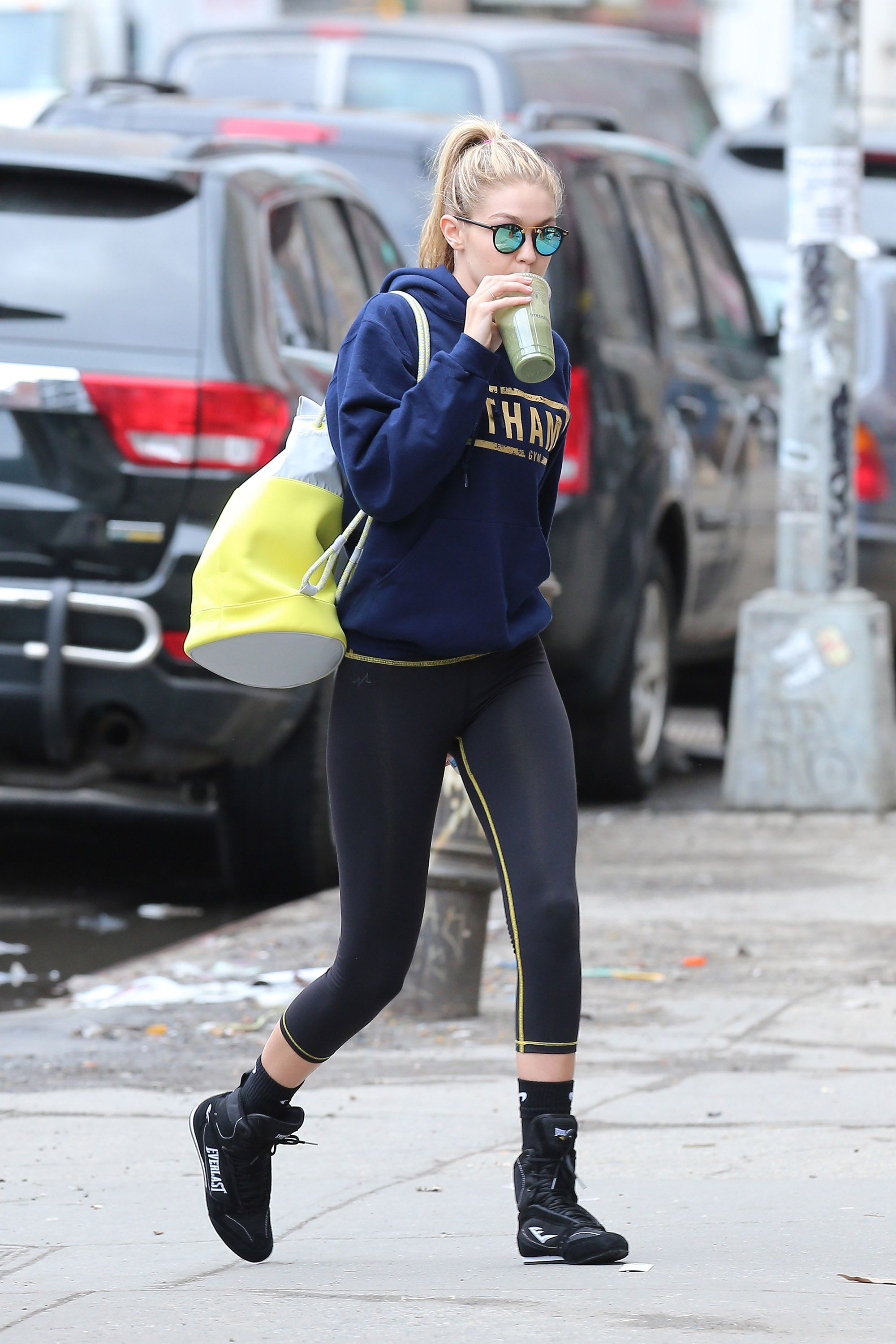 Some women are scared to wear shorter shirts with skinny pants, but tunics are the perfect flattering option that look great with all kinds of skinny pants. Tunics tend to hit around the mid-thigh and can be worn a number of ways. Try it with a belt and skinny jeans for a dressier look to highlight an hourglass figure, or wear a fun patterned tunic with leggings for a stylish look that is flexible and comfortable. Part of the beauty of skinny pants is that they can extend many other items in your wardrobe, including shorter skirts and dresses. A short summer dress can be worn with leggings during the colder months—just add a cute pair of booties, a jacket, and a scarf to make it more appropriate for the season. Even a fancier dress can be made more casual by pairing it with leggings and flats or tennis shoes for a pulled together look that can take you anywhere.

When you know how to wear them, skinny pants can become a staple of your wardrobe and open your closet to many new clothing ideas. Get creative with what you wear with skinny pants and enjoy the comfort and style that comes from the pants.