As one of Team GB’s most glamorous supporters, The Duchess of Cambridge has perfected a style that is both chic and smart, but does not draw undue attention from the athletes. It seems in the last few days that when she hasn’t been wearing official TEAM GB pieces that polo tops and tracksuit jackets, that she has stuck to a wardrobe of skinny jeans teamed with a blazer, and a palette of mainly (what else?) red, white and blue.

The Smythe blazer made a second appearance this week when it was teamed with a Breton striped vest top – a real summer classic. Breton stripes are always such a cool look, and this was effortlessy chic from the Duchess. Every girl should have at least one striped top in their summer wardrobe as they just look great in so many combinations – from wide leg palazzo pants, to denim skirts or tiny shorts. Kate’s version was a vest top, but something with sleeves means that this top will take you right into Autumn with ease.

Get the look – Breton stripes 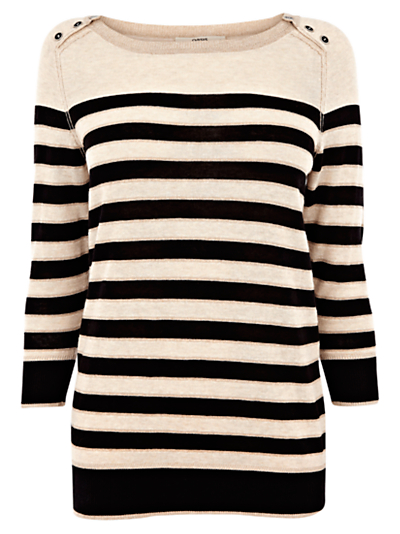 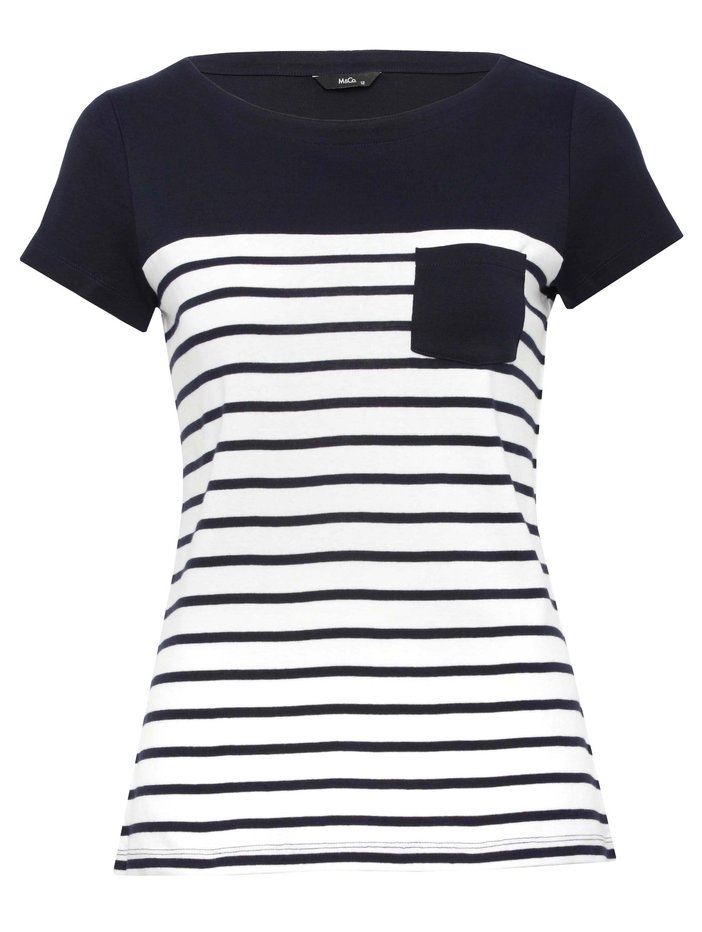 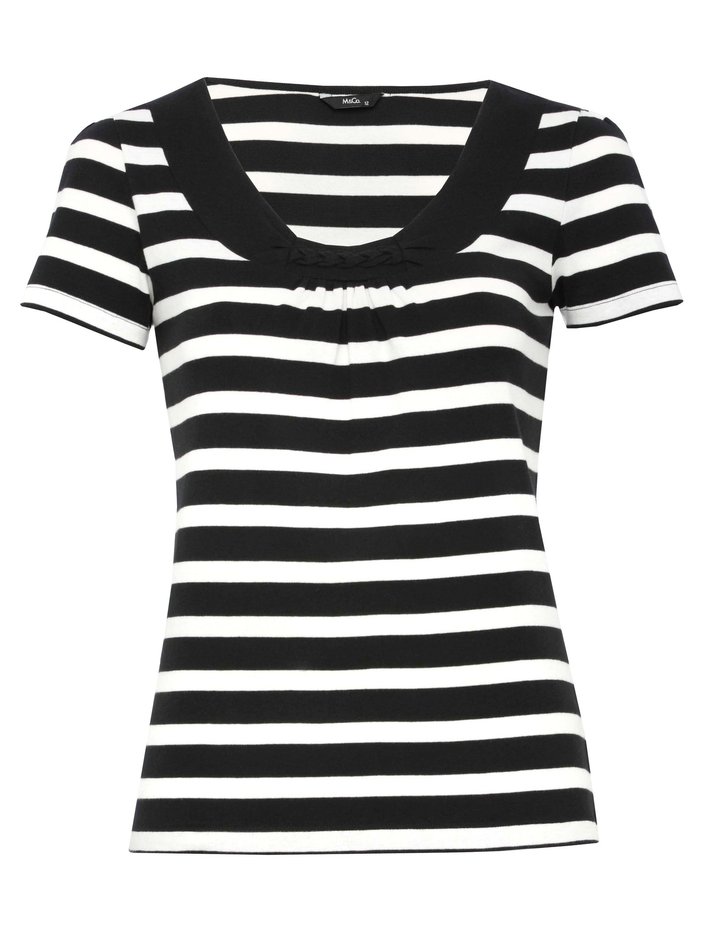 One of my favourite looks from the Olympics s far has been Kate’s red blazered look. I love the vibrancy of red, and when teamed with polka dots I think this is just genius. Kate’s blazer was another high street hit, this one from Zara, and it is still available online for £69.99. Kate teamed this with black skinny jeans for a smart casual look which again worked really well for the occasion. 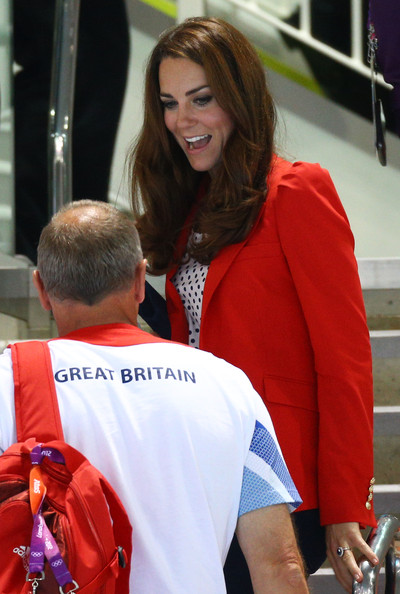 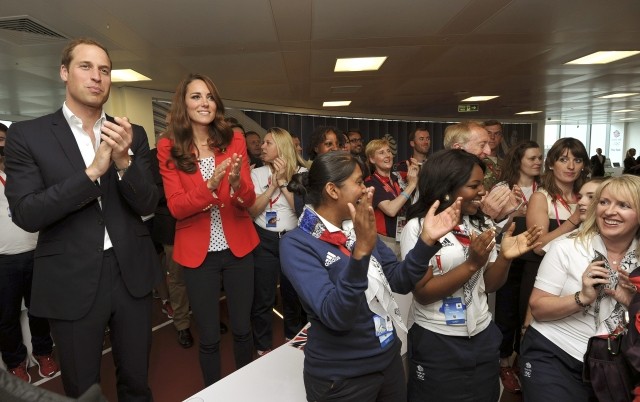 Get the Look – dotty tops 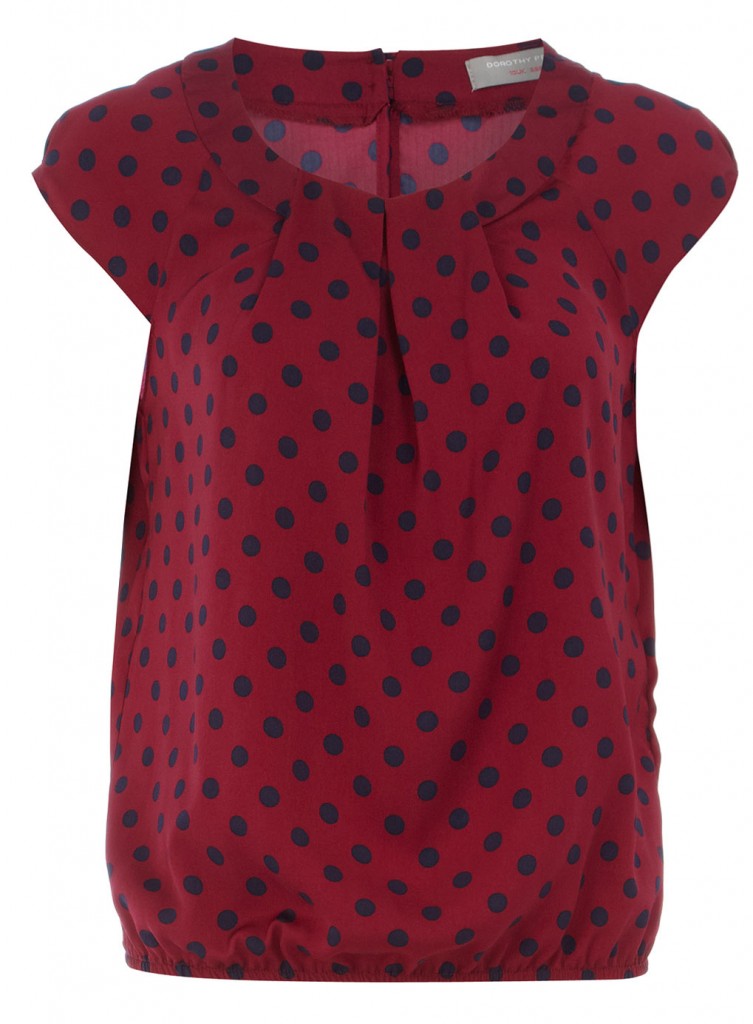 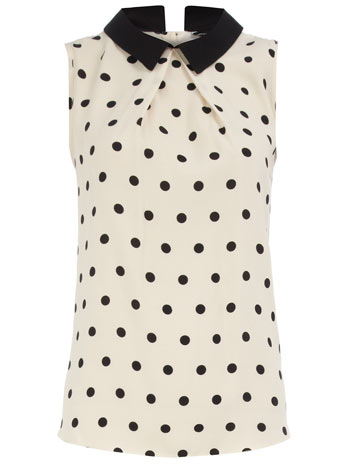 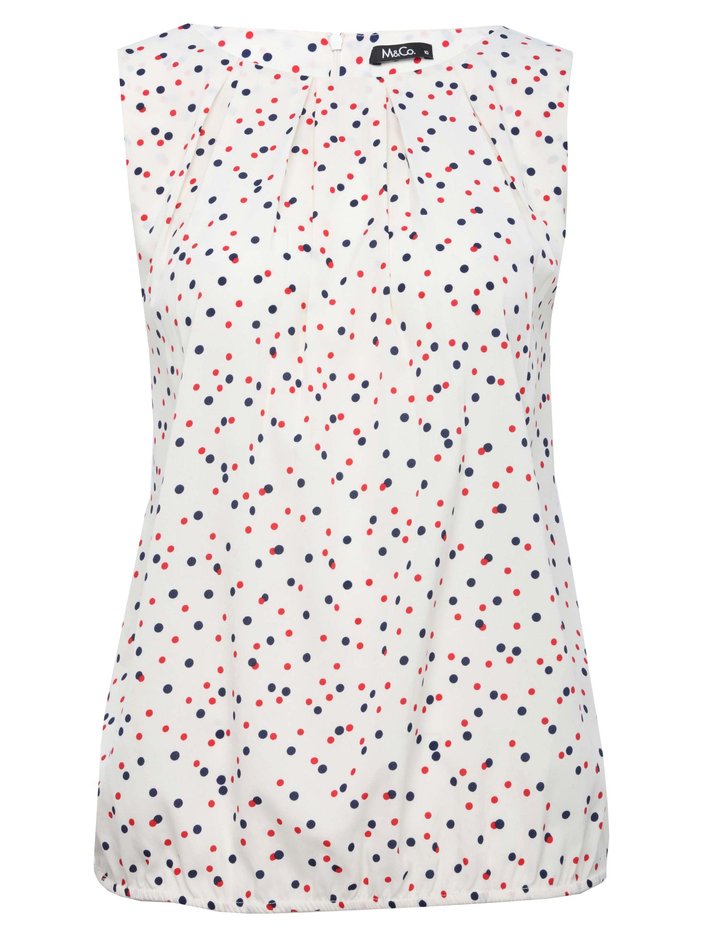 As an avid Duchess of Cambridge watcher, I am totally obsessed with her wardrobe. But more and more lately, I am having instances of deja vu, as Kate recycles her outfits over and over again. And I have been struck by a thought. This recycling is not just about Kate being frugal, or making that wardrobe earn its keep. This is also about everyone knowing that Kate is thrifty, everyone recognising that in this time of economic hardship, the Duchess is trying hard not to flaunt her extravagance.

Kate is not the first Royal to recycle her outfits. The Queen and Princess Anne have both recycled outfits for years, the Queen actually wore a cloak for the Jubilee concert that she had first worn for a photograph in 1968. Even the late Princess of Wales recycled outfits, often having them restyled – sleeves removed from dresses, lengths of skirts shortened etc. A example of this was the salmon pink suit that Diana wore as her going away outfit in 1981, and then wore again on a royal tour a few years later with a longer sleeved jacket and a different hat. 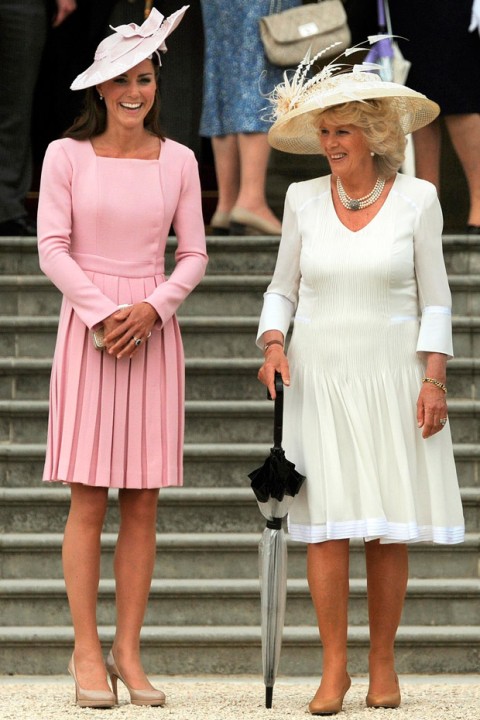 But this seems to be the key, and where Kate differs from previous royal recyclers. The other royal ladies tried to leave a decent sized gap between wearing their outfits again, almost in order for people to forget them, or they had the outfit remodelled or restyled so that it looked like something brand new. But I think Kate wants people to realise she is wearing the same outfit again. Take the Emilia Wickstead soft pink dress that she wore to the Buckingham Palace garden party. Kate was seen in that dress for two official occasions with less than two weeks between them. There was no danger that people would’ve already forgotten a dress only so recently seen. And you could say that Kate’s like the rest of us, if it looks good and feels good you want to wear it again and again, but I really don’t think that is the reason for wearing this dress so soon after its first wearing.

In the same vein, the Missoni jacket that Kate was wearing in Nottingham last week was the same one worn at Fortnum and Mason earlier in the spring, teamed with a hat also seen earlier this year. Another instantly recognisable piece, if only because the Missoni jacket had attracted discussion for the Italian label – with questions about if Kate should be buying and wearing British.

Last weekend, after the wonderful display of (new) McQueen that Kate had sported during the Jubilee celebrations, it was business as usual when Kate attended a Spencer family wedding. The gorgeous Jenny Packham dress which she wore to the polo during last years tour of the US and Canada,  had another airing, teamed with the Katherine Hooker coat worn for last years Order of the Garter. I think she looked beautiful and this was a nice way of not upstaging the bride by wearing a brand new outfit that would have got the fashion world buzzing again.

I also think that Kate’s frugality is something which separates her from the clothes-horse princesses of Europe. Mary of Denmark and Madeleine of Sweden are known as fashionista’s who spend large amounts on clothing. Kate seems content to continue to wear High Street looks for key occasions, or just to recycle something she’s worn before. The pretty teal dress that Kate was seen in for The Art Room performance of The Lion, the Witch and the Wardrobe was, you’ve guessed it, from High Street fave Zara. 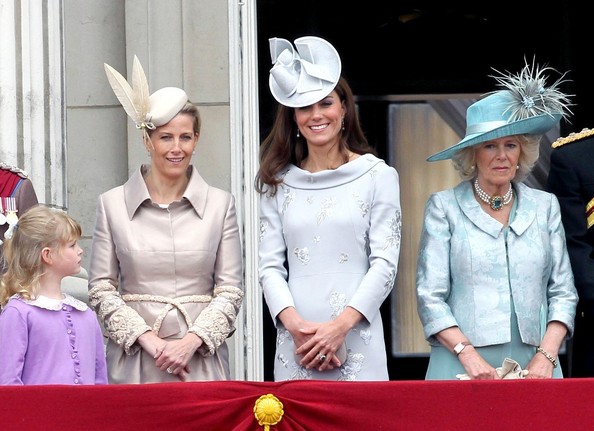 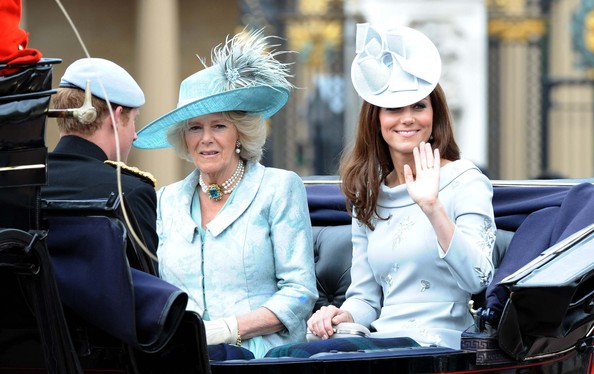 But Kate still knows how to wow her audience like no other British lady at the moment, when she does choose to wear something new. A key example of this was the gorgeous Erdem silver-embroidered dress that Kate looked so fabulous in at the Trooping the Colour this weekend. This proved to be a new outfit worth waiting for.

The temperatures have dipped and now Pippa Middleton is showing us how to get an Autumn look that keeps you  snug without compromising on style. Bright coloured coats, animal print scarves and black basics are a simple, yet effective look which are proving that Pippa has a cold weather style almost as smoking hot as her summer looks.

I love the Sara Berman Yvette coat that Pippa is wearing below.It has a 1950s teddy boy feel that lends itself to this season’s androgynous look. The coat is available from my-wardrobe.com for £396.  Like sister Kate, Pippa is showing support for the ethical label Beulah London, wearing the Shibani scarf from the label that aims to help the victims of sex trafficking. This costs £80, but you can find cheaper alternatives on the high street and web. 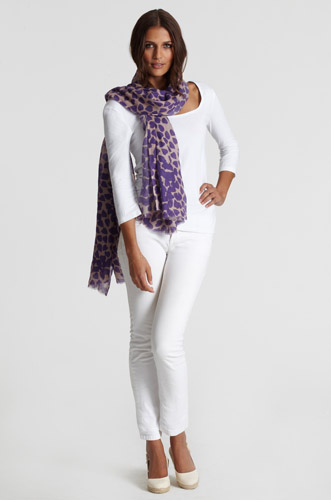 Get the Pippa look  for less. 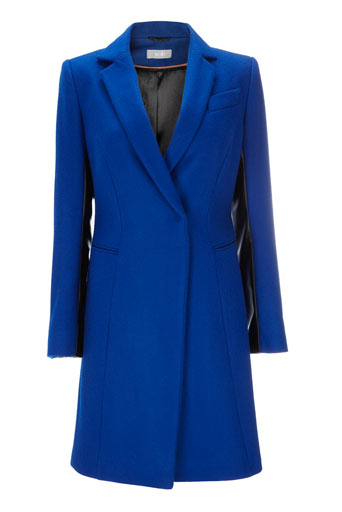 Pippa is clearly a believer that duller days don’t have to mean muted shades. She had sported this fabulous coat from Zara  last week in a glorious shade of burnt  orange. It looked amazing when teamed with the Panthera black and white  scarf by Alice by Temperley. This coat is almost a pea coat style, and is perfect for petite girls, or  those who hate full length coats. The coat is currently available on the Zara website for £79.99, and the scarf is £54.99.

And  in more Pippa news…

The  Debenhams version of the bridesmaid dress that launched the bottom is now available to buy. Launched at  the Oxford Street store with Pippa lookalike Jodie Bredo, this dress has had a big build up, with a lady-in-waiting list being established for those who wished to get the Pippa look. The dress will be available at 54 stores nationwide, and also online at Debenhams.com. Click here to visit site. 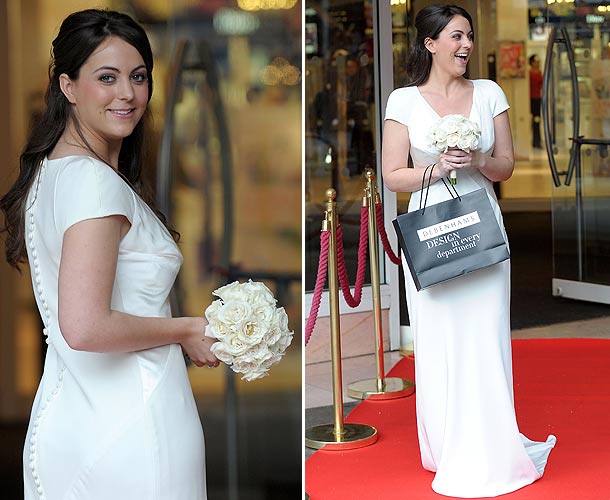 Debenhams also have a pretty good  lookalike for Pippa’s saucy red Temperley evening dress that she wore to the Boodles ball. 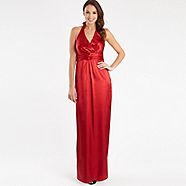